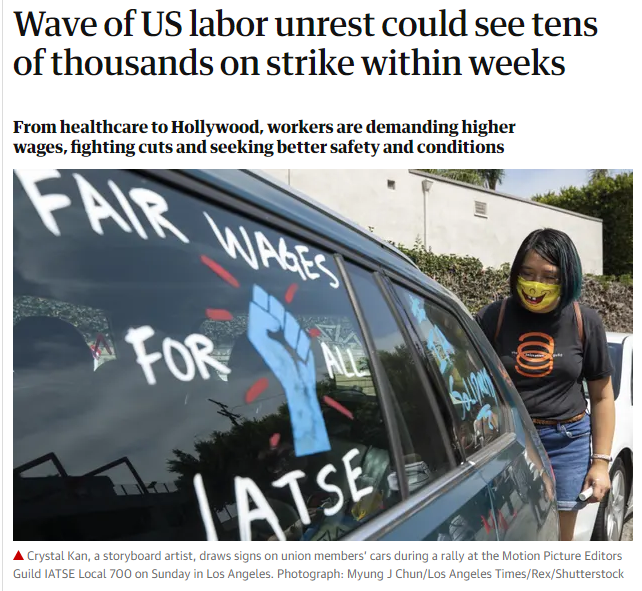 Tens of thousands of Workers across the U.S. could go on Strike in the coming weeks in what would be the largest wave of Labor unrest since a series of Teacher Strikes in 2018 and 2019, which won major victories and gave the American Labor Movement a significant boost.

The unrest spans a huge range of industries from health care to Hollywood and academia - and is largely focused on higher wages, fighting cuts and better working and safety conditions, especially in light of COVID-19.

It also plays out against a backdrop of an economy bouncing back from the torrid experience of widespread economic shutdowns during the Coronavirus Pandemic, but one that is still marked by profound inequality.

However, the pandemic is also seen as potentially providing a shot in the arm for U.S. Labor Unions by increasing bargaining power amid increased Union Drives and labor shortages in some industries.

About 24,000 Nurses and other Health Care Workers at Kaiser Permanente in California represented by the United Nurses Associations of California/Union of Health Care Professionals are voting on a Strike Authorization.

The Union took issue with Kaiser Permanente’s 1% wage increase for Workers, cuts to wages for new Staff and benefit cuts in the company’s most recent offer.

“We have people burned out, complaining of mental health issues and PTSD.  We’re in a situation as a Union where we’re concerned about the future of nursing, (and) how we recruit and retain Nurses and other Health Care Professionals,” said Denise Duncan, the President of UNAC/UHCP and a Registered Nurse (RN).

About 700 Building Engineers at Kaiser Permanente in the San Francisco area are already on Strike.

Other Unions representing thousands of Workers at the company with expiring Union contracts are considering Strike Authorization Votes.

After four months of negotiations with the Alliance of Motion Picture and Television Producers (AMPTP), the International Alliance of Theatrical Stage Employees (IATSE) just announced a Strike Authorization vote for 60,000 Workers across the Film and Television Industry in the U.S.

If the Union moves forward with the Strike, it would be the first among Hollywood Production Workers since World War II.

To Continue Reading This Labor News Report, Go To: www.theguardian.com/us-news/2021/oct/01/us-labor-unrest-unions-strikes