As Striking CWA-Represented Nurses Continue To Walk The Picket Line Outside South Buffaloâs Mercy Hospital In A Battle Over Patient Care, How Can Catholic Health âNot Pay Them - But Bring In Nearly 200 Out-Of-Town Caregivers At $150 An Hour?â 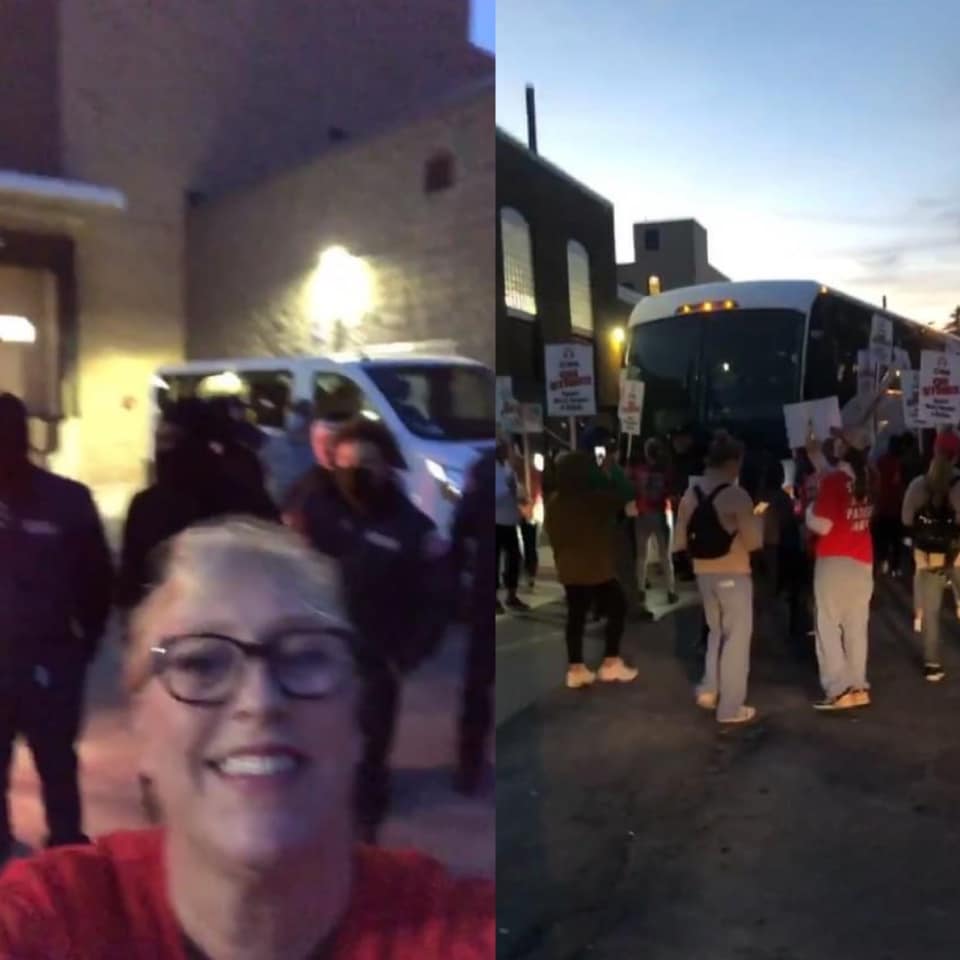 WNYLaborToday.com Editor’s Note: Pictured above, Communications Workers of America (CWA) Local 1168 Director of Mobilizing and Organizing Mary Nowocien is standing with her striking CWA Local 1133 Brothers and Sisters who are walking the picket line outside South Buffalo’s Mercy Hospital.  Nowocien, who’s worked as a Licensed Practical Nurse (LPN) since 1987, has posted a number of live videos on the Social Network Facebook as striking CWAers protest Catholic Health’s use of out-of-town Scabs, who are being paid an astronomical $150 an hour, to replace its striking Employees.  “It’s ‘immoral, it’s unethical and it makes no sense,’” she tells WNYLaborToday.com.  (WNYLaborToday.com Screen Capture)

(BUFFALO, NEW YORK) – It’s a good question to ponder: As striking Communications Workers of America (CWA)-Represented Nurses continue to walk the picket line outside South Buffalo Mercy Hospital in a battle over safe staffing and a fair contract, how can Catholic Health not pay them, but afford to bring in around 200 out-of-town Caregivers at $150 an hour?

Ask Communications Workers of America (CWA) Local 1168 Director of Mobilizing and Organizing Mary Nowocien (pictured below) - who’s standing with her Local 1133 Brothers and Sisters who are walking the picket lines and helping lead protests against out-of-town Scab Workers hired by Catholic Health, and she’ll tell you: “It’s ‘immoral, it’s unethical and it makes no sense.’” 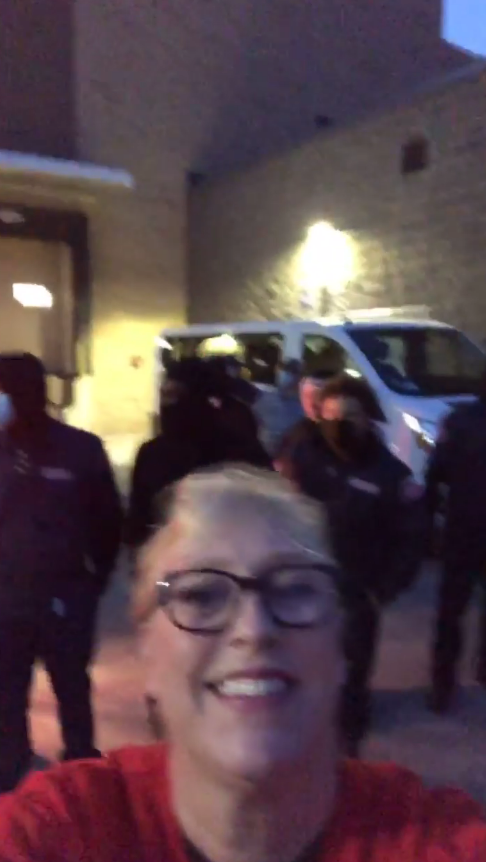 If you scour the Social Network Facebook, you’re bound to find a number of live videos posted by Nowocien, who’s worked as a Licensed Practical Nurse (LPN) since 1987 - the last 15 for Buffalo’s Kaleida Health System, as the Scab Workers are bussed in to Mercy Hospital as the sun comes up.  Her voice rises as she narrates what’s occurring - and make no mistake, she and her fellow CWA picketers are extremely unhappy with what Catholic Health has chosen to do. 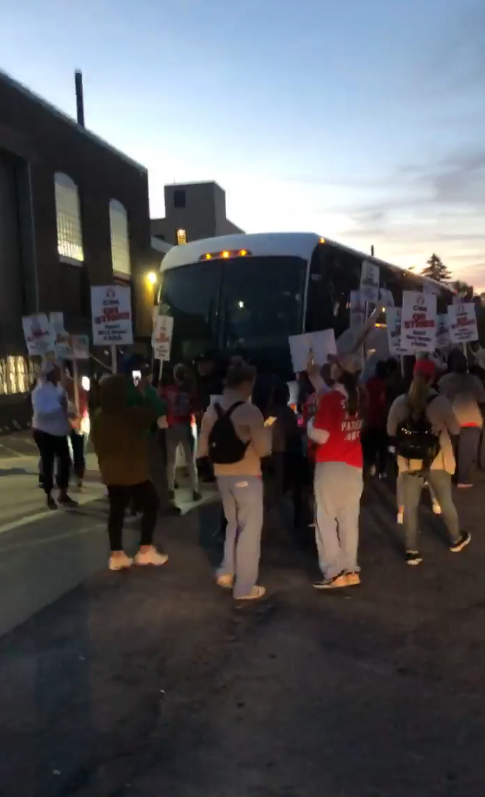 “(Catholic Health) is paying these Scabs ‘($150) an hour and provides them with a daily ($45) for their meals) - but they are not willing to pay’ (their striking CWA Local 1133-represented Employees anywhere near the same).  “It’ ‘disgusting and hurtful and shows (Catholic Health’s) disrespect’ (for its Workforce),” she told WNYLaborToday.com Sunday (October 3rd) evening, taking some time to rest before being back out on the line today (Monday, October 4th).

Around 1,900 CWA Local 1133-represented Caregivers and Workers began their Strike against Catholic Health on Friday (October 1st) as their current contract expired with no new deal.

Seeking more staffing, more supplies and fair wages, they took to the streets outside the South Buffalo Medical Facility - vowing to continue their fight for better patient protections and to hold Catholic Health accountable for what it should be doing for its Essential Health Care Heroes that they had so proudly and publicly proclaimed during the Coronavirus Pandemic.

CWA District One Area Director Deb Hayes took part in daily news conferences held outside Mercy Hospital on Friday, Saturday and Sunday -0 telling WNYLaborToday.com on Friday: “‘No one can go into that hospital and do what we do in providing our patients with the best care.’  Scab Workers ‘won’t do the job that we do and for Catholic Health to invest millions of dollars to bring Workers in and not invest in their Employees…’  ‘We’ve done everything that have been asked of us (during the pandemic), but we can’t do it anymore’ (under the current circumstances).  ‘Don’t make us out to be the bad guys.’” 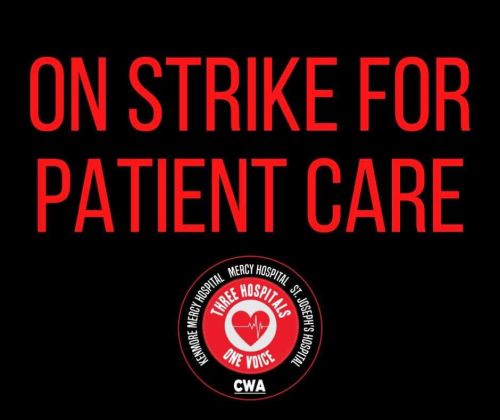 During Sunday’s news conference, Mercy Hospital Registered Nurse (RN) Jillian Trageser said: “Two years ago I worked on a medical surgical floor ‘taking care of no more than two’ patients. ‘Now, Nurses are assigned ten or more patients on a daily basis.’  ‘Overnight, it’s not uncommon for one or two staff to clean the entire’ hospital.  ‘Cleanliness during a pandemic should be the gold standard.’”

The CWA Bargaining Team was back at the negotiating table on Sunday morning, but Union Officials said Catholic Health failed to show up.

“We’ve made clear that we are ready to come back to the bargaining table and hear Catholic Health’s latest proposal, after Workers ‘rejected’ the hospital system’s ‘last minute, inadequate offer’ early Friday ‘that didn’t include minimum’ staffing ratios, ‘which are fundamental to ensuring high quality patient care and preventing another understaffing crisis in the future.’  ‘We have a responsibility to our patients to stand up for a fair contact that ensures their safety, and we’ve put forward a comprehensive proposal that does that,’” Hayes said. 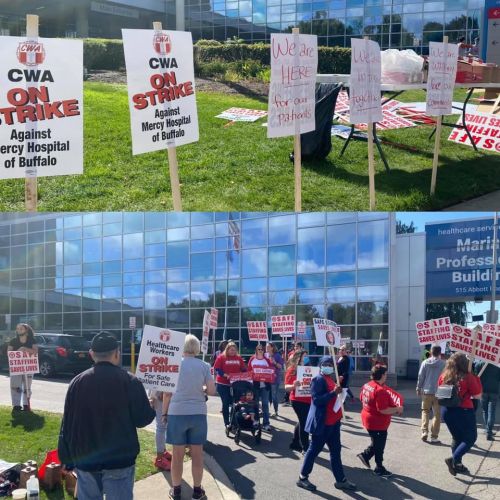 “We ‘want to have a dialogue and get back to work as fast as we can, but Catholic Health needs to come to the table in order for that to happen.’  We ‘repeatedly informed’ Catholic Health all throughout Saturday that we would be at the bargaining table at (10 a.m.) on Sunday, ‘a reality they acknowledged by resending the proposals we rejected’ Friday morning.  ‘Is Catholic Health stone-walling its own workers because it already pre-paid millions of dollars to a temporary staffing agency, millions of dollars that could have gone into its own workforce and attracting more of the Workers we desperately need in our community?,’” Hayes said.

Reacting to Catholic Health’s claim that it was awaiting a response from CWA to its Friday proposal, Hayes said: “Catholic Health Workers ‘did formally respond.’  ‘We rejected your proposal.’  ‘We’re on Strike.’”

The CWA Bargaining Committee made clear that it is time for Catholic Health to come back with a proposal that has stronger and safe staffing provisions.

“‘Let me be very clear: Catholic Health let the staffing crisis in its hospitals become so bad, that these Health Care Workers feel the conditions inside are dangerous and unsafe for patients.’  We have Nurses ‘taking care of up to ten patients at once, we have one or two people responsible for cleaning the entire hospital every night,’” Cheryl Darling, an Immediate Treatment Assistant at Mercy Hospital and member of the Bargaining Committee said at the news conference.

CWA Local 1168 President Cori Gambini, an RN herself, added: “Our first proposal went over in February 2020.  ‘They did not respond to us for over a year.’”

Meanwhile, Nowocien hopes her employer – Kaleida Health, is “paying attention” to what is happening at Catholic Health and at Mercy Hospital.

CWA’s current contract is set to expire “in about eight months,” she said.

“I ‘don’t know if they realize it, but I think a message is being sent’ (to Kaleida),” she told WNYLaborToday.com.