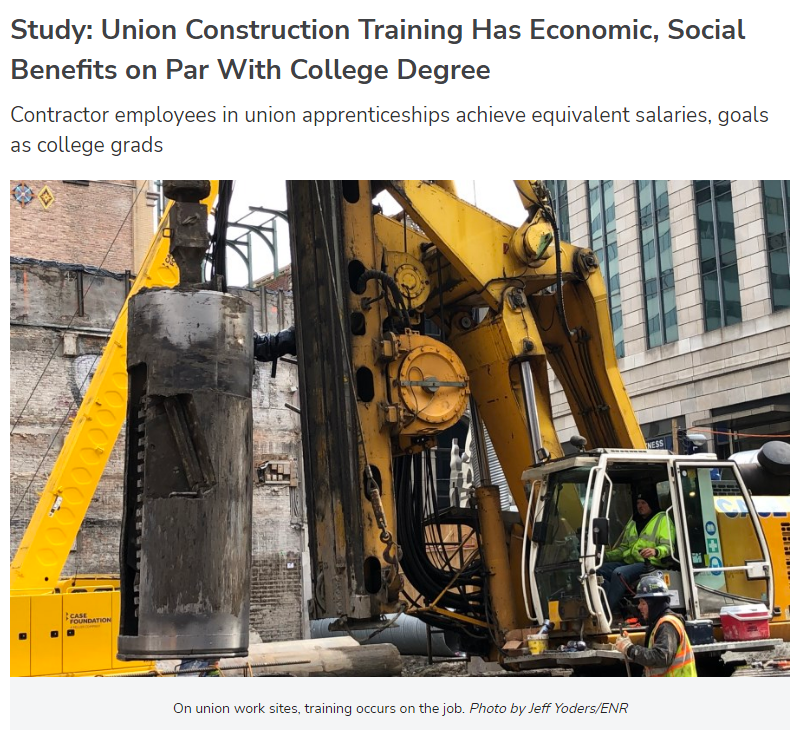 (LAGRANGE, ILLINOIS) - Union Apprenticeship Programs in the Construction Industry produce salary and social outcomes for Workers equivalent to the jobs and social situations of those with four-year college degrees, a new Union-backed study of 10 years of Federal Statistics concludes.

The Illinois Economic Policy Institute, a Pro-Labor/Non-Profit based in LaGrange, Illinois, analyzed data from the U.S. Census Bureau and Federal Bureau of Labor Statistics from 2010 through 2020.

The dataset reports individual-level information on about 98,000 households over the past decade.

The analysis found Union Construction Workers who graduated Joint Labor-Management Apprenticeship Programs earn an average income of about $58,000 per year, about halfway between all Workers with a two-year Associate's Degrees ($48,200) and all Workers with Bachelor’s Degrees ($68,600).

Union Construction Workers also have a private health insurance coverage rate of 89%, higher than Workers with the associate's degree (84%) and on par with those with a four-year Bachelor’s Degrees (90%).

Frank Manzo, Institute Policy Director and a co-author of the study, said that Labor-Management Apprenticeship Programs are, economically and socially, a good alternative to a four-year college degree.

"These programs offer Workers alternatives to college and create pathways into Middle Class Trades that are in high demand," he said. "In 2016 and actually 2020 we did similar studies that focused on Apprenticeship Programs in the state of Illinois and how they potentially increase access to the Middle Class and offer pathways to upward economic mobility in the state.  We thought it was important to take a look and see if the same was true across the country."

The study found that non-salary outcomes recorded by the Census Bureau and U.S. Department of Labor also aligned with what it found for salaries.

Only 4% of Union Construction Workers interviewed for the survey lived in poverty, 4% relied on Medicaid for health care, and 60% were married.

By contrast, 10% of Non-Union/Open Shop Construction Workers lived in poverty, 10% relied on Medicaid for Health Care, and 48% were married.

Only 2% of Workers with Bachelor’s Degrees lived in poverty, 3% relied on Medicaid, and 56% were married.

To Continue Reading This Labor News Story, Go To: www.enr.com/articles/52476-study-union-construction-training-has-economic-social-benefits-on-par-with-college-degree?fbclid=IwAR1aDER0VakNd1WO8F8F9yZ1SCuW3QioE8bc4t4d_unyfrhbqg2249Lqdkg#.YVYeLPcbfFM.facebook