Chipotle Workers Strike At The Queens Center Mall, Telling Their Employer Thatâs A Whole Load Of âGuacâ After Being Refused Wages During The Aftermath Of Hurricane Idaâ 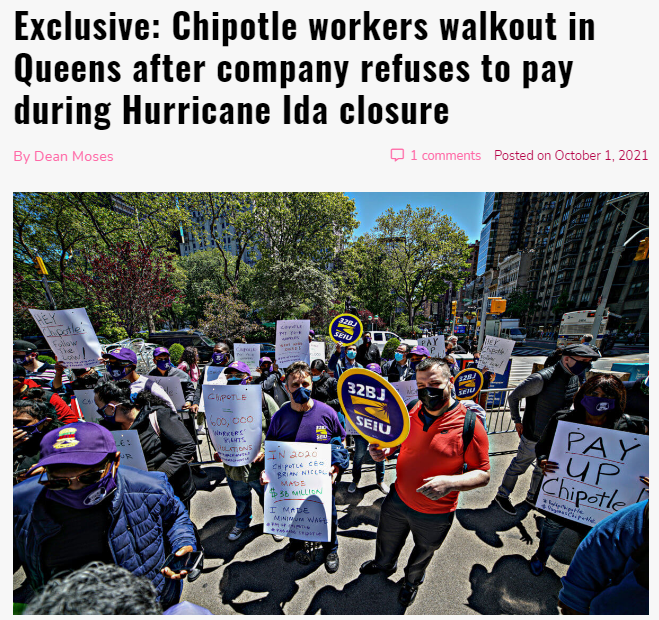 (QUEENS, NEW YORK) - Restaurant Workers at the Mexican grill have walked out the job and created a picket line with the help of 32BJ Service Employees International Union (SEIU) after they say the fast-food chain blew them off during the remnants of Hurricane Ida in early September.

Speaking exclusively to amNewYork Metro, several Employees said they were left in limbo after the devastating storm flooded the mall’s food court, explaining they were not informed if/or when they could return to work.

With the eatery closed down for more than a week, Staff were left out of the loop waiting on a day-by-day basis for more information, and when the doors finally did reopen, they said they would not be compensated for their lost workdays.

“They waited for a whole week to finally tell us that they are not going to open and they won’t be paying us for the days we missed.  It is a lack of communication,” Caren Guzman told amNewYork Metro, who explained that she uses the money to help support her parents.

“Chipotle should realize that not only did we lose the days, I rely on the checks to help my parents out and to help with school,” Guzman added.

Roger Meza, a fellow striking Worker, echoed these sentiments: “I’ve been working for Chipotle for seven years now and, after all this time, I feel like Chipotle doesn’t care about Workers.  They say they care, but they don’t really.  Chipotle just wants to maximize profits and when an emergency like this happens, they just want to get the most bang for their buck, instead of taking care of us like they should.”

Many Workers also say this kind of treatment is nothing new.

While Staff are left to struggle with mounting bills - with which they don’t have a paycheck to face, they feel the company is content as long as they can maintain profits.

In an attempt to hit the company where to hurts, the workforce began a Strike outside the Queens Center Mall location where they are demanding their fair share.

According to 32BJ SEIU, in 2020, Chipotle raked in $6 billion in revenue and more than doubled CEO Brian Niccol’s pay from $16 million (in 2019) to $38 million - while Workers are left to fight for money they lost due to no fault of their own.

To Directly Access This Labor News Story, Go To: www.amny.com/news/exclusive-chipotle-workers-walkout-in-queens-after-company-refuses-to-pay-during-hurricane-ida-closure/