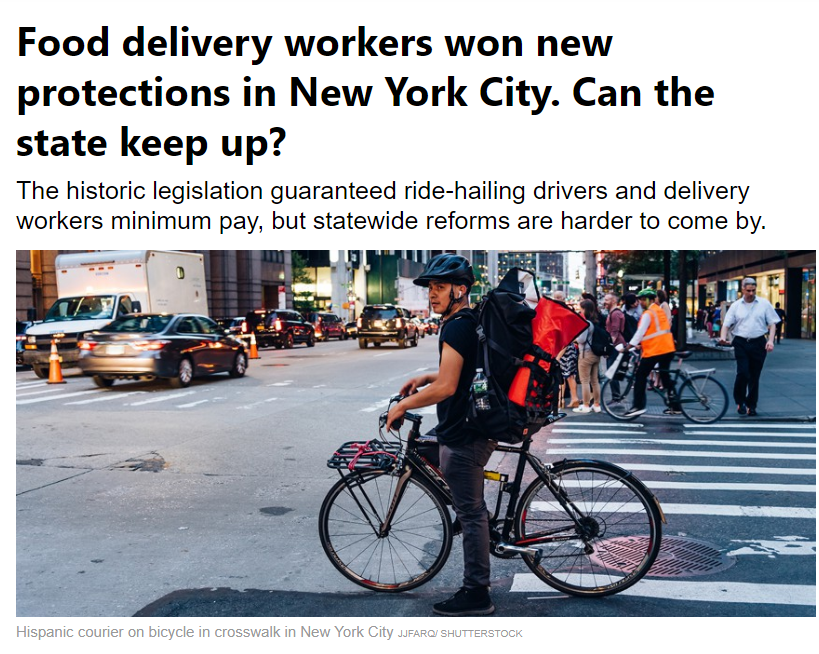 (NEW YORK CITY) - New York City has made history in recent years for establishing Labor Protections for several types of Gig Workers - who, because of their classification as Independent Contractors, don’t typically have the Labor Rights that Employees do.

First, it was the New York City Council passing Minimum Pay Rules for Ride-Hailing Drivers working for companies like Uber and Lyft in 2018.

And then, grassroots activism by Food Delivery Workers led to the Council’s just passage of Bills mandating minimum pay, protections for Workers’ tips, the right to use restaurant bathrooms, and more.

These gains for the city’s Gig Workforce have come even as attempts at the larger effort of reforming Gig Workers’ classification have stumbled and failed on the state level.

Earlier this year, a deal between Labor Unions and Gig Companies like Uber and Lyft fell apart after overwhelming criticism.

Los Deliveristas Unidos, the collective of largely Immigrant Delivery Workers who began the fight for these City Council Bills, was among the Worker Advocacy Groups left out of discussions over Worker Classification at the state level.

New York State Legislators - and even former Governor Andrew Cuomo, have made statements over the past few years on the need to extend traditional Labor Benefits to Gig Workers.

Disagreements about how to do that - whether Gig Workers should be classified as Employees, remain Independent Contractors or be granted benefits in another way - have impeded action.

Gig companies like Uber, Lyft and Doordash have lobbied hard against reclassifying Gig Workers as Employees, including most notably in California, where companies funded a ballot proposition to exempt them from a law that would reclassify their Workers.

“Let’s take this to Albany next,” State Senator Jessica Ramos, who chairs the Senate Committee on Labor, tweeted in reference to the Council’s package of Bills.

Ramos told City & State she’s working with Delivery Workers to figure out how to “scale up” the kinds of regulations and protections passed by the Council to the state.

“We’re analyzing all of the issues Delivery Workers face on a daily basis and when we’re ready to share, we will,” she said.

Hildalyn Colón Hernández, Director of Policy and Strategic Partnership at Los Deliveristas Unidos, told City & State their first priority is ensuring the successful implementation of the new protections and educating Delivery Workers about their new rights.

The Bills also have to be signed by Mayor Bill de Blasio, which he is expected to do - but statewide reforms, while perhaps further away, are nonetheless on their minds.

“This is just the beginning, a first step forward on building rights for Gig Workers,” Colón Hernández said. “We’re looking to the horizon, and definitely that conversation - what is going to happen at the state level - needs to happen.”

To Continue Reading This Labor News Report, Go To: www.cityandstateny.com/politics/2021/09/food-delivery-workers-won-new-protections-new-york-city-can-state-keep/185619/