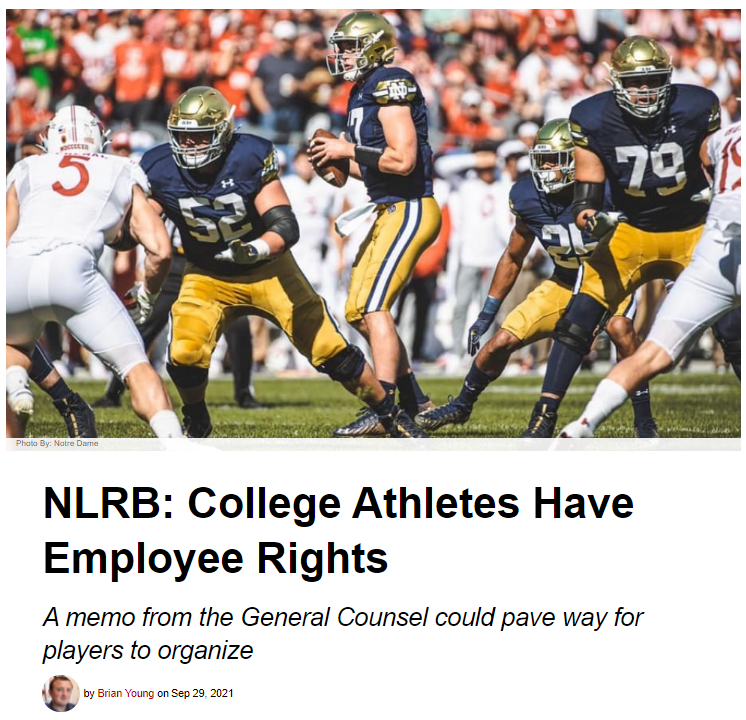 (WASHINGTON, D.C.) - On Wednesday (September 29th), the General Counsel for the National Labor Relations Board (NLRB) released a memo arguing that certain college athletes are Workers at their colleges and universities and are eligible to bargain collectively.

The memo also issued a warning to the schools and the NCAA to not run afoul of the players' rights.

Jennifer Abruzzo, who was appointed to be the NLRB’s General Counsel by President Biden, said in the memo she will pursue cases against schools, conferences, or other entities that tell players they don’t have the same rights as other Private Sector Workers.

The memo also lets players know that they have the right to protest and demand better pay and working conditions without retaliation from their schools, even if they are not Members of a Union.

This is the latest shift towards giving players more control over pay and their likeness.

Starting this year, NCAA players were allowed to profit off of their likeness after decades of being banned from making any money while in college for being an athlete.

This change came as courts and government entities have become less favorable to the NCAA’s arguments about preserving amateurism, especially as the NCAA, schools and coaches continue to rake in millions.

Abruzzo argued that while interpretations of Labor Law make it clear that college athletes deserve Employment Rights, “significant developments” in the law, NCAA rules, and the societal view of college athletes over the last two years have further strengthened this position.

She says these changes have shown that the traditional view of amateurism is an outdated concept and shouldn’t be used to restrict an athletes’ rights.

She went on to say that recent changes to allow players to profit from the likeness make them “much more similar to professional athletes who are employed by a team to play a sport, while simultaneously pursuing business ventures to capitalize on their fame and increase their income.”

While Abruzzo’s statement is an important move in the right direction, it would only apply to private schools since the NLRB doesn’t have jurisdiction over public universities.

However, if there are changes at a major private school like Notre Dame, the effect is likely to reverberate throughout the NCAA.

The NLRB General Counsel acts as a prosecutor for the Board so a memo informing the NCAA that she is looking for cases likely means that she has an interest in bringing a case to the full Board to challenge some of the amateurism rules.

She could also bring a case to the Board about players organizing a Union like Northwestern players did in 2015.

“If players at academic institutions feel like they want to choose a Union to represent them in discussions with their employer over wages or working conditions ... then they should be filing (Union Representation) Petitions,” Abruzzo said in an interview with HuffPost.

To Continue Reading This Labor News Story, Go To: https://ucommblog.com/section/sportspop/nlrb-college-athletes-have-employee-rights