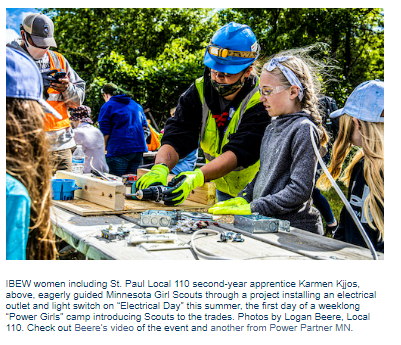 (TWIN CITIES, MINNESOTA) - Before the fun began with hammers and drills and simulated sections of wall, leaders at the Power Girls camp north of Minnesota’s Twin Cities had a question for Journeywoman Jackie Bobick and her IBEW (International Brotherhood of Electrical Workers) Sisters: How many of them had been Girl Scouts?

“Nobody raised their hands,” said Bobick, a veteran Member of St. Paul IBEW Local 110. “We didn’t even know any Women in construction who were.”

But future Tradeswomen likely will, gauged by the curiosity and glee of Girl Scouts at their camp’s first-ever “Electrical Day” that was held in June.

Guided by Women from the IBEW and signatory contractors, girls from 4th grade through high school discovered what’s going on inside the walls of their homes as they learned to install a light switch and outlet.

“I don’t know how many times I heard them say, ‘This is so cool!’ Bobick said.

Some of the girls literally jumped for joy when they push in a plug or flip a switch and see their boards electrify.

“They love to make something work,” said Breanne Hegg, Vice President of Programs for Girl Scouts in Minnesota. “It’s so satisfying to see that lightbulb go off on their head.”

Other days that week at Camp Lakamaga, the 68 campers learned about construction, tiling and energy efficiency through sustainable design - but it was only fitting for a camp dubbed Power Girls that Women Electricians kicked it off.

“These girls are amazing,” said Fifth-Year Apprentice Nikki Heather of Rochester, Minnesota Local 343. “They’re just full of energy and they want to learn.  This is going to be our future.”

The camp’s picnic tables-turned-worksites were beehives of activity for small groups of girls divided by age.

“It’s really important that the girls are exposed to this now,” Heather said. “It gets the gears going, gets the juices flowing that maybe they want to go into a Trade.  There are some that are so ready to take on the world.”

That’s the biggest lesson that every adult involved - Women and Men alike - wanted to drive home: that no career is off-limits to girls today.

“It shows that Women can do everything in the electrical trade,” Colvard said. “And we certainly need more Women in our Trade.”