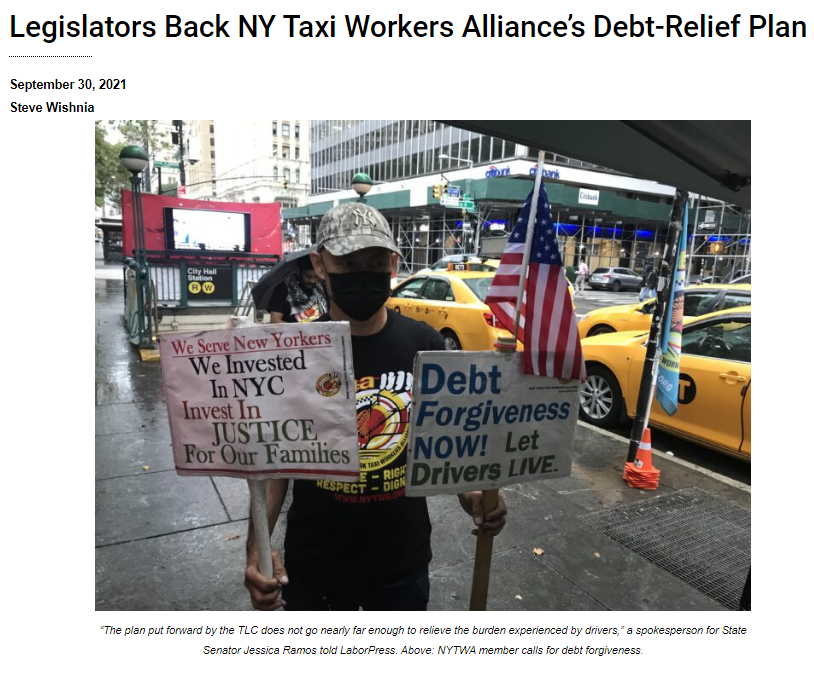 “They should add more millions of dollars.  What we have seen right now is not enough,” Rodriguez (Democrat-Manhattan), the Chair of the Council’s Transportation Committee, told about 20 Cabbies at their vigil on the sidewalk outside City Hall on Tuesday (September 28th), next to parked yellow cabs with “Debt Forgiveness Now! Save Drivers’ Lives” signs taped to the windows.

The city Taxi and Limousine Commission’s (TLC) plan would appropriate $65 million to give Drivers overwhelmed with debt $20,000 for a down payment on the principal they owe, and another $9,000 to help with the first year’s monthly payments.

That debt is now far more than the medallions are worth, as their value collapsed when Uber and Lyft devastated Drivers’ income and the COVID-19 Pandemic decimated what was left.

Marblegate, the Connecticut investment firm that bought up the right to collect more than 3,000 Drivers’ loans at a substantial discount, has offered to reduce those debts to $275,000, with a $1,600 monthly payment.

NYTWA’s plan would have the city guarantee the loans, paying off the full balance if Drivers default.

In return for those guarantees, the lenders would reduce loan balances to $145,000, with monthly payments set at $800.

That guarantee, NYTWA Executive Director Bhairavi Desai told the vigil, will give the city enough leverage to get the lenders to reduce debts and would also protect Drivers from having their homes or cabs seized.

“Our proposal is far more sound,” Desai told LaborPress after the rally. “What we care about is the new principal and the new monthly payments.”

Owner-Drivers testifying at the TLC’s hearing on Monday (September 27th) said the $2,000 a month proposed by the Commission in exchange for a 40% reduction in debt, or the $1,600 offered by Marblegate, older Drivers could work 60 hours a week for the rest of their lives and still not pay it off.

Ramos (Democrat-Queens), the Chair of the Senate Labor Committee, said at the TLC hearing that the inflation of medallion prices was a “speculative loan bubble created by the city of New York” and that “predatory financial institutions” had taken advantage of Immigrant Drivers.

Meanwhile, Members of the NYTWA continue to maintain a memorial vigil on Broadway for all the Drivers who have succumbed to suicide because of impossible debt.

“The plan put forward by the TLC does not go nearly far enough to relieve the burden experienced by Drivers,” a spokesperson for Ramos told LaborPress. “While it’s commendable that they provided ($65 million) towards debt relief, the way the money is being leveraged to restructure Drivers’ debt serves the banks, not the Drivers.”

To Continue Reading This Labor News Report, Go To: www.laborpress.org/legislators-back-ny-taxi-workers-alliances-debt-relief-plan/