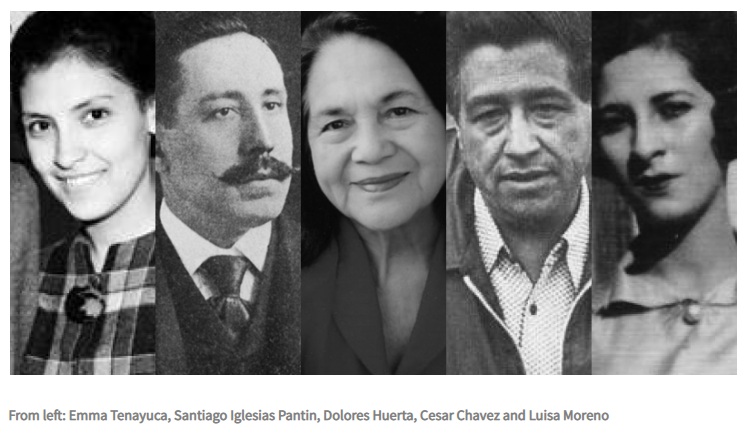 Hispanic Workers have played an important role in the history of the Nation and the Labor movement.

Here are five Labor Leaders who have made important contributions to work in America:

Cesar Chavez - One of the country’s most famous Labor Advocates, Cesar Chavez led the United Farm Workers of America. Embracing non-violent acts of civil disobedience, Chavez drew attention to discrimination and brought about policies that improved working and living conditions for Farmworkers around the country.  For Chavez, strikes and other forms of peaceful protest were tools for improving the lives of others.  “The fight is never about grapes or lettuce. It is always about people,” he said.

Santiago Iglesias Pantin - An outspoken advocate for Workers’ social and economic well-being, Santiago Iglesias Pantin served as the American Federation of Labor’s Organizer for Puerto Rico and Cuba at the start of the 20th Century.  When The San Juan News accused him of violent agitation, Iglesias defended himself, saying: “My mission is most eminently American. For the organization of the Working People, for their education and for their liberty.”  He was the resident Commissioner of Puerto Rico from 1933 until his death in 1939 and his successor, Bolivar Pagan, described him as “the main voice heard in a forty-year fight to raise up conditions of labor, to make the common man be conscious of all the rights and privileges under American Democratic institutions.”

Emma Tenayuca - Mexican American Labor Organizer Emma Tenayuca participated in the 1933 walkout of Women Cigar Workers and later helped form two International Ladies' Garment Workers' Union Locals.  She also protested border patrol abuses, led demonstrations and strikes, and advocated for Mexican Immigrant Workers’ right to Unionize without fear of deportation.  In 1938, when Tenayuca was in her early 20s, she led a Pecan Shellers’ Strike after factory owners sliced wages.  The Strike was one of the largest in U.S. history and one of the first significant Labor equity victories for Mexican Americans.

While they came from different background and worked in different industries, Chavez, Huerta, Iglesias, Moreno and Tenayuca all recognized that a fair day’s work deserves a fair day’s wages, and their sacrifices and leadership have contributed to safer, healthier, fairer working conditions for all of America’s Workers.

To Directly Access This Labor News Report, Go To: https://blog.dol.gov/2021/09/15/5-hispanic-leaders-who-changed-labor-history