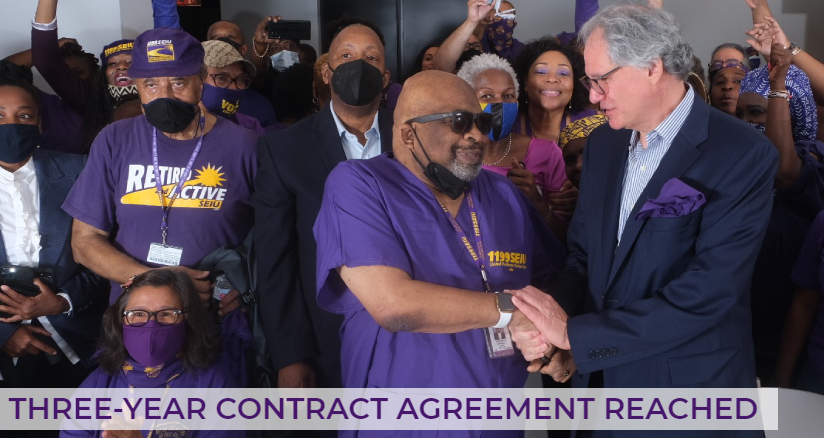 The agreement covers approximately 78,000 Employees represented by 1199 SEIU at about 90 hospitals and nursing homes in New York.

“1199 Health Care Heroes have been through so much over the last eighteen months and it was critical that the contract reflect their sacrifices through wage increases, while also maintaining their stellar health, pension, educational and child care benefits,” 1199 SEIU President George Gresham said. “We are also proud that this contract formally recognizes the importance of Juneteenth in our Nation’s history and allows (1199 SEIU) Members at League facilities time to celebrate and recognize the day when freedom became a reality for every single American.”

“Our goal has always been an agreement that is fair, reasonable and responsible for all of us and this agreement is all those things,” League of Voluntary Hospitals and Homes President Marc Kramer said. “We are proud to recognize the contributions and sacrifices of our Employees, while acknowledging Juneteenth as the holiday it should be.  New York’s hospitals provide the best health care in the world and we look forward to three more years of doing that work.”

Upon ratification of the deal, all 1199 SEIU Members at League institutions will receive a one-time $3,000 bonus payment in recognition of their work through the COVID-19 Pandemic.

All Retirees will receive a one-time bonus worth 3% of their pension benefit.

Existing Worker benefits, including health care coverage with no out-of-pocket expenses, will be preserved.

The agreement also designates Juneteenth as a new legal holiday - in addition to the existing holidays 1199 SEIU Members at League institutions already receive.

The League of Voluntary Hospitals and Homes of New York is an association, formed in 1968, of 90 non-profit medical centers, hospitals, nursing homes and their affiliated facilities in the Greater New York Metropolitan Area.  The League acts as the bargaining agent for its members in Labor Contracts and represents them primarily in the negotiations with 1199 SEIU United Healthcare Workers East.

1199 SEIU is the largest Health Care Union in the Nation, representing 450,000 Health Care Heroes in New York, Massachusetts, New Jersey, Maryland, the District of Columbia, and Florida.  The Union, whose mission is to fight for quality care and good jobs for all, represents Health Care Workers in hospitals, nursing homes, private homes, and clinics.

To Directly Access This Labor News Story, Go To: www.1199seiu.org/media-center/1199seiu-league-voluntary-hospitals-and-homes-new-york-reach-three-year-contract-agreement