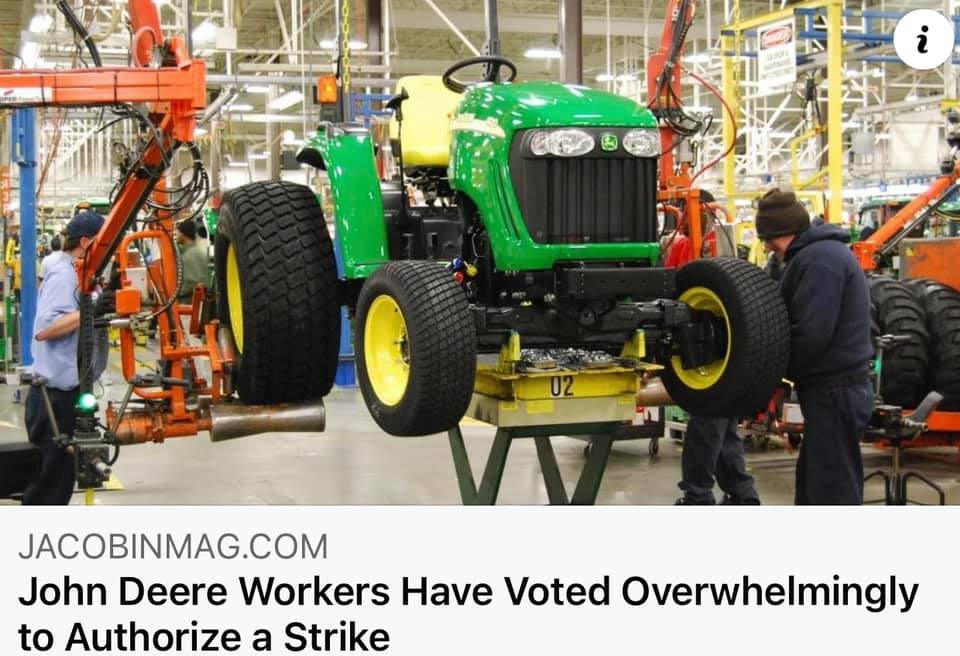 Earlier this month, Members of United Auto Workers (UAW) Locals across Iowa, Illinois and Kansas approved a Strike Authorization Vote by a 99% margin amid contract negotiations with the John Deere Manufacturing Company.

The current contract, which has been in place for six years, is set to expire at midnight, September 30th.

A strike, which will likely start in the first half of October if John Deere and UAW are not able to come to an agreement, would have major implications for the manufacturing company.

With harvest season around the corner, it would also impact the agriculture industry writ large.

This year shows record high demand for durable goods, a shortage in labor and a massive backlog in production, further complicating things for the leading agricultural equipment manufacturing company.

Negotiations are ongoing and it’s unclear whether the Strike will happen, but Workers are still preparing for a fight.

This potential Strike would also be coming on the heels of record profits for John Deere.

The company made more money in just the first nine months of this fiscal year than it did in the entirety of its record-breaking 2013 year.

While days still remain before the contract expires, some Workers in the Bargaining Unit have already taken action, picketing outside of John Deere Headquarters over issues like wages, higher co-pays, seniority provisions, and cuts to both short-term disability and health care.

The last time John Deere Workers went on strike was in 1986/1987, when more than 12,000 Workers walked off the job during contract negotiations over some of the same issues as today.

That Strike cost the company more than $100 million in their Quad Cities shops alone.

After a five-month Strike, the two sides came to an agreement that included a job security program that prevented more than 10% of UAW Workers from being laid off at any one time.

A decade after that Strike, the UAW gave a major concession allowing John Deere to implement a tiered workforce program where Employees hired after their 1997 contract agreement made less money than Workers already there.

Now, more than three decades since the last Strike, there is a renewed sense of militancy among John Deere Workers.

The current Members hope their efforts will not only secure immediate gains for themselves and their families but also lay the foundation for future good jobs.

To Continue Reading This Labor News Story, Go To: https://jacobinmag.com/2021/09/john-deere-workers-record-profits-uaw-contract-strike-authorization-vote