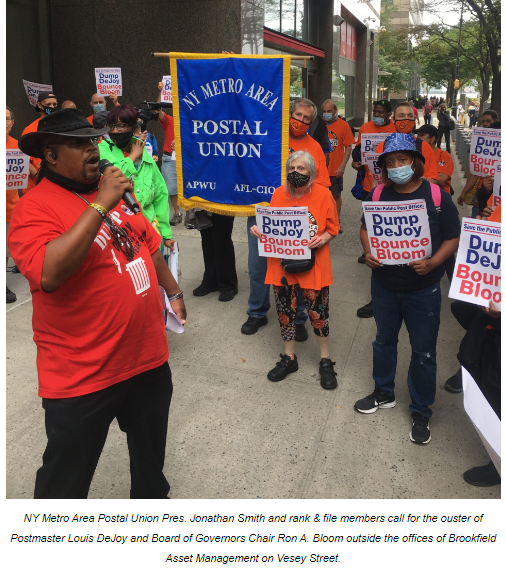 (NEW YORK CITY) - Members of the New York Metro Area Postal Union are calling on the Biden Administration and the rest of the American People to help save the nearly 250-year-old United States Postal Service (USPS) from the further machinations of Postmaster General Louis DeJoy and Postal Board of Governors Chair Ron A. Bloom.

“I think it has (been) clearly laid out that Ron A. Bloom and Louis DeJoy have a serious conflict of interest - they are not there for the betterment of the American people or the Postal Service,” New York Metro Postal Union President Jonathan Smith said.

In addition to charges that the Trump-era-appointees instituted policies to undermine last Fall’s Presidential Election and continue to slow down the mail in an ongoing effort to usher in privatization - Postal Workers with the New York Metro Area Postal Union say both DeJoy and Bloom have unacceptable conflicts of interests.

Bloom is actually the company’s vice chairman and managing partner, and has been since 2016.

“Ron Bloom is an easy fix - just do not reappoint him come (December 8th),” Smith said. “(But) he must go.  We must get a Board of Governors concerned about service to the American People.”

Bloom’s seven-year term as chair of the Postal Board of Governors actually ended in 2020.

He’s now in what is referred to as a “holdover year.”

Ousting Postmaster DeJoy, however, requires the nine-member Board of Directors, still in control of Republicans and Right-Wing Democrats, to take action.

“I know that DeJoy does have to go,” Diane Orlando, who serves as the New York Metro Area Postal Union’s Director of Organizing, told fellow demonstrators. “But we’ve got to get rid of this sucker (Bloom) first because he has to be the one that goes.  I know if he goes, we’re going to put those chess pieces in place (and oust DeJoy).  Believe that.”

Chuck Zlatkin, who serves as the Legislative and Political Director for the New York Metro Area Postal Union, says mail delivery standards need to be returned to 2012 levels.

That’s when he says service began to suffer as a result of systemic plant closings and dubious cost-saving measures.

Said Zlatkin: “This new administration under Louis DeJoy, and under the tutelage and protection of Ron A. Bloom, has basically said we don’t give a damn about getting the mail to people on time - that’s not what we’re about.  What we’re about is cutting back the service, opening up (the USPS) to our friends involved in other means of (private) delivery - and to hell with people who depend upon (the USPS).”

Virginia Congressman Gerry Connolly, who serves as Chair of the House Subcommittee in charge of postal issues, calls both DeJoy and Bloom “bandits” with conflicts of interests that “do nothing but harm the Postal Service and the American People.”

To Directly Access This Labor News Report, Go To: www.laborpress.org/dump-dejoy-bounce-bloom-ny-postal-workers-want-postmaster-board-of-governors-chair-out/