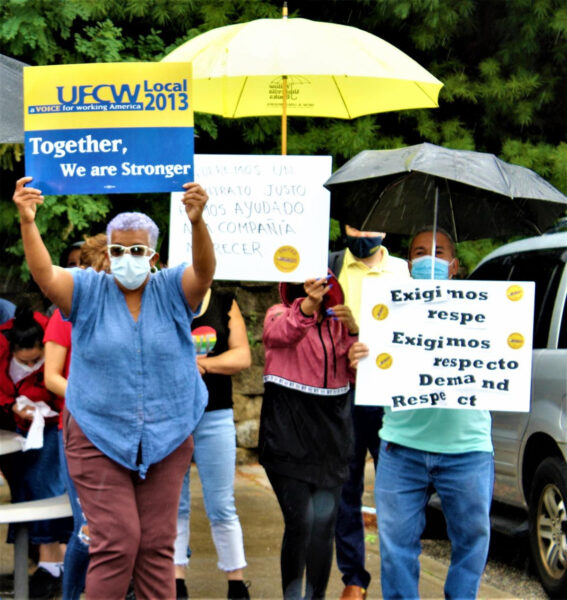 (BELLPORT, NEW YORK) – Late last week, Workers, elected officials and community residents called on Quality King, one of the Nation’s leading distributors of brand items, to negotiate a fair Labor Contract for one of its subsidiaries - and end what they call the “culture of harassment and intimidation of Immigrant Workers.”

During a press conference held in front of Quality King’s 35 Sawgrass Drive Headquarters, they denounced the company for regularly engaging in scare tactics, such as firing Workers after attending rallies.  They also said the company has not investigated reported instances of harassment and sexual harassment.

Local 2013 also condemned Quality King’s failure to bargain a fair contract with a living wage for its subsidiary Perfumania (one of the Nation’s leading distributors of designer perfumes).

“The Nussdorf Family (owners of Quality King) is one of the richest county and yet time-after-time, as we enter into contract negotiations, we have to show up at their headquarters demanding fair and humane treatment of the workforce they employ - the people they hire and then choose to treat like animals by forcing them to work at or near minimum wage while they pocket millions in profits and get millions in taxpayer assistance through tax breaks given to create good paying jobs,” UFCW Local 2013 President Louis Mark Carotenuto said in a statement.

“As elected officials we find this situation appalling and will not allow the exploitation of hard-working men and women in Suffolk County,” he said. “This is purely a case of corporate greed, where a company uses its wealth to take advantage of Blue Collar Workers.”

During the recent contract negotiations on behalf of Perfumania, Quality King hasn’t been willing to provide better wages and working conditions.

The company is offering a contract with zero raises for two years and no retro pay to the end of the previous contract, UFCW Officials said.

Assembly Member DeStefano, as well as Suffolk County Legislators Mazzerella, Caracappa, Robert Calarco, Sam Gonzalez, and Kevin J. McCaffrey, had previously sent a letter to the company in support of the Workers.

“We strongly urge you to negotiate a contract that offers a decent standard of living for the Workers, residents and taxpayers of Suffolk County,” the local legislators said in a joint letter. “Wages that hover at or near the Minimum Wage are not adequate for survival on Long Island and certainly do not advance the health, general prosperity and economic welfare of the people of this state.”

To Continue Reading This Labor News Report, Go To: https://www.laborpress.org/42181-2/