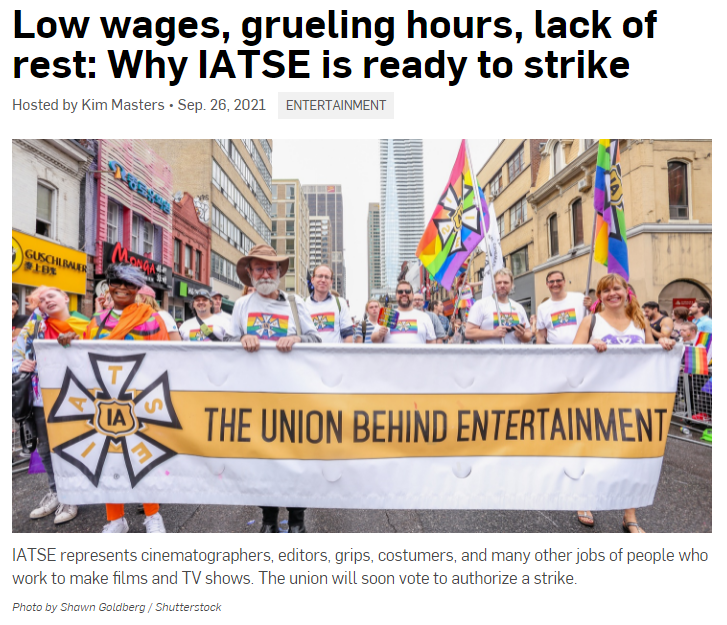 (LOS ANGELES, CALIFORNIA) - A number of Hollywood Unions and celebrities have taken to social media to show solidarity with the International Alliance of Theatrical Stage Employees (IATSE), which will vote on whether or not to Strike.

Talks between IATSE and the Alliance of Motion Picture and Television Producers (AMPTP) have broken down as Workers who support productions seek improvements on meal and rest periods, longer turnarounds between production days, and improved rates on streaming projects.

While Crew Members share their support for a possible Strike, Actors - including Mindy Kaling, Seth Rogen, Sarah Paulson and Screen Actors Guild-American Federation of Television and Radio Artists (SAG-AFTRA) President Fran Drescher, are among those who have all shared posts using the #IASolidarity.

Jane Fonda and Lily Tomlin (pictured below) posed in T-shirts showing their support for Strike action.  The tweet, shared by IATSE Local 600, said: “Icons, forever and always. @JaneFonda and @LilyTomlin stand alongside @IATSE in #IASolidarity. #IAVoteYes” 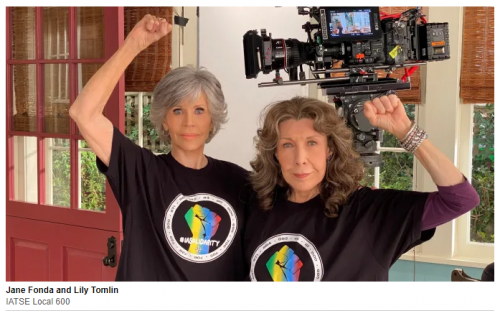 Oscar-winning Actress Anna Paquin shared a link to an on-line petition that urged her followers to sign the form in solidarity, writing: “Their lives depend on it.”

The petition called for AMPTP to “make a fair deal with IATSE Film and Television Workers by addressing grievous problems.”

So far, nearly 50,000 signatures have been collected.

Another Actress and Producer who shared her voice was Kerry Washington, who wrote: “There are so many talented humans who make the movies and TV shows we love!  You may not see them on screen but they are the magic makers and the glue that holds any set together.  I urge the #IATSE to hear them.  And I stand with my Brothers & Sisters in this Strike #IASolidarity.”

“On behalf of our hundreds of thousands of Members working across film and television, we stand in solidarity with our IATSE Brothers, Sisters and kin,” the Labor Leaders said in the statement. “The basic quality of life and living wage rights they’re fighting for in their negotiations are the issues that impact all of us who work on sets and productions.  We stand with IATSE.”

The 13 West Coast IATSE Locals - which represent most below-the-line Workers - are set to vote on a Strike Authorization starting on October 1st.

The results will be announced on October 4th.

The vote is seen as a way to give IATSE Negotiators more leverage at the bargaining table and does not mean a Strike is necessarily imminent.

But the Union, which tends to quietly ratify contract amendments every three years, is making a much more public and aggressive stand this time around.

If the vote is approved, IATSE International President Matthew D. Loeb would have the power to call a Strike, ordering 60,000 Workers off the job from coast to coast.

To Directly Access This Combination Of Labor News Reports In Their Entirety, Go To: https://variety.com/2021/artisans/news/celebrities-support-iatse-strike-vote-1235073810/