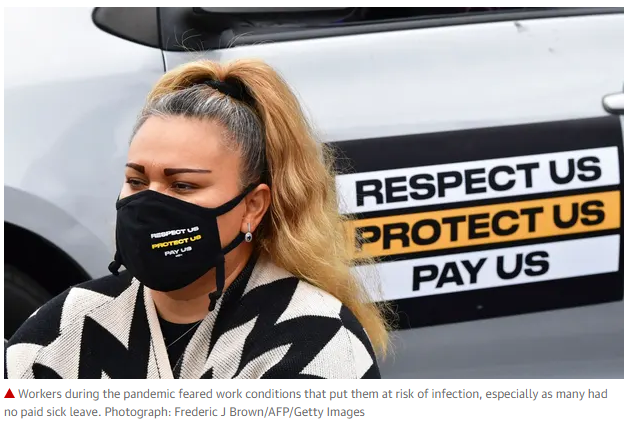 (WASHINGTON, D.C.) - Two-thirds of low wage Workers do not have sick days, despite the ongoing Coronavirus Pandemic, according to the Bureau of Labor Statistics (BLS).

Overall, Paid Sick Days have a positive benefit to employers as it reduces Employee turnover.

There has been a recent push by Democratic politicians and Workers in the U.S. to secure paid leave for low wage Workers.

Over three-quarters, or about 77%, of Private Sector Workers in the U.S. have the ability to earn paid sick time at work, but the benefit is mostly available to higher wage Workers, according to BLS data.

Only 33% of the lowest paid Workers are able to earn paid sick days in the U.S., the data found.

Low wage Workers, such as people working in education, restaurants and manufacturing, are typically working in positions where they have more direct contact with the public, putting them at a higher risk for developing a contagious disease like COVID-19, falling ill and subsequently being forced to miss work, the Economic Policy Institute (EPI) points out.

Depending on where Workers live can also impact their access to Paid Sick Days, the EPI reported.

For example, 95% of Private Sector Workers living in the Pacific Region (in the States of California, Oregon, and Washington) have access to Paid Sick Leave, while only 67% in East South Central States (Alabama, Mississippi, Kentucky, and Tennessee) have the same access.

Alabama, Mississippi, Kentucky and Tennessee all have pre-emption laws prohibiting cities and counties from requiring local employers to offer Paid Sick Leave or other forms of Paid Family or Medical Leave, according to the EPI.

There is no Federal Law requiring employers to provide Paid Sick Leave.

Recently, Tyson Foods, the world's second-largest processor and marketer of chicken, beef and pork, granted Workers who are fully vaccinated against the Coronavirus 20 hours of Paid Sick Leave a year to incentivize Employees to get the vaccine, the Business Insider reported.

However, Amazon - which currently employs every one out of 153 Workers in the U.S., does not offer its Warehouse Workers Paid Sick Leave.

Amazon has come under scrutiny from its Employees and Labor Activists for offering unsafe working conditions for its warehouse Workers and delivery Drivers.

House Democrats are currently drafting a Bill that includes 12 weeks of Paid Family and Medical Leave for American Workers.

The proposed $3.5 trillion Infrastructure Plan, called the Build Back Better Act, would guarantee Workers time off to raise newborn children or deal with a medical emergency, Business Insider reported.

"This is our historic opportunity to support Working Families and ensure our economy is stronger, more inclusive and more resilient for generations to come," Chairman Richard E. Neal, a Massachusetts representative, previously told Business Insider.

To Directly Access This Labor News Story In Its Entirety, Go To: www.businessinsider.com/two-thirds-of-low-wage-workers-dont-have-sick-days-2021-9