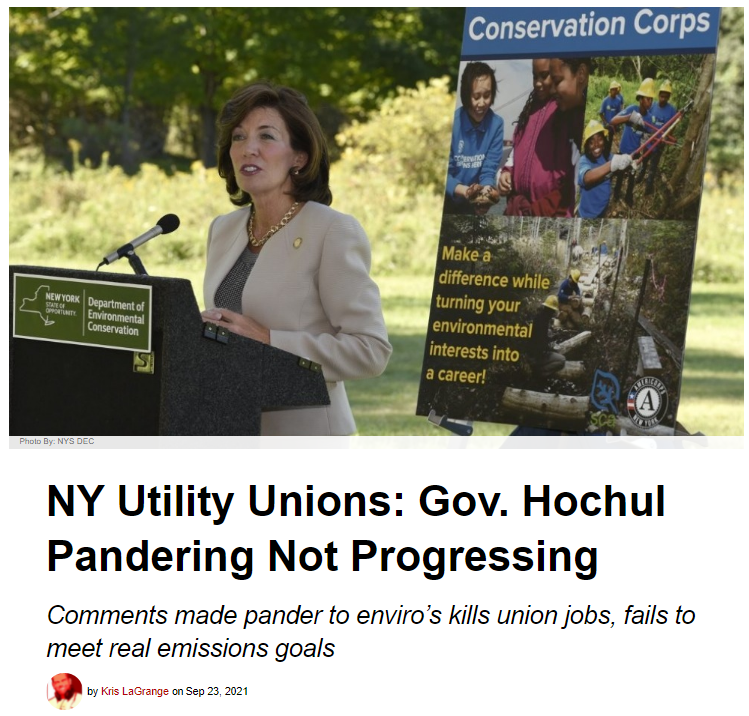 (ALBANY, NEW YORK) - New York State is dependent on energy supplies from out of state for more than three-fourths of its energy needs, according to the U.S. Energy Information Administration - which means 75% of the energy used by state residents comes from out-of-state providers.

“When we asked the (former Governor Andrew Cuomo Administration) exactly which states are providing energy, the amounts, and their source of energy - we received no response.  The Cuomo Administration took a victory lap when they closed coal plants along the Southern Tier - resulting in thousands of jobs lost, while the coal plants just over the Pennsylvania Border continued to thrive providing New York with ‘dirty’ power.  This demonstrates the hypocrisy of New York State's energy policy," Patrick Guidice said.

Guidice is Chair of the 15,000-member International Brotherhood of Electrical Workers (IBEW) Utility Labor Council of New York State, which is composed of Local Unions in the IBEW, whose Members work at utility companies throughout the state.

Guidice, who also serves as Business Manager of IBEW Local 1049, based on Long Island, says New York’s policy - as-is, has devastated communities like Somerset, Buchanan and Newburgh, which all witnessed the mass exodus of good paying jobs.

As Lt. Governor, Hochul’s relationships with Organized Labor were and continue to remain strong.  The Union Community from various sectors applauded her new role when she took over in early August 2021, but it didn't take long for criticism to emerge when Hochul recently announced at Climate Week in New York City that her administration was expanding solar generation in New York with the goal of creating 10 gigawatts of solar generation in the state by 2030.

According to Australian-based Sunwiz Industries, consultants who have been providing service and marketing advice to the solar community since 2005, “to create 10 gigawatts of solar power, close to 40 million solar panels need to be utilized.  If you laid them end to end, then you’d reach all the way around planet earth, twice over.”

These solar panels are typically not recyclable, because they contain toxic materials like lead that can leach out as they break down, landfilling them also creates new environmental hazards.

“As this administration moves forward with environmentalist driven energy policy; the men and women who keep the lights on ask that you move with caution. There are numerous examples of unintended consequences of good intentions,” James Shillitto said.

Shillitto is President of the 7,800-Member Utility Workers Union of America Local 1-2, based in New York City, whose Members work at Con Edison and power plants throughout the five boroughs and Westchester.

One recent example of good intentions gone bad: the Governor is suggesting building an extension cord from Canada to Queens, relying on foreign power and exporting jobs to Canada - while closing down power plants prematurely and laying off thousands of Workers  and the loss of good Middle Class jobs here in New York.

“These are examples of politically expedient energy policy which will leave us with the potential for drastic price hikes in energy and the likelihood of rolling blackouts, as well as the loss of dependable New York-based energy such as proposed as an alternative to the Canadian extension cord,” Shillitto added.

“We support the emission goals set by this administration and suggest that allowing New York-based investor-owned utilities to engage in renewable generation coupled with the dramatic reduction of ‘dirty power’ imported from surrounding states will produce greater, more substantial, ‘real’ results.  We all want to leave the planet in better shape for the next generation.  However, doing it fast typically does not translate into doing it right,” Guidice said.

The Utility Unions have reached out to the Governor's Staff and the administration appears receptive to listening to Workers concerns.

To Directly Access This Labor News Report, Go To: https://ucommblog.com/section/state-politics/ny-utility-unions-gov-hochul-pandering-not-progressing