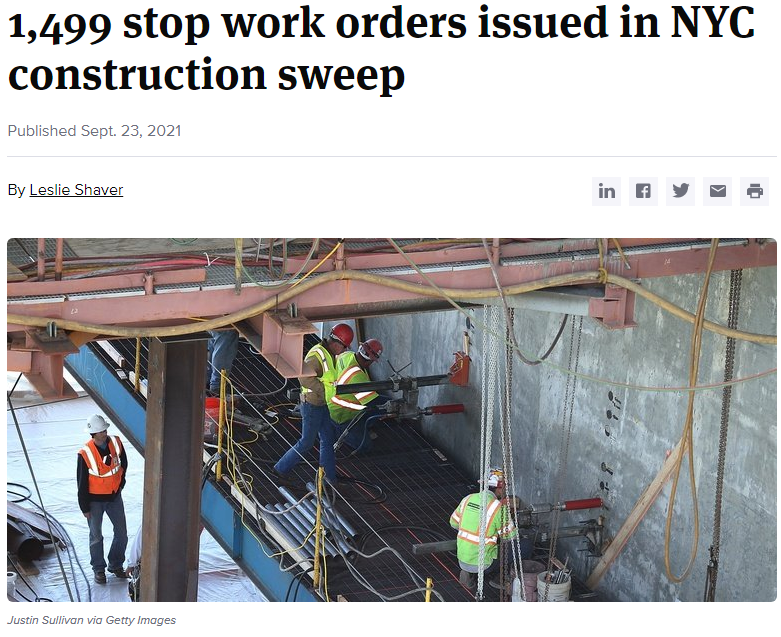 In some cases, those orders were issued to different permitted jobs located at the same address.

The DOB rescinded many of those orders and work resumed after the contractors corrected the unsafe condition.

The uptick in inspections was in response to seven construction-related deaths in New York City in the first half of 2021, including two fatalities from falls in May.

City Inspectors checked to ensure that Workers were using safety harnesses, controlled access zones, guardrails and other Fall Prevention Systems, according to Andrew Rudansky, Press Secretary for the DOB.

In addition, Inspectors were also determining whether sites complied with general safety plans.

COVID-19 Pandemic Health and Safety Protocols were not part of the sweep.

Falls on worksites are a national problem.

Out of 1,102 construction fatalities in 2019, 401 resulted from falls, according to the Bureau of Labor Statistics (BLS).

The problem is even more pronounced in New York City, where since 2015, construction falls have led to 37 fatalities and 1,029 injuries on construction sites.

New York DOB’s recent safety sweep attempted to create an environment where those falls are less likely to occur.

In addition to issuing Stop Work Orders in their recent sweep, DOB Inspectors handed out safety cards that reminded Workers to wear a safety harness properly, look out for slipping and tripping hazards and install guardrails or hole coverings in the proper situations.

The value of having a safety harness was illustrated in a recent incident in Arlington, Virginia.

A Worker in the Rosslyn neighborhood was rescued after he was dangling from scaffolding connected to his harness, according to local news website ARLnow.

While construction falls were the focus of the recent sweep in New York, City Inspectors uncovered other violations, including failure to have the required site safety personnel on location, kept construction plans on site and provide Workers with a pre-shift safety meeting.

They also discovered contractors with expired registration and insurance and construction work performed contrary to the approved plans.

The recent sweep is just one way DOB wants to increase safety at the city’s construction sites.

It has also increased penalties for the most serious safety violations, hired hundreds of additional Inspectors, implemented a first-of-its-kind safety training program for the city’s Construction Workforce and increased the frequency of unannounced construction safety inspections of large worksites across the city.

To Continue Reading This Labor News Report, Go To: www.constructiondive.com/news/1499-stop-work-orders-issued-in-nyc-construction-sweep/606946/?utm_source=Sailthru&utm_medium=email&utm_campaign=Issue%3A%202021-09-23%20Construction%20Dive%20Newsletter%20[issue%3A36901]&utm_term=Construction%20Dive&fbclid=IwAR1vy8ih4h10K8NLPqhbyqiVTO3SZHe44gOwfJ0IdQyDyyfZVCY6QZUltAk