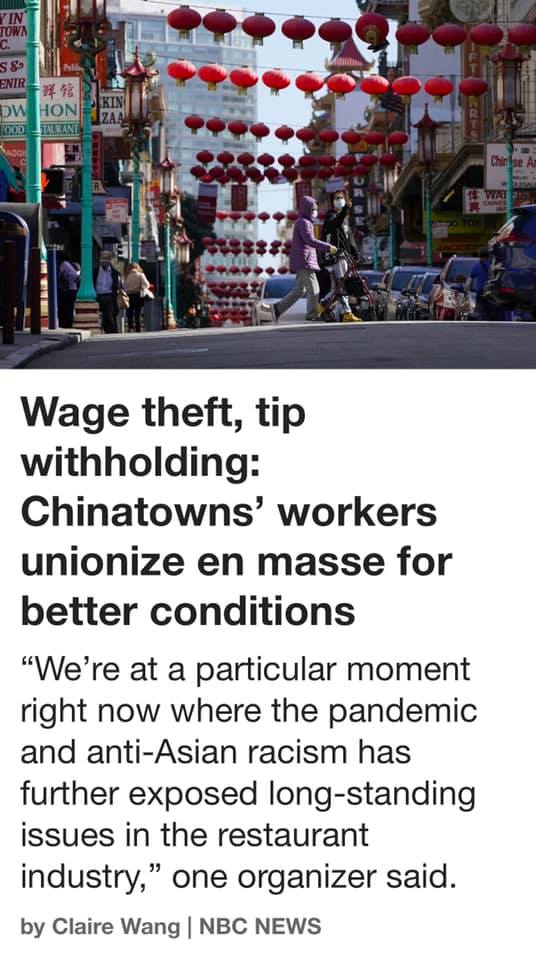 One of the few servers who spoke fluent English, Wang eventually learned of his rights in the workplace and decided to fight for them.

In 2018, he rallied a dozen fellow employees, all immigrants from China and Taiwan, and filed a claim with the state for lost wages, for alleged failure to pay minimum wage and sick leave.

“I wanted to make sure that everybody stuck together and knew what’s going on,” Wang, 56, told NBC Asian America. “Besides the money, we’re sending the message to other Immigrant Workers that you can stand up for yourselves.”

Over the course of the COVID-19 pandemic, Chinatowns in particular have become a hotbed of labor protests and legal challenges, many of which are concentrated in the hard-hit hospitality sector.

Nationally, 90% of small Asian-owned businesses lost revenue last year, a rate higher than for other racial groups, according to a March study from the New York Federal Reserve.

Last month, the owners of the Sichuanese restaurant agreed to pay 22 employees $1.61 million in a hefty wage theft settlement, including nearly $600,000 in tips that the workers say were withheld from them.

Five Worker Leaders, including Wang, reached a second settlement of $70,000 for the alleged retaliation they experienced for speaking out.

Wang, who got sick while organizing, said his bosses refused to rehire him after he recovered a few weeks later, inflicting severe emotional and financial stress on him and his wife.

“We’re at a particular moment right now where the pandemic and anti-Asian racism has further exposed long-standing issues in the restaurant industry and low-wage work industry,” said Shaw San Liu, Executive Director of the Chinese Progressive Association, a grassroots organization that worked closely with the workers at Z & Y Restaurant.

Wage theft has been long-standing issues in low-income immigrant enclaves, particularly in the restaurant industry.

From 2010 to 2012, the U.S. Department of Labor’s Wage and Hour Division conducted a compliance sweep of nearly 9,000 full-service restaurants and found that nearly 84% of them had violated Labor Standards, which included wage and tip violations.

Palyn Hung Mitchell, a Staff Attorney at the Asian Law Caucus who worked on the Z & Y settlement, said “low-wage, Immigrant Workers of Color” are more likely to experience exploitation “no matter the race of their boss.”

They’re less likely to know and defend their rights, she said, because of language barriers, a fear of deportation or retaliation and a single-minded focus on supplying “food and shelter for themselves and their families.”

To date, Labor Organizers say none of the Employees have received any money from the court judgement.

Sarah Anh, a Labor Organizer with the Flushing Workers Center, said the strength of Labor Movements in New York’s Chinatown can be attributed to the presence of a robust Restaurant Union and community organizations.

“I think (COVID-19) has been an eye-opener in a lot of ways,” she said. “We see the callousness from bosses who don’t really care about their Employees.  They’re just driven to make the most money possible.”

To Continue Reading This Labor News Story, Go To: www.nbcnews.com/news/asian-america/wage-theft-tip-withholding-chinatowns-workers-unionize-en-masse-better-rcna2040