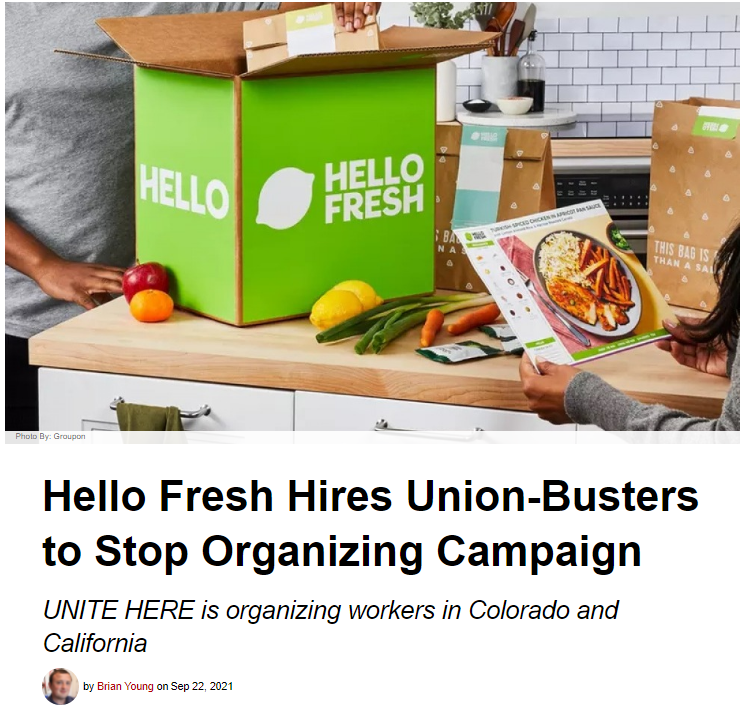 Over the last year Hello Fresh, a popular food delivery kit, sold 278 million meals to Americans and doubled its revenue to $2.4 billion.

But as wealthy Americans sat at home cooking their meals, Hello Fresh Workers were struggling with low wages and dangerous work.

These working conditions have led to 1,300 Hello Fresh workers deciding to hold a vote to join UNITE HERE.

The Workers - based in Aurora, Colorado, would be the company’s first Union Employees.

The Union also says another Organizing Drive is occurring in Richmond, California with Workers signing up in droves.

Hello Fresh, the largest in the booming meal-kit industry, is a German company that provides ready-to-cook meals and is often marketed towards White Collar Professionals who don’t have the time to go grocery shopping or to fully prepare a gourmet meal.

Yet, the Workers at Hello Fresh say many can’t even afford rent on the $15 an hour they’re paid.

"We want to break the cycle that so many of us at HelloFresh are under," Mary Williams, a 26-year-old Pack Line Worker at the Aurora site who earns $15 an hour, told Motherboard. "It's a cycle of low-paying work and having to work back-to-back jobs.  We believe that having a Union will really change things."

Williams says that she packs between 600 and 1,000 boxes a day and says that her assembly line is supposed to have seven people on it - yet, in recent months they have only had four on it due to staffing difficulties, but they are expected to meet the same output as seven people.

"Now that the economy is open and people are getting new jobs, we’re low-staffed," she said. "We have four people on the line doing double the work."

According to the Union, multiple Workers have said that they are homeless and can’t afford an apartment on their Hello Fresh wages.

Williams and her sister who also works for the company, said they had to give up their apartment and move back in with their parents because they can no longer afford rent.

Richmond California is located in the Bay area, which is one of the most expensive places to live in the country, while Aurora has an average rent of $1,563 a month, a 14% increase over last year.

"You’re drowning on these wages when you have a family.  I have four kids and I support three of them," said Michael Simon, a Heavy Lifter on a carrot-processing machine at the Richmond facility. "I sacrifice buying new clothes and I can't fill up my gas tank all the way.  It’s frustrating when you can’t take your kid to do simple stuff like go to Chuck E Cheese and Party City."

According to the workers, union-busters have already been brought in by the company and held mandatory captive audience meetings at both locations in recent days.