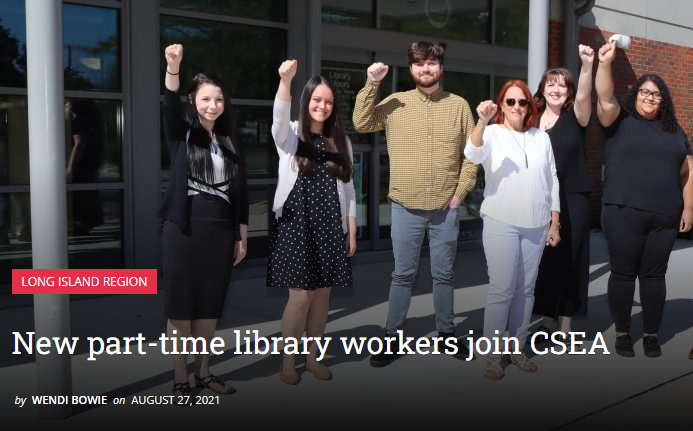 The newest CSEA Members were eager to Go Union because they are seeking parity with the full-time Longwood Library Workers that CSEA already represents.

“We (the part-time Workers) saw that the full-time Workers were receiving the benefits of a Union contract and had things like paid holidays and we want that, too,” Organizing Committee Member Deborah Scheurich said.

For years, Workers spoke on and off about issues at the library that they felt needed further attention, but somehow those conversations had never materialized into forming a Union - that is until Scheurich decided to take the initial step to contact CSEA about organizing a Part-Time Unit at the library.

Soon after, CSEA assigned an Organizer to the group and Scheurich began approaching other part-time Workers to join the Organizing Team.

Most Library Workers were excited to hear that their Unit was in the process of joining CSEA.

In fact, the Organizing Team was primarily greeted with a “Thank You” for their organizing efforts.

A few people appeared to be nervous to organize a Union, but there was generally no opposition.

In fact, most Workers were so ready to be CSEA Members that more than two-thirds of the part-time Library Workers filled out CSEA Authorization Cards in a week.

Shortly after, that number increased to nearly the full group.

The Organizing Team was strategic in the way that they approached potential Members.

Then they began to ask their Co-Workers to sign the cards based on that person’s initial interest.

During the process, the group kept each other motivated with a text chain, where they would congratulate each other for every card they got signed.

The Organizing Team plans on using surveys and word-of-mouth to establish issues Workers would like to see addressed at the bargaining table.

At the top of their list - establishing transparency for policies and procedures, as well as establishing pay scales for themselves.