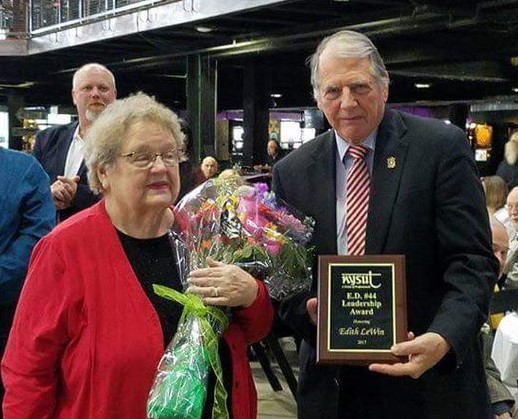 (BUFFALO, NEW YORK) – Edith ‘Edie’ LeWin, who served as Vice President/Presidential Assistant at the Buffalo Teachers Federation (BTF) for more than 35 years is being remembered as a “very caring person” who “would leave no stone unturned to help anyone.”

The long-time Union Leader and Advocate for Buffalo’s Public School Teachers, who retired in 2017, passed away over the weekend after battling an illness, BTF President Phil Rumore told WNYLaborToday.com today (Thursday, September 23rd).

“It’s a ‘big loss,’” an emotional Rumore (Pictured Above with LeWin/BTF Photo) told Your On-Line Labor Newspaper.  “She was ‘special’ - a ‘caring’ person ‘who cared about people.’  ‘She was always there for people and she would leave no stone unturned to help anyone, and that was among her greatest accomplishments.’”

Barbara Bielecki, a retired BTF Secretary-Treasurer who had known LeWin for the past 12 years, spoke fondly of her former Co-Worker and friend during an interview with WNYLaborToday.com: “She was a Home Economics Teacher who started out as a (BTF) Delegate and then served on the Executive Committee before she became a Vice President and Presidential Assistant - I believe she was with the BTF ‘longer than Phil (Rumore) has.’”

Rumore is currently serving his 21st consecutive two-year term as President of the BTF, which represents 3,800 Members in the Buffalo Public School System.  He was first elected in 1981.

“Political action was one of (LeWin’s) ‘passions and I cannot tell you about the countless number of Teachers she helped’ (over the years).  I’ve told those who are planning to come to her (funeral) service ‘that they will be blown away by the stories’ - ‘the number of jobs she saved by avoiding grievances, because she knew how to bring people together.’  ‘She always gave of her time and the legacy she leaves is never say it can’t be done - that there’s always a way, so let’s research it and find it,” continued Bielecki, who also served as a Presidential Assistant to Rumore.

“There’s ‘so much’ (BTF) history ‘that’s gone with her passing.’  ‘It was unbelievable the things she remembered, so much of it was in her head.’  ‘We begged her to write it all down.’  And, while she was a Home Economics Teacher, she ‘never’ cooked - ‘but always had a recipe to give to us,’ saying it was ‘perfect,’” Bielecki laughed.

The BTF passed the following resolution in honor of LeWin:

WHEREAS: Edith LeWin was a caring, tireless, advocate for Teachers for over 43 years; and

WHEREAS: Edie, as she was fondly called, advocated for and represented Teachers as the first Presidential Assistant working with Tom Pisa from 1974-1981; and

WHEREAS: Edie then continued to work with BTF President Phil Rumore from 1981-2017 when she retired; and,

WHEREAS: Edie further represented Teachers not only as BTF Vice President/Presidential Assistant but also oversaw and worked with all BTF Committees; and,

WHEREAS: Even in retirement, Edie was in communication with, advocating for and helping Teachers; and,

WHEREAS: Even in poor health, Edie wanted to know of the well-being of her colleagues; and,

WHEREAS: Edie will be loved and never be forgotten.

THEREFORE BE IT RESOLVED: That a copy of this resolution and a suitable remembrance be placed prominently in BTF Headquarters; and,

BE IT FURTHER RESOLVED: That a day be set aside where all Teachers will, in memory of Edie, wear items with the BTF insignia; and,

BE IT FURTHER RESOLVED: That all BTF Executive Committee and Council of Delegates meetings until January 2022, be adjourned in Edie LeWin’s honor; and,

BE IT FURTHER RESOLVED: That a framed copy of this resolution be presented to Edie’s family.
MOVED: Phil Rumore, BTF President

Services for LeWin will be held on Friday (September 24th) with visitation from 9 a.m. to 11 a.m. at the Carlton A. Ullrich Funeral Home, located at 8630 Transit Road in East Amherst.

A service will be held beginning at 11 a.m., with committal to follow at Elmlawn Cemetery, located at 3939 Delaware Avenue in Kenmore.