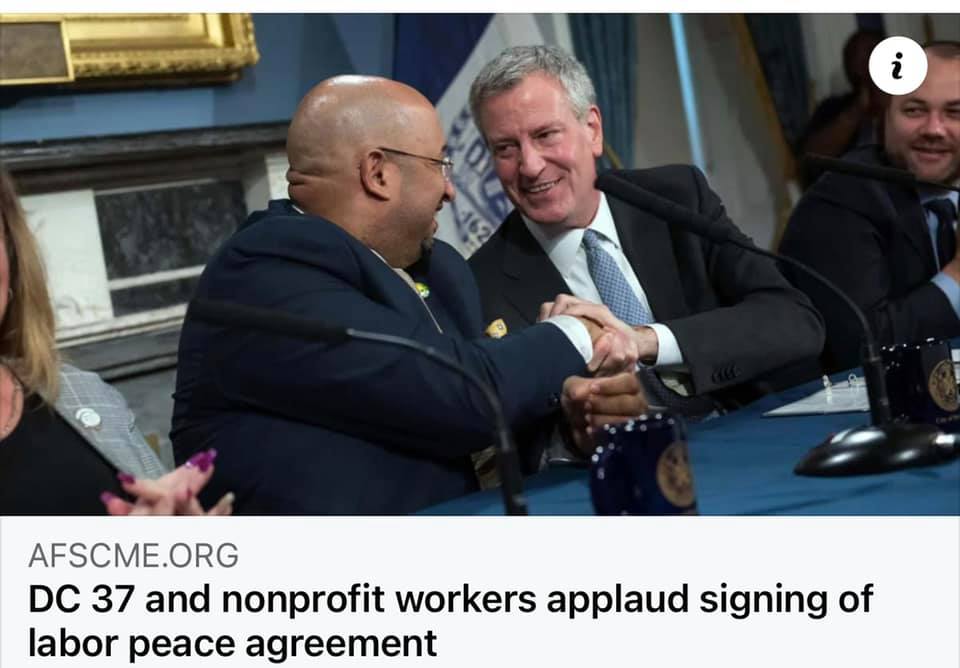 The Bill, which New York City Mayor Bill de Blasio signed into law, requires city human services contractors to enter into Labor Peace Agreements within 90 days of being awarded or renewing a city contract - affording the Workers the ability to organize without interference from their employers.

The new law represents a sea change in how Labor Unions can proceed in organizing and developing Collective Bargaining Agreements with Private Sector and Non-Profit Organizations under contract with the city.

“Labor peace is now the law of the land - and it’s been a long time coming,” DC 37 Executive Director Henry Garrido said. “Workers in the Non-Profit, Social and Human Services Sectors have been in crisis.  They face dangerous working conditions, rising health care costs, low pay and extremely high turnover.  They’ve been asking for the ability to organize without fear and it has finally been granted.  I want to thank Mayor de Blasio, Speaker Johnson and the entire City Council for standing up for these Workers and doing what’s right.”

DC 37 Members described how the new Labor Peace Agreement would allow them to better serve their communities and improve conditions on the job:

Nickey-Anna Lerice, a Teacher at a Head Start in Brooklyn: “With the passage of the Labor Peace Bill, Employees finally have protection to have their voices heard without retaliation from management.  Employees finally will be able to have a seat at the table to negotiate better pay, better health insurance, better retirement plans, better benefit plans and a better work environment.”

Natasha Pasternack, a Family Counseling and Case Analyst at Kings County Supreme Court, Civil Term: “I am thrilled at the passage of Labor Peace Legislation for Human Services Workers.  To borrow an adage: our working conditions are our clients’ healing conditions.  The greater the say we have at work, the better ‘the work’ is going to be.  This is a huge step toward a more equitable city.  Taking care of the New Yorkers who take care of New Yorkers is a Social Justice issue.”

To Directly Access This Labor News Report, Go To: www.afscme.org/blog/dc-37-and-nonprofit-workers-applaud-signing-of-labor-peace-agreement