Study Finds Cannabis Workers Of Color âEarn Up To 32% More, Highlighting An Opportunity To Advance Economic Justice With Unions In This Growing Industryâ 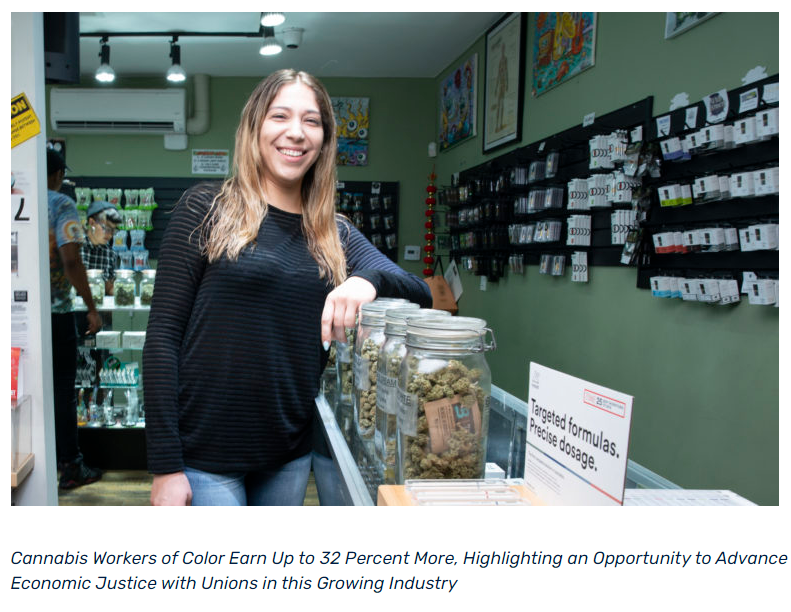 (WASHINGTON, D.C.) - The United Food and Commercial Workers (UFCW) is calling on Federal and State Legislators to build on the success of the cannabis industry in creating high quality, better paying jobs for hard-working Americans.

This led to increased job quality and pay standards for all Workers, particularly those of color, in addition to increased safety for customers and Workers.

Specifically, Unionized Cannabis Workers can earn up to $8,690 more than their Non-Union, non-cannabis peers.

This model provides a tangible opportunity to repair the harm done to Communities of Color during the war on drugs.

UFCW Legislative and Political Director & International Vice President Ademola Oyefeso said: “America’s Cannabis Workers proudly serve their communities every day.  They have earned and deserve the quality jobs the industry they helped build has created.  (This) report makes clear that high-quality cannabis jobs have made this industry good for hard-working families and has expanded economic opportunity to Communities of Color who were hurt by outdated state and Federal policies.  Labor Peace Agreements bring cannabis businesses and Unions together as partners.  They are a proven formula for success, increasing pay, providing benefits and protections for Workers in the industry.  As America’s largest Cannabis Workers Union, the UFCW urges all states, as they consider new cannabis policy, to include Worker standards.  Doing so will ensure that the thousands of hard-working people and families affect by failed policies benefit from legalization in the form of quality, sustainable jobs.”

Existing Unionized cannabis businesses in states with legal cannabis provide examples of how formalizing Workers’ Rights and participation in company decision-making has led to both business success and more remunerative jobs for those in the industry, the Union said.

As Congress considers the Cannabis Administration and Opportunity Act discussion draft introduced by Senate Majority Leader Chuck Schumer and Senators Cory Booker (New Jersey) and Ron Wyden (Oregon), the UFCW is urging lawmakers to recognize the importance of strengthening protections and the right to Unionize for all Workers in the fast-growing cannabis industry which already supports 321,000 American jobs nationwide.

Key findings from the EPI report on Cannabis Workers include: Labor Peace Agreements (LPAs) have proven successful in protecting Workers’ Rights to organize in the six states (California, Pennsylvania, New Jersey, New York, Illinois and Virginia) with statutes encouraging or requiring LPAs for licensed medical and/or recreational cannabis businesses. LPAs prevent Union-Busting by employers in exchange for Workers’ pledge not to Strike.

To Continue Reading This Labor News Report, Go To: www.ufcw.org/press-releases/new-report-cannabis-workers-unionizing-leads-to-higher-quality-jobs-and-increases-standards-in-fast-growing-industry/