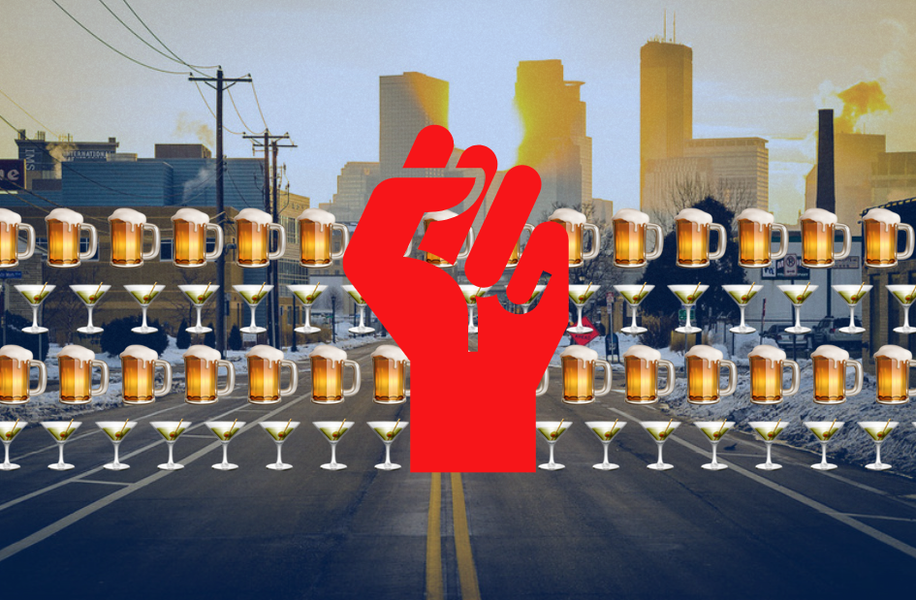 After working part-time making hand sanitizer in 2020 at Du Nord Social Spirits, a Minneapolis producer of small-batch liquors, they were hired full-time as a production lead this past February.

By mid-June, Kling and their five Co-Workers had gone public with their Union drive, and shortly thereafter, the company’s owners voluntarily recognized the Workers’ right to bargain collectively.

“I was just inspired by other Union drives,” they tell Fingers. “It showed me that it was possible.”

There’s been plenty of inspiration.

Over the past year and a half, the Twin Cities has emerged as the country’s most promising hotbed for Unionizing the craft beverage industry.

Pummeled by the Coronavirus Pandemic, Workers at distilleries, brewers and coffee shops throughout the metro launched Union drives at a clip never before seen in the fractured, vast, and tricky-to-organize hospitality sector.

Not all those drives were successful, but Minneapolis Craft Beverage Workers have won more drives than they’ve lost.

In the process, they’ve begun building city-wide solidarity within their industry, and a template for how Organizers and Workers in other cities can win Unions in breweries, distilleries and other craft food & beverage producers.

“There are going to be ups and downs, no doubt about it,” Anders Bloomquist, a Warehouse Specialist at Fair State Brewing Cooperative (which Unionized almost a year ago to the day) and a member of the Twin Cities’ Democratic Socialists of America Chapter.

“But I think all of the foundational pieces are available for us to construct something very good very robust and very powerful (that can be replicated around the country).  We have everything we need to win,” added Kling.

Here’s a look at how Craft Beverage Workers in the Twin Cities, with support from ambitious Organizers and Pro-Labor customers, are building a confident, cohesive and powerful movement to organize the boutique booze business in Minnesota - and beyond.

No matter the industry, organizing a Union in the United States is hard, tedious work these days.

And Unions themselves have been hobbled by declining Membership caused by Right-To-Work (for less) Laws, corruption scandals and good-old-fashioned Union-Busting.

Besides, the very concept of a stable full-time job has been steadily eroded to the point where exploitative labor models like “the Gig Economy” and “Polywork” seem almost normal if you don’t think about them too hard.

Craft culture - by which I mean the constellation of artisanal, high-end and niche food and drink, as so defined by Writer Lauren Michele Jackson in her 2017 essay - is not exempt from those forces.

And organizing comes with additional hurdles for Workers at the small craft beverage firms that produce the good beer, wine, and spirits you love.