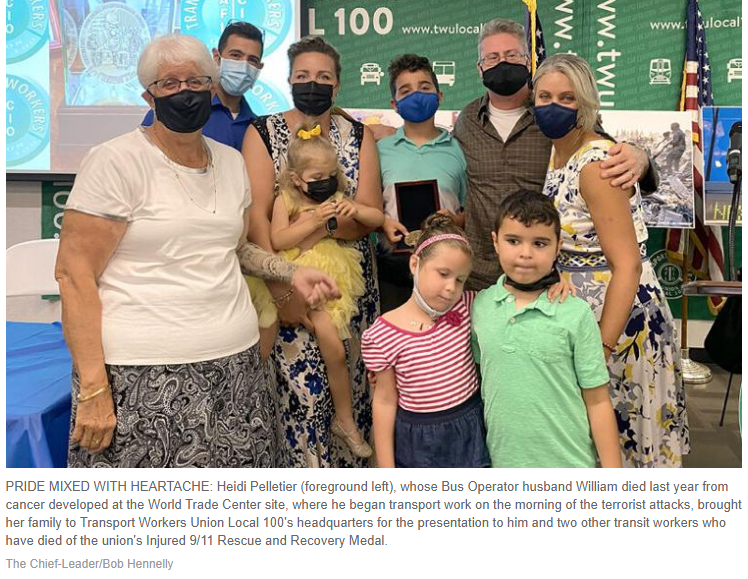 (NEW YORK CITY) - Transport Workers Union (TWU) Local 100 is vowing to double-down on its campaign to win what Union Leaders maintain is overdue recognition for the central role played by its Members in the 9/11 World Trade Center response and recovery efforts that have claimed the lives of at least 200 of its Members in the years since.

Since 2014, in hopes of raising their visibility in the 9/11 response, the Union has awarded its Injured 9/11 Rescue and Recovery Medal to Members who were part of the efforts at the Trade Center and suffer from health conditions stemming from their exposure to the toxic air that permeated Lower Manhattan.

“We don’t get the recognition we deserve and no matter what, as long as I am here and working for this Union, I promise you we are going to keep doing this until we get the proper recognition,” Local 100 President Tony Utano told the recently-held gathering.

Queens Congressman Gregory Meeks hailed the honorees who “with complete disregard for your own life decided you were going to try and save other human beings.”

Heidi Pelletier said the award meant a lot because her husband, who was a Local 100 Vice President, “loved this Union.”

“This was his whole life and 9/11 was a rough day for us.  At the time he was just a regular Bus Driver,” Pelletier said.

She recounted how her husband, working out of the Flatbush Depot in Brooklyn, was asked to take a busload of Firefighters to the Trade Center, arriving after the North Tower collapsed - but before the South Tower imploded.

“After he dropped the Firefighters off, somebody came and said they needed his bus to evacuate a whole day school and he told me that when he saw all those kids, all he wanted to do was get them out of there,” Pelletier said.

In the days that followed, he, like so many other Bus Operators, spent their tours moving Workers and family members to and from the smoldering scene.

Early on, Pelletier said her husband was stopped by a Police Officer who volunteered to give him a mask.

“I am giving you my last one,” she said the Officer told her husband. “I always wanted to say thank you to that Cop because we thought he had saved Bill’s life because he never had any lung problems.”

Pelletier retired in 2008 but in November 2019 was diagnosed with aggressive prostate cancer, linked to his exposure to the toxic air.

Bus Operator Tommy McNally, a past Medal Recipient, is a WTC prostate-cancer survivor who also moved responders on and off the site.

“You want to be recognized, remembered and appreciated,” he said in an interview after the ceremony. “It was surreal - at one point I was the only vehicle on the BQE and I said, ‘I am never going to see this again.’”

To Continue Reading This Labor News Report, Go To: https://thechiefleader.com/news/open_articles/twu-honors-its-post-9-11-dead-and-others-who-labored-at-wtc-free-story/article_d61bc1a4-17f2-11ec-bfec-9ffca2255fff.html