'Build Back Better' Would Create Four Million Jobs & Now, It's Up To Congress, This Week âIn The War On Workersâ 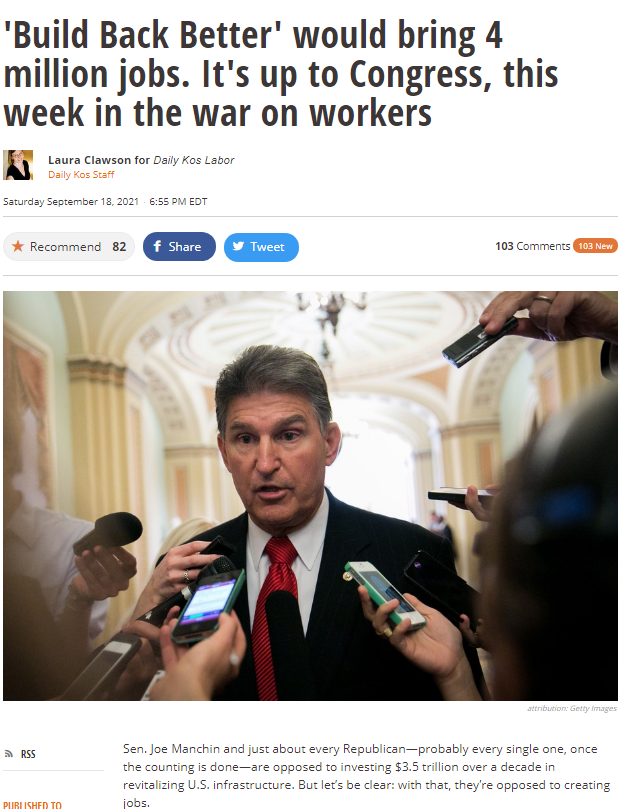 (WASHINGTON, D.C.) – U.S. Senator Joe Manchin (Democrat-West Virginia) - and just about every Republican, probably every single one, once the counting is done - are opposed to investing $3.5 trillion over a decade in revitalizing U.S. infrastructure, but let’s be clear, with that, they’re opposed to creating jobs.

Here’s the Economic Policy Institute’s (EPI) analysis of the jobs impact: “Combined, the (Infrastructure Investment and Jobs Act) and budget reconciliation package would provide fiscal support for more than four million jobs per year, on average, over the course of the ten-year budgeting window, through direct spending and increased indirect demand in related industries.”

And, the reconciliation package’s investments in caregiving would mean 1.1 million jobs.

Also, investments in fighting climate change and protecting the environment would mean 763,000 jobs.

So tell us again, Joe, how slashing the plan to ribbons is being fiscally responsible.

To Directly Access This Labor News Story, Go To: www.dailykos.com/stories/2021/9/18/2051174/--Build-Back-Better-would-bring-4-million-jobs-It-s-up-to-Congress-this-week-in-the-war-on-workers#read-more