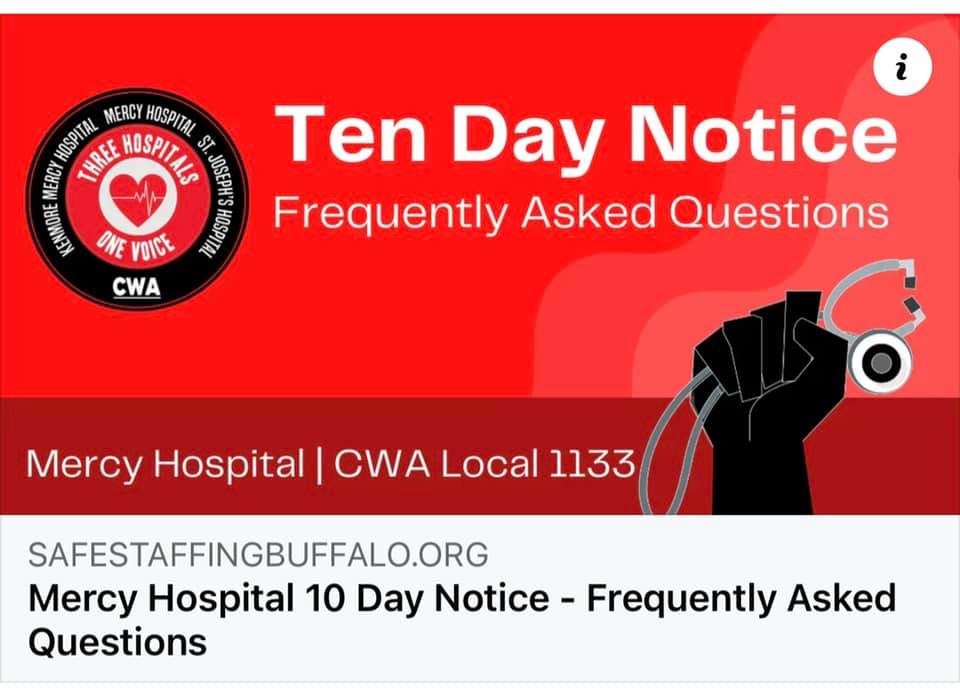 (BUFFALO, NEW YORK) – Union-represented Nurses, Technologists, Clerical Staff and other Service Workers employed at Catholic Health System’s Mercy Hospital in South Buffalo announced Monday evening (September 20th) that they will go on Strike on October 1st - if, a contract settlement is not reached by then.

The Workers - represented by the Communications Workers of America (CWA) - are taking action to stand up for patients in Buffalo because Catholic Health is refusing to settle a fair contract that will allow the hospital system to attract and retain the Workers needed to provide care to the community.

“We are going on Strike for our patients and for our community,” said Tina Knop, a Critical Care Registered Nurse (RN) at Mercy Hospital. “We’ve risked our lives over the last eighteen months providing care to Buffalo during the (Coronavirus) Pandemic, and despite a terrible staffing crisis, shortages of supplies and a hospital management that won’t listen to our concerns, we continue to do everything we can every day to provide the best possible patient care, but Catholic Health is ignoring our sacrifices.”

CWA represents more than 2,500 Workers who are employed at Catholic Health’s Mercy Hospital of Buffalo, Kenmore Mercy Hospital and Sisters of Charity Hospital-St. Joseph’s Campus, who have been raising concerns about staffing issues for months.

Earlier this month, Workers in the Nursing, Cleaning and Dietary Departments at Catholic Health’s Mercy Hospital of Buffalo voted overwhelmingly with 97% support to authorize a Strike.

As COVID-19 cases rise in Erie County, a new survey of more than 500 Registered Nurses (RNs), Technical, Service and Clerical Staff employed by Catholic Health’s Kenmore Mercy, Mercy and St. Joseph's Hospitals has revealed how dire the conditions at Catholic Health Hospitals have become and nearly universal concerns over understaffing, threats to patient care, supply shortages, high turnover and low pay: 70% of respondents say they have seen patients be neglected or suffer needlessly because of staffing shortages; Only 10% say patients are receiving the quality care they need; 98% say their hospital is struggling to retain Staff and the vast majority cite concerns over care quality, staffing shortages, low pay, poor working conditions and Catholic Health’s refusal to settle a fair contract as the reasons for turnover.

Additional findings include: More than half of respondents say they have been forced to do work they were not trained for due to understaffing; Over 90% say Catholic Health has failed to take adequate measures to solve understaffing; Over 70% reported that their hospital lacked the equipment and supplies they needed to adequately perform their roles: Respondents listed Personal Protection Equipment (PPE), vials, cleaning supplies, blood pressure cuffs, bath blankets and more as being consistently low in supply; and Survey respondents also shared harrowing accounts of patients sitting soiled for hours, falling trying to get to the restroom themselves, not getting fed in a timely manner and waiting hours for medication.

The CWA says the Buffalo community has expressed a great deal of support for Catholic Health Workers and that a number of state and local elected officials have publicly called for Catholic Health to “come to the bargaining table in good faith so these selfless, Essential Workers have the resources they need to deliver the highest standard of care."

More than 1,600 people have signed a petition asking Catholic Health to settle a fair contract with the Workers and undergo efforts to attract and retain more Staff.

And last week, 25 elected officials from the Buffalo region sent a letter to Catholic Health CEO Mark Sullivan, telling him: “No one in management appears to grasp the magnitude of the crisis workers are experiencing,” and that the “concessions being proposed by management are completely unacceptable to the heroes who got us through last year.  We urgently request a meeting with you to discuss this situation and urge you to adopt a new, more conciliatory, and concerned stance with regard to the Workers who keep your institutions working every day."

But rather than working to address understaffing at its hospitals, the CWA says Catholic Health seeks a contract that, between a massive increase in out of pocket health care costs and the impact of inflation, would translate into major pay cuts for Workers over the life of the agreement, a move that will make it even harder to attract and retain the Nursing and Care Staff the Buffalo community needs.

Meanwhile, the Union says Mark Sullivan brings home $1 million in salary, and the top 11 administrators made more than $7 million - combined, in 2019.