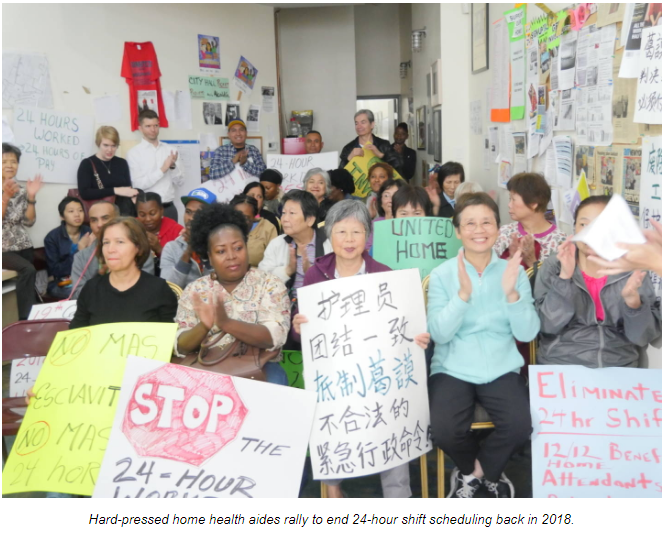 (NEW YORK CITY) - With a 2019 decision by the state Court of Appeals giving Home Health Aides the right to claim full pay for some 24-hour shifts, several home-care agencies have agreed to settle class-action suits for alleged Minimum Wage violations.

The Incare Home Health Care Group, Emanuel and Renaissance agencies have agreed to give their Attendants 5½ hours in back pay for each 24-hour shift they worked in a five-year period between 2013 and 2018.

More than 50 similar suits have been filed in the state, says LaDonna Lusher, a lawyer representing the Incare Workers.

While the Court of Appeals decision sustained the state regulation that agencies only have to pay Health Aides for 13 hours of a 24-hour shift - they’re supposed to be off for the other 11 hours, eating or resting - it said they could claim full pay if they could prove they hadn’t gotten time to eat or to sleep for at least five uninterrupted hours.

The city’s largest home care providers, however, have not agreed to settle, says Lusher.

They include Edison Home Health Care, First Chinese Presbyterian’s program and the Chinese-American Planning Council, whose program, licensed in 1998, serves about 3,000 people and has more than 4,000 Employees.

“They owe us a lot of wages,” said Qunxiang Ling, 75, one of about a dozen Health Attendants who protested outside the CPC’s Chinatown offices last week.

Speaking in Chinese through a translator, she said she recently retired after more than 10 years of doing three or four 24-hour shifts each week.

“I couldn’t continue,” she said, pointing to her back.

On overnight shifts, the Attendants have to turn the person they’re taking care of over every two hours, as well as feeding them and helping them to the bathroom, said Zhu Qin Chen, 66, also in Chinese.

She’s worked four 24-hour shifts a week for the past nine years.

“They don’t even sleep sometimes,” she continued. “They sit up and watch TV.  Then we have to stay up with them.”

CPC doesn’t pay Aides for that extra work, she said.

The Workers are demanding CPC stop the 24-hour workdays, “pay back all stolen wages of twenty-four-hour workdays,” and apologize to the Home Attendants who worked those shifts, said the National Mobilization Against Sweatshops’ Ain’t I A Woman Campaign, which organized the protest.

By those figures, paying Attendants $17 an hour for the now-unpaid 11 hours would cost the state about $750 million a year.

If CPC settled back-pay claims on the same $66-a-shift terms as Incare, it would be owe about $6.5 million.

CPC and other Unionized Home Care Agencies are now “in an arbitration process facilitated by 1199 SEIU” to address the back-pay issue, Ho said.

Representatives from 1199 SEIU (Service Employees International Union) was not immediately available for comment.

To Read This Labor News Report In Its Entirety, Go To: www.laborpress.org/some-home-care-agencies-settle-back-pay-claims-others-resist/