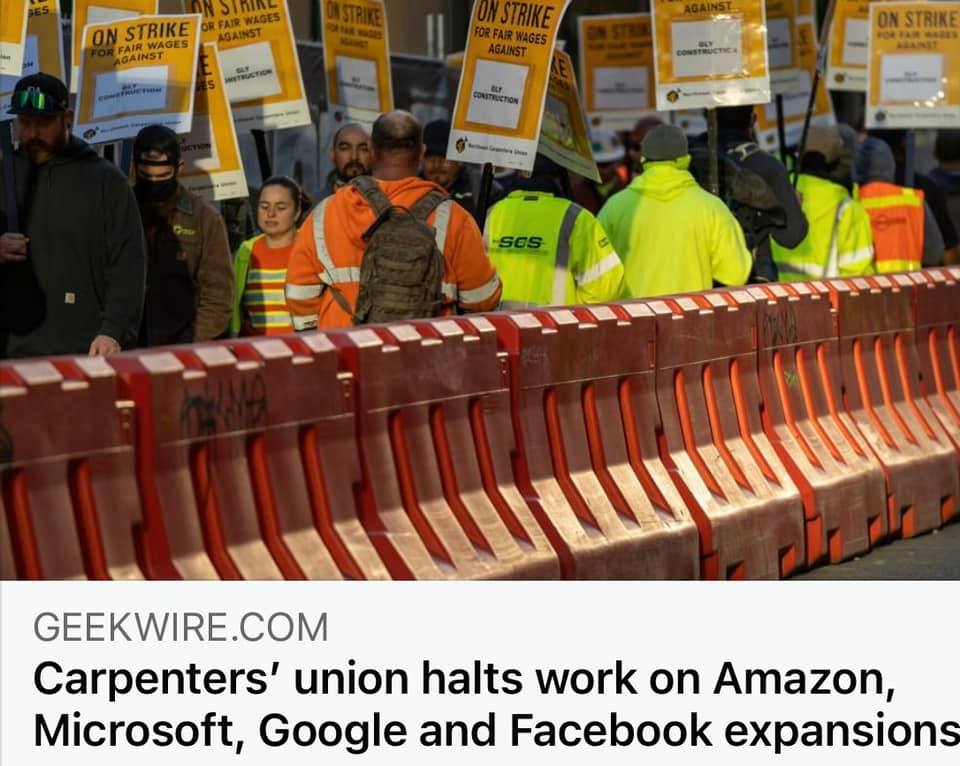 (SEATTLE, WASHINGTON) - Construction work on several major tech company expansion projects - including those by Amazon, Microsoft, Google and Facebook, have slowed to a crawl as the region largest Carpenters’ Union halted work over a wage dispute.

On Thursday (September 16th), 2,000 Northwest Carpenter Union Members walked off the job and began picketing at four major job sites, including Microsoft expansions in Redmond and Sammamish, Google and Amazon projects in Bellevue Plaza, and Facebook’s Building X in Redmond.

In the push for better wages and benefits, the Union looked at companies “that are making billions,” she said.

Specifically, the Union is striking against the Contractor Consortium - the Associated General Contractors (AGC), and not the tech companies themselves.

Like the Unions, the AGC negotiates the agreed-upon wages for the Trades at Union constructions sites throughout the area.

The Union is seeking a 20.4% wage-and-benefit increase over the next four years, along with larger employer contributions to health care, parking and pension, and stronger harassment and discrimination protections, among other items.

“It’s enormously expensive for our Union Members to work in Bellevue and Seattle,” Shapiro said, adding that simply paying for parking near job sites can set an Employee back $50 every day. “Our Members carry heavy tools from site-to-site.  We can’t just hop on mass transit.”

The Strike likely will bring many of the large projects to a standstill as other Labor Unions often choose to not cross a picket line when one of the on-site Trade Unions Strike.

To Directly Access This Labor News Story In Its Entirety, Go To: www.geekwire.com/2021/carpenters-union-halts-work-amazon-microsoft-google-facebook-expansions-seattle-area/

And For More, Read 2,000 Washington Carpenters Are On Strike At www.jacobinmag.com/2021/09/washington-state-carpenters-union-strike-picket-association-of-general-contractors-agc

And, Seattle-Area Carpenter Strike Begins; Hundreds Of Job Sites Could Be Affected At www.seattletimes.com/business/real-estate/seattle-area-carpenter-strike-begins-hundreds-of-job-sites-could-be-affected/