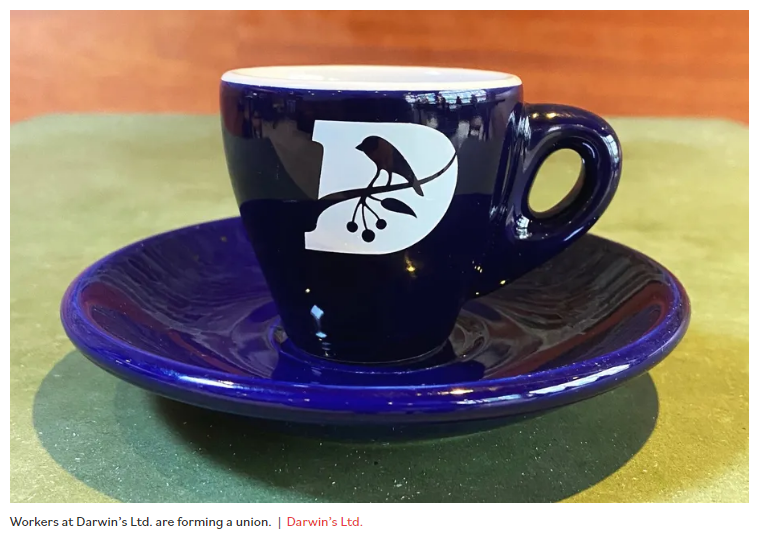 (CAMBRIDGE, MASSACHUSETTS) - Workers at Darwin’s Ltd., a Cambridge cafe with four locations, are forming a Union.

Late last week, the Darwin’s United Organizing Committee sent a letter to management informing them of their intent to form a Union.

In the letter, the Organizing Committee requested that management voluntarily recognize the Union through a Card Check procedure and participate in good-faith contract negotiations.

A majority of Darwin’s roughly 40 Workers have already signed Union Cards, signaling their support for the organizing effort.

“A partnership among us will strengthen the business while better supporting the Staff - for it is through collaboration, not proclamation, that we excel,” stated the letter.

The Organizing Committee also wrote that the cafe’s stated image of itself - one of community and consciously sourced goods, according to the letter - should “align itself with the action of supporting the foundation of the business: the Workers.”

Steven Darwin, the cafe’s owner, tells Eater “Darwin’s values the many contributions of its Employees.  We respect their right to consider Union representation.  We look forward to engaging with all of our Employees on this topic.”

Darwin did not indicate if management plans to voluntarily recognize the Union.

Annina Kennedy-Yoon, who works as a Darwin’s Barista and is part of the Organizing Committee, tells Eater the Workers at Darwin’s decided to Unionize because they recognize that they have the right to bargain for better working conditions.

“The best working relationships are the ones where workers have a say in how things are run. We don’t have any specific demands, we just want an equal say and to feel included in our relationships with our employers,” she said.

Kennedy-Yoon expressed a number of frustrations with the industry, especially with how Workers have been treated by the general public throughout the Coronavirus Pandemic.

“It’s been startling to see how some people don’t treat Service Workers with respect or as humans at all,” she says. “I got into a bad place where I felt as though the people I was serving didn’t respect my labor.  I was coming in every day, making food, making coffee, so they could live a normal life, or close to it.”

Eleanor McCartney, who works as a Shift Manager at Darwin’s and is a Member of the Organizing Committee, says that the pandemic was a contributing factor in deciding to Unionize.

“A lot of issues in the industry were exposed, and exacerbated, by the pandemic,” she says. “This work has been made harder, more frustrating and more exhausting by COVID.  We’re looking to stand together and have the ability to go to work and not feel burned out by a single day or when we have to go to work for five consecutive days.”

Members of the Darwin’s Organizing Committee, which is represented by the New England Joint Board Unite Here Union, tell Eater they found inspiration in the recent and  successful organizing effort at Pavement Coffeehouse in Boston and the ongoing Union organizing efforts at Starbucks in Buffalo.