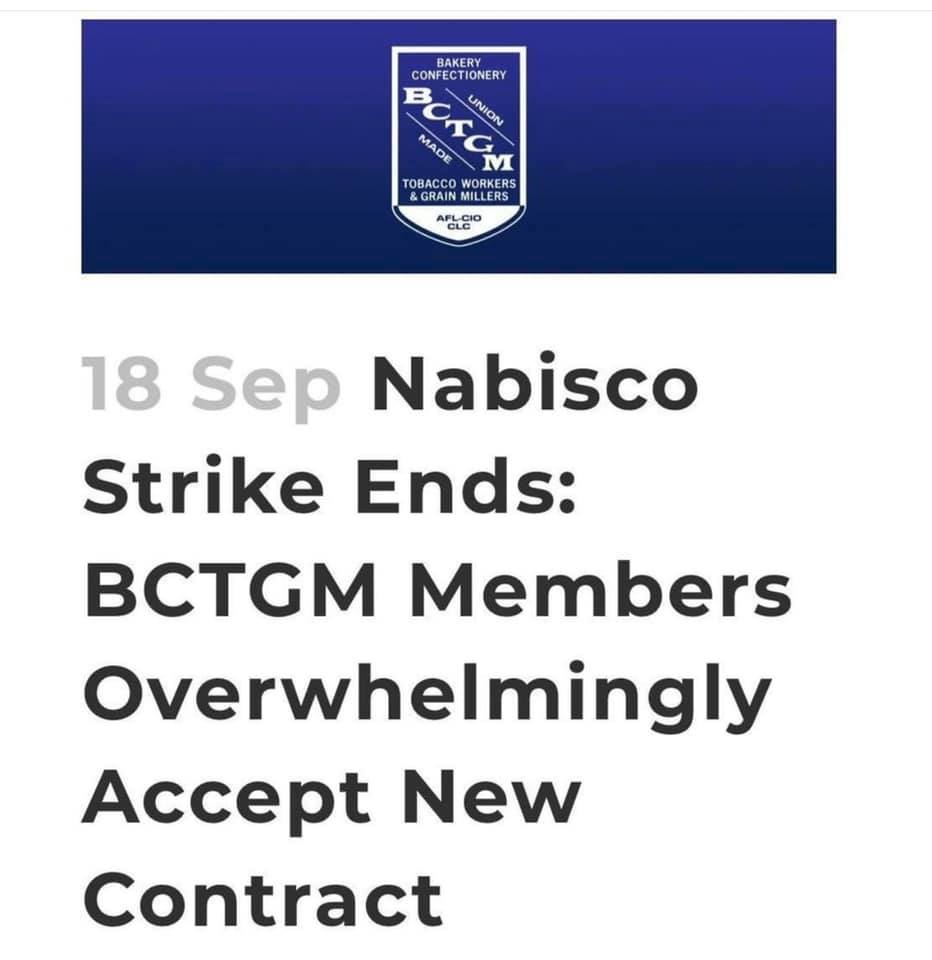 Approval of the contract ends the BCTGM’s Strike against Nabisco that began on August 10th (2021).

The Union has said the Strike involved about 1,000 Workers in the U.S.

The Strike started in Portland, Oregon and spread within days to the Chicago area, a bakery in Richmond, Virginia, and distribution locations in Colorado and Georgia.

Neither the company nor the Union has publicly discussed terms in the new contract.

“This has been a long and difficult fight for our striking Members, their families and our Union.

Throughout the Strike, our Members displayed tremendous courage, grit and determination.

BCTGM Members made enormous sacrifices in order to achieve a quality contract that preserves our Union’s high standards for wages, hours and benefits for current and future Nabisco Workers.

Their sacrifice will benefit all BCTGM Members and Working People around the country for years to come.

Those Brothers and Sisters who walked the picket lines day in and day out are true BCTGM Heroes.

The BCTGM is grateful for the outpouring of fraternal support and Solidarity we received from across the Labor Movement in the U.S. and around the world.

We offer our deepest gratitude to National AFL-CIO President Liz Shuler for directing the full resources and power of the National AFL-CIO at the Federal, state and local levels in support of our striking Members and our Union.

This support was critical to the success of the Strike.

The BCTGM has shown, once again, that this Union will do whatever it takes, make any sacrifice, take on any employer or adversary in order to preserve the rights and jobs of our Members and the standard of living of BCTGM families.”

To Directly Access This Labor News Story, Go To: https://bctgm.org/2021/09/18/nabisco-strike-ends-bctgm-members-overwhelmingly-accept-new-contract/

And For More, Read: