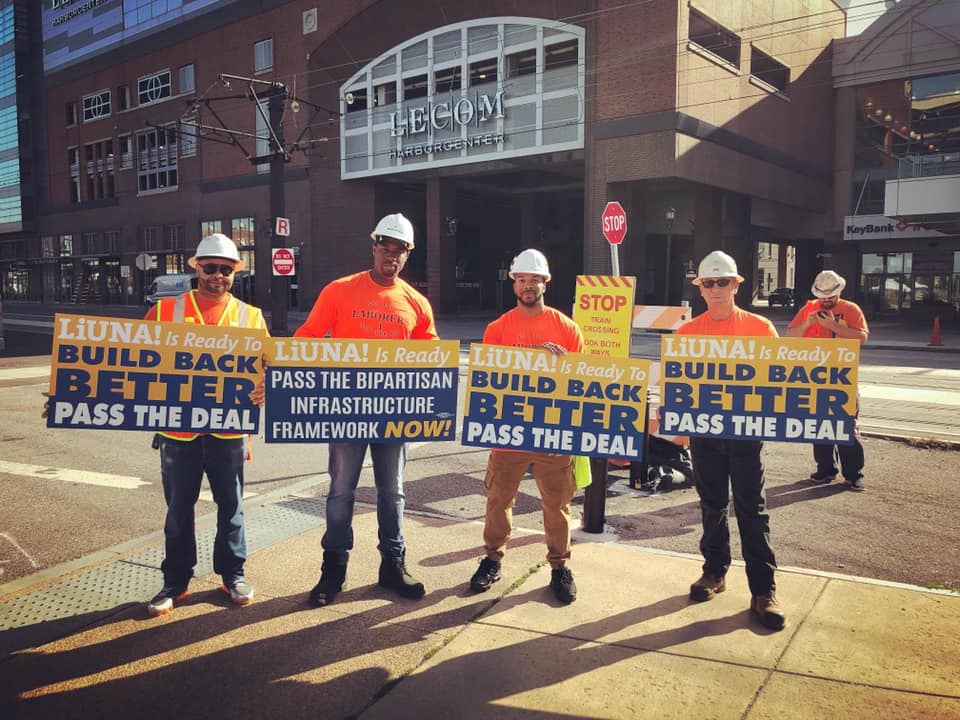 Capitano was one of several local construction industry speakers who joined with U.S. Congressman (New York-26th District) and New York State Senator Tim Kennedy during a Downtown rally that was held on Friday (September 17th) to emphasize that the time is now to rebuild America and to put the pressure on lawmakers in Washington to push through President Joe Biden’s Build Back Better plan. 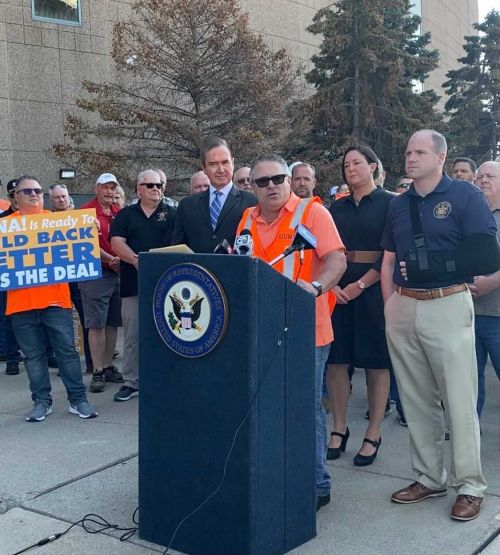 “The bipartisan infrastructure framework has the power to make New York safer, cleaner and employed in solid, family-sustaining jobs for generations to come,” said Capitano (Pictured Above/Photo Courtesy of Congressman Higgins’ Office). “This legislation isn’t simply an investment in our country’s infrastructure - it’s an investment in our country’s future, and the Laborers are ready to play a pivotal role in building back better, stronger and more connected than ever before.  We’re thankful for Congressman Higgins’ support of the bipartisan infrastructure framework and ask the rest of Congress to do the same - it’s the right thing to do not only for all New Yorkers, but the men and women in construction across the Nation.” 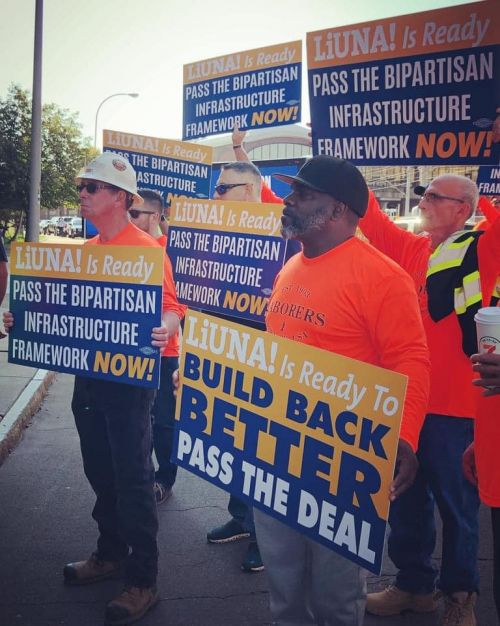 “We’re all in favor of the Infrastructure Bill and we’re pushing Congress to get it through,” IUOE Local 17 Business Manager Gary Swain told WNYLaborToday.com after the rally. “We need to get it passed because the last four years (during the Republican Trump Administration) nothing got done (on a Federal Infrastructure Program).  And what fuels the economy better?  Construction works to create good-paying jobs.”

Congressman Higgins and local Workers stressed Congress should go big on infrastructure investment, detailing how some of the current proposals for a five-year Federal Infrastructure Bill could help the region recover and support quality jobs in Western New York.

Buffalo’s State Senator Kennedy, the Chair of New York State’s Senate Transportation Committee, said: "Our state and our country have a once-in-a-generation opportunity to make a massive investment in our infrastructure and to change the lives of millions of residents for the better.  This year in New York, we secured monumental victories, including delivering historic road funding for the City of Buffalo, investing in strengthening local water infrastructure, and shaping a new Green Economy.  It's imperative that we continue to think big in order to advance generational projects that leaders like Congressman Higgins have been championing.  We need the Congressman’s colleagues in Washington to also think big and to pass President Biden’s Build Back Better agenda so that we can truly Build Back New York."

This is why infrastructure investments are critical for Western New York, those who spoke at the rally detailed:

Roads & Bridges: More than 1,700 bridges in New York and nearly 7,300 miles of highway in the state are in poor condition.  According to the American Road & Transportation Builders Association, in Congressman Higgins’ District alone there are 104 bridges categorized by the Federal Highway Administration as structurally deficient, carrying 881,570 vehicles daily.  The bipartisan framework provides $110 billion for roads and bridges.  New York would receive $11.6 billion in Federal Highway Aid and $1.9 billion for bridge replacement through formula funding over the next five years.  Communities would also be eligible to apply for additional infrastructure funding through competitive grant programs, including $1 billion for a new program dedicated to fixing infrastructure that has divided communities.

Water Infrastructure: Makes a $55 billion investment needed to improve and replace water infrastructure.  The City of Buffalo alone is home to 100 miles of lead service lines.

Broadband: The bipartisan infrastructure deal makes a $65 billion investment in broadband, on top of funding previously included in the American Rescue Plan, to make sure every American has access to high-speed Internet.  A report just released by New York State Comptroller Thomas DiNapoli indicates one million New York households are without broadband access -including nearly 97,000 homes in Western New York.  Under the Infrastructure Investment and Jobs Act, New York would receive $100 million to expand broadband coverage.

Weatherization: The infrastructure deal makes a historic investment in the Weatherization Assistance Program, providing $3.5 billion toward projects that support long-term/energy-efficiency improvements in homes.

Public Transit/Airports: Includes the largest investment in public transit history - $89.9 billion for buses, rail, track, and stations - over the next five years.  New York would receive $9.8 billion in formula transit funding over the next five years.  This includes funding that removes barriers to accessibility with improvements targeted to address Americans with Disabilities Act (ADA) compliance.  Invests $25 billion nationwide and $685 million over the next five years in New York to support airport infrastructure.  These investments would boost the Niagara Frontier Transportation Authority’s (NFTA) ability to meet Western New York transportation needs.