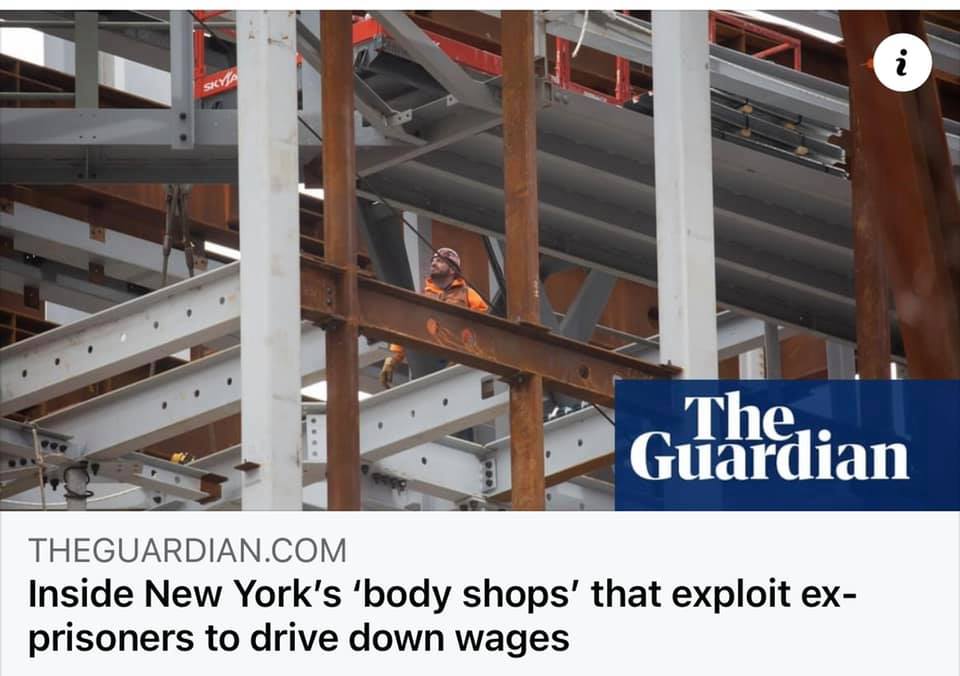 (NEW YORK CITY) - For years, Non-Union Labor Brokers in the New York City construction industry have targeted Workers who have recently been released from prison and are under parole supervision or other court surveillance programs, in a move that many say ensures low wages and poses a serious safety risk for Employees.

Known as “Body Shops,” these Labor Brokers hire and pay Workers to perform work for third party companies, profiting by taking a cut of the wages paid by the company.

The Labor Brokers end up competing in a race to drive down labor costs through wage suppression and cutting corners on training and safety.

Former prisoners are usually required to look for work as a condition of their release, so they may be willing to take any job they can get to avoid being returned to jail on a parole violation.

It’s not an idle threat: New York imprisoned individuals nearly three times the national average in 2019 for technical parole violations, consisting of 40% of all individuals admitted to prisons in the state.

In 2020, there were an estimated 9,173 re-entry Construction Workers in New York City, and construction work accounted for about 24% of all jobs for recently released prisoners.

Typical wages for these Workers is just above the City’s Minimum Wage, with no benefits, while Union Members in the New York City Construction Industry start at more than $28 an hour - plus benefits.

Shortly after being released from prison in New York City, John Simmons began working for a Construction Body Shop in July 2016, a job he was referred to through a work release program, making $13 an hour with no benefits.

Simmons said he struggled to make ends meet while working for the Construction Body Shop and he suffered from a toothache for three years because he had no insurance and couldn’t afford to get it treated.

When he first started working at the Body Shop, he was tasked with cleaning duties at job sites, until one day he was directed to start construction duties without any training.

“One day they told me this has to be done, they just put a power tool in my hand and told me to go to work,” explained Simmons. “The Body Shops have no respect, no care or concern for the Employees they hire.”

He wasn’t provided with Personal Protective Equipment (PPE) on the job, such as gloves or safety masks.

He recalled one incident where he was ordered, along with a few Co-Workers, to climb the scaffolding on the side of a construction site 12 floors up without a safety harness to put up a safety net in anticipation of a coming storm.

“It was like we were climbing monkey bars trying to protect the site from the storm,” added Simmons. “A lot of us were fearful that if we complained, if we said anything, that we would lose our job, and one of the stipulations of parole is that you must seek to obtain and maintain employment.  So we were scared to speak out.”

To Continue Reading This Labor News Report, Go To: www.theguardian.com/business/2021/sep/03/former-prisoners-new-york-city-labor-brokers-construction-industry