So, âWhat Are Unions Over There Doing Differently?â - Reuters Reports Amazonâs Reached An Agreement With Trade Unions In Italy, âPromising To Engage With Them More In The Running Of Operationsâ In That Country 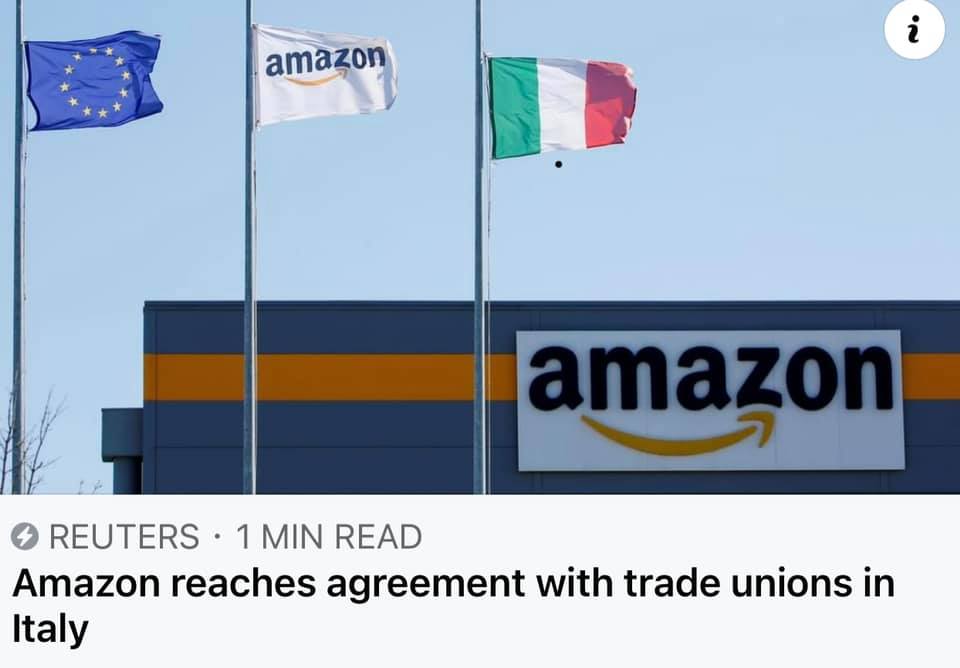 (MILAN, ITALY) - Amazon.com Incorporated has struck a deal with Italian Trade Unions promising to engage with them more in the running of operations in the country.

The framework agreement, seen by Reuters, comes shortly after news that a group of Canadian Workers are seeking to Unionize as Amazon continues to manage discontent among some Workers at its warehouses (Read More).

The world's largest on-line retailer has long discouraged Staff from Unionizing and staved off a high-profile attempt to form a Union in the United States this year.

But globally, it continues to face challenges - such as warehouse closures that Unions in France pushed for during the COVID-19 Pandemic.

In a protocol signed this week, Amazon Italia agreed to consult with Trade Unions on issues like new openings, job training and industrial relations with authorities.

"An important agreement and recognition of the role of the Unions, marking something new, at a world level, in relations with the E-Commerce Giant," said the head of the CGIL Union Maurizio Landini.

Earlier this year Amazon Workers in Italy staged a Strike over demands on Delivery Drivers in the pandemic in the first such action by Amazon's logistics operation in the country.

That protest came after a surge in Amazon's e-commerce business, triggered by the health emergency.

Amazon, which has invested more than $7 billion in Italy in the last 10 years and created 12,500 full-time jobs, said the agreement was proof of its commitment to engaging with Unions.

"We believe relations built on these grounds will encourage our investment strategy in the country," it said.

To Directly Access This Labor News Report, Go To: www.reuters.com/business/amazon-reaches-agreement-with-trade-unions-italy-2021-09-15/