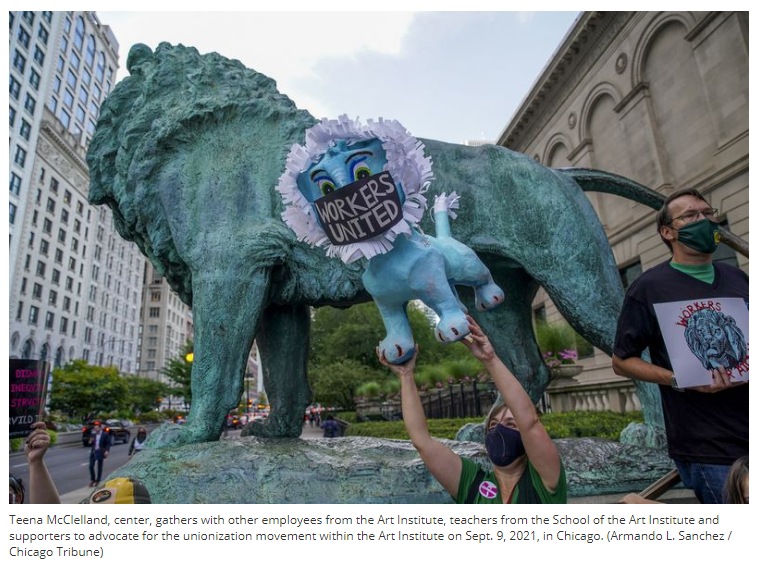 (CHICAGO, ILLINOIS) - There was an unusual exhibition held outside the Art Institute of Chicago on a recent evening where about 200 employees of the world-renowned art museum and associated school gathered along South Michigan Avenue to rally in support of a Unionization Movement at the iconic cultural institution.  If successful, the Art Institute of Chicago Workers United would be the first major Museum Union formed in Chicago.

The Employees are seeking higher wages and better working conditions, which were exacerbated by more than 200 layoffs and furloughs during the Coronavirus Pandemic.

“We lost many Staff and there was a reorganization that in effect doubled people’s workloads,” said Sheila Majumdar, 35, an Editor in the Museum’s Publications Department and a Member of the Union Organizing Committee. “The disconnect between what is reality in our day-to-day work and what leadership thinks is going on is just baffling.”

Majumdar, who joined the Art Institute nearly two years ago, said Workers need greater transparency from leadership and more input into their decisions, which have taken a toll on Employees over the last year.

Union Organizers are collecting signature cards from about 640 Employees at the Art Institute and the School of the Art Institute, hoping to get majority support and gain voluntary recognition for the Union from the museum without a formal vote.

The support card process, which began more than a month ago, has not yet reached critical mass among Employees - as yet.

Majumdar declined to say how many signatures had been collected.

The Union would be part of American Federation of State, County and Municipal Employees (AFSCME), which represents 10,000 Workers at 91 museums nationwide, and more than 25,000 Library Workers at 275 public and private libraries, including the Chicago Public Library.

In recent years, the Walker Art Center in Minneapolis, the Philadelphia Museum of Art, the Walters Art Museum in Baltimore and the Museum of Contemporary Art in Los Angeles have formed Unions with AFSCME, Union Spokesman Anders Lindall said.

While some Staff at the Museum of Science & Industry belong to the International Brotherhood of Electrical Workers (IBEW), most Employees at Chicago’s other major museums are not represented by Unions.

Founded in 1879, the Art Institute of Chicago is one of the oldest and largest art museums in the U.S., with a collection of nearly 300,000 works of art, including such famous paintings as “American Gothic” by Grant Wood, “A Sunday on La Grande Jatte” by Georges Seurat and “Nighthawks” by Edward Hopper.

Annual attendance is normally about 1.5 million people, but the numbers were down dramatically during the pandemic, with the Art Institute closed for more than half the year in 2020 and operating at reduced capacity for much of this year.