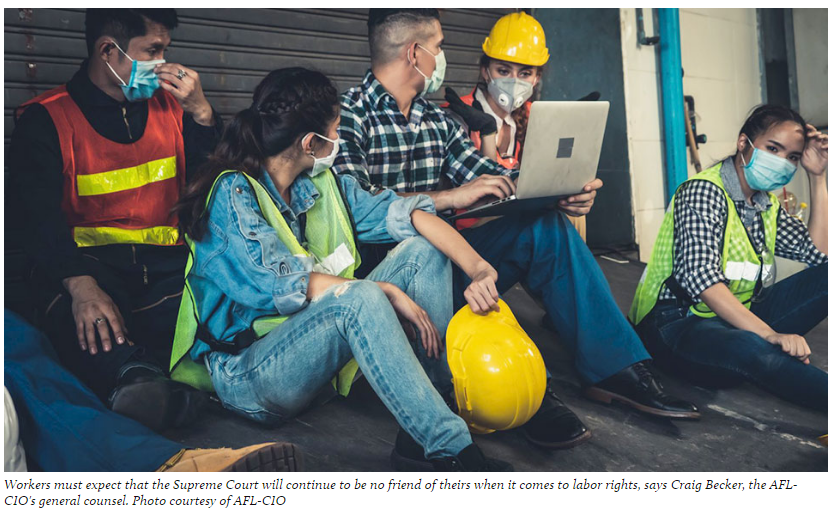 Speaking from his decades of Labor Law practice, the former National Labor Relations Board (NLRB) Member adds the Justices have been consistently Anti-Union for 50 years.

The United Farm Workers (UFW) and the California Agricultural Labor Relations Board lost on the specific issue: Getting limited access to farm fields for Union Organizers because the fields were the only places Organizers could reach the Workers.

Becker says Cedar Point is the latest in a string of Anti-Worker rulings the Justices have handed down.

The problem is so bad now, says Becker, an Obama-era NLRB Member, that Workers now do not trust the court.

He cited his own experience over 40 years of labor law.

“The Labor Movement - its Leaders, its Lawyers and its Members - no longer believe Labor Organizations and Working People seeking to act together to improve their wages, hours and working conditions can obtain a fair hearing before the (Supreme) Court,” Becker testified to Democratic President Joe Biden’s Commission examining potential reforms at the court.

Becker emphasized he is not speaking for the National AFL-CIO.

But noting Republican-named Justices have been a majority on the court for 50 years, Becker cited a string of Anti-Worker rulings stretching all the way back to 1992.

He mentioned and footnoted five, but didn’t cite another notable one - the Lilly Ledbetter’s Pay Discrimination Case.

The five-man GOP majority ruled Ledbetter could not sue for equal pay discrimination once she found out about it, 20 years after she was hired as a Supervisor at a Goodyear Tire Plant in Gadsden, Alabama.

She could only sue within the first 180 days of employment, they said.

At the end of her oration, RBG challenged Congress to fix that wrong.

It did, and the Lilly Ledbetter Act, removing the shackles on the right to sue, was the first Law Democratic President Barack Obama signed in 2009.

“It cannot be that we are wrong in every Labor case that comes before the court,” Becker told the Commission. “And if we are receiving a fair and unbiased hearing from the Justices, how can it be that the division among the Justices is identical each time we appear before the court?  I regret to say that only political predisposition can explain that pattern.”

To Continue Reading This Labor News Report, Go To: https://peoplesworld.org/article/afl-cio-lawyer-warns-of-incoming-fire-from-high-court-majority/