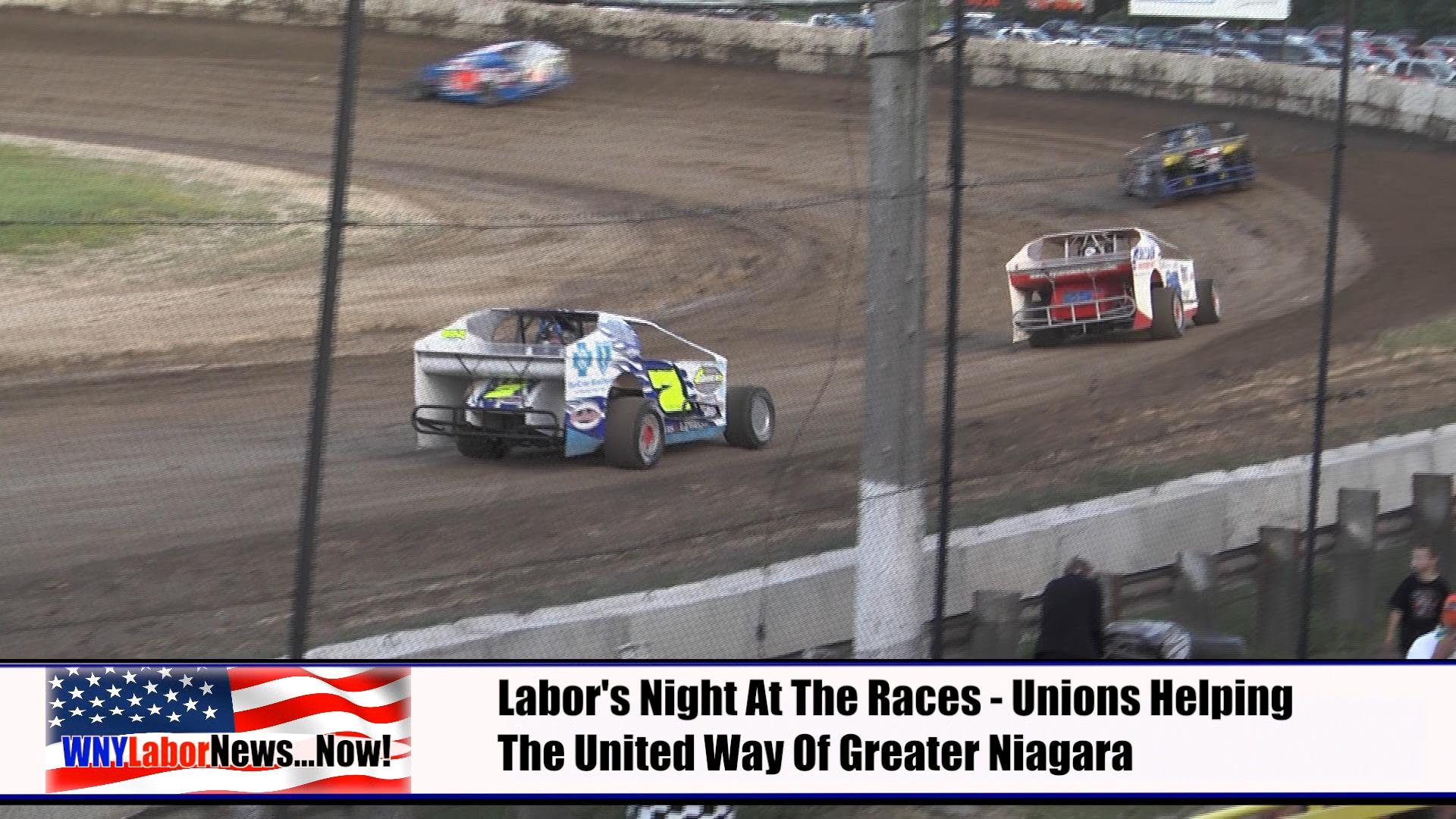 (RANSOMVILLE, NEW YORK) – For obvious reasons, the Coronavirus Pandemic put the Niagara-Orleans AFL-CIO Central Labor Council’s (NOLC) 2020 Labor’s Night at the Races annual fundraiser in mothballs.  But after a one-year hiatus, the July event returned, triumphantly drawing 600 Unionists and Friends of Labor to an effort that raised another $16,000 to help benefit a variety of United Way of Greater Niagara (UWGU) programs.

“It was ‘hard to take a step back’ last year, ‘but to be able not to lose our momentum was great,’” NOLC Labor Council President Jim Briggs tells WNYLaborToday.com. “We ‘weren’t really able to meet face-to-face’ through the pandemic, but Labor ‘did not forget’ (about the Labor’s Night at the Races fundraiser).  ‘They jumped back in.’  ‘It was really exciting to see.’”

A final tally showed there were 600 in attendance at the Labor Council’s Annual unique dirt track car racing event who were from Labor Unions or were supporters and/or Friends of Labor at Ransomville Speedway in Niagara County, all who took part in and enjoyed an outdoor picnic with hot dogs and hamburgers – and the opportunity to come back together - face-to-face and mask-to-mask - to restart friendships, in person.

“We were ‘hoping it would bounce back, but it’s really a testament to the commitment the Union Workforce has to the communities they live in.’  ‘They work to improve the quality of life for our community and are not afraid to share what is ours with others,” Briggs said.

The dollars raised goes to benefit 39 community programs that are funded by the UWGN across this Western New York County, including - but not limited to, the Boy’s and Girl Scouts organizations, drug and alcohol rehabilitation, youth counseling services, credit counseling services and a variety of family and health services.

“I was ‘very pleased’ with our turnout after its delay last year because of COVID over the past eighteen months,” UWGN/NOLC Labor Liaison Bill Jakobi told Your On-Line Labor Newspaper this week.

“People are ‘still interested in it and I cannot thank them enough.’  With the ‘need ever greater’ because of COVID, Labor ‘gives back to the community,’” he said.

Both NOLC Labor Council President Briggs and Jakobi made it a point to single out those businesses and Friends of Labor who annually help support Labor’s Night at the Races, including its major sponsors: Highmark/BlueCross BlueShield of Western New York; the Law Firm of Lewis & Lewis; the Law Firm of Maxwell and Murphy; and M&T Bank.

“‘Our success would not be realized without them,’” the two said.

A check presentation of the dollars raised via the Labor’s Night at the Races event will be made by the NOLC to the UWGN later this month (on Friday, September 24th) at the United Way’s annual Awards Breakfast, Jakobi said.

In addition, the NOLC will make its first presentation of the newly-named Russ Quarantello AFL-CIO Community Service Award at the breakfast.

Quarantello, the long-time Business Manager of International Brotherhood of Electrical Workers (IBEW) Local 237 in Niagara Falls, unexpectedly passed away at the age of 59 in August 2019.

Both Quarantello and his IBEW Local’s Membership were heavily involved in a number of United Way efforts and programs over the years.

The recipient, Jakobi said, will be the Quarantello Family.