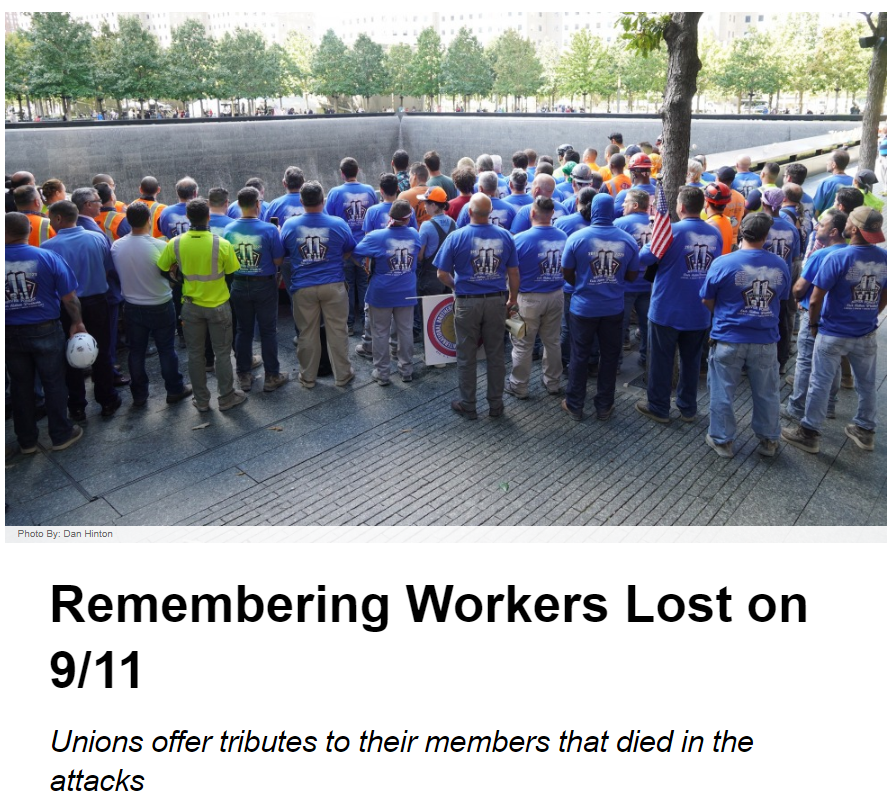 (NEW YORK CITY) – Over the weekend, we commemorated the 20th anniversary of the September 11th attacks.

On that bright, sunny day 20 years ago nearly 3,000 people lost their lives.

Many were at work or on their way to work when the planes struck the towers, the Pentagon and on United Flight 93 that crashed in Shanksville, Pennsylvania.

The Union hit hardest by the 9/11 attack were the Unions that represent the brave Men and Women of the Fire Department of New York (FDNY).

In commemoration of the 20th anniversary the International Association of Fire Fighters (IAFF) issued the following statement:

Every year on September 11th, the International Association of Fire Fighters and its 324,000 Members pause for somber reflection on that tragic day, now 20 years ago, that forever changed the world and the fire service.

On the 20th anniversary of the worst terrorist attack in American history, the IAFF has never forgotten the 343 FDNY Members lost that dark day and will always remember the families of our fallen, including the 250 Members who have succumbed to World Trade Center-related illnesses.

The IAFF honors those lost amidst the most daring rescue operation in American history by seizing on every lesson learned and every opportunity to protect our members and improve emergency response.

Over the last 20 years, the IAFF has been the driving force behind securing benefits for the families of the fallen, protecting the health of Ground Zero responders, expanding terror response training, fighting fire ground toxins and fully confronting behavioral health challenges.

This Union remains steadfast and determined to ensure our Members are ready for the next shift, whatever that may bring.

While the IAFF can take pride in this progress, this work can never pause.

As the threats against the citizens we have sworn to protect change, the IAFF will meet these challenges head on.

The IBEW lost numerous other Members in the years after due to 9/11 related illnesses.

“Twenty years ago the world stood still as the terrible attacks on the World Trade Center and the Pentagon shook us all.

On this solemn occasion, the Men and Women of IBEW remember all who lost their lives, including 21 of our own Brothers.

We lost 17 Members of Local 3 and four from Local 1212 that morning, all working on the job at the World Trade Center.

They brought honor to the Trade and their Union, and we cherish their memory.

But out of the horror, a spirit of solidarity and common purpose emerged as Working Families stepped up to support the victims and rebuild New York City.

I take great pride in the efforts of IBEW Brothers and Sisters who not only helped their neighbors in the days after September 11th, but worked to build back Lower Manhattan.

We will never forget what happened that day and we will always cherish the memories of those we lost and the frontline workers who gave their all to keep us safe.”

To honor the Police Officers that died in 9/11 the New York City PBA recently unveiled the September 11th Memorial Wall.

The memorial will be housed at the Union’s Headquarters and will included the names and pictures of the 23 NYPD Members killed on September 11th, 2001 and a tribute to the hundreds of Police Officers who have died of 9/11-related illness.

To Continue Reading This Labor News Story, Go To: https://ucommblog.com/section/community/remembering-workers-lost-911