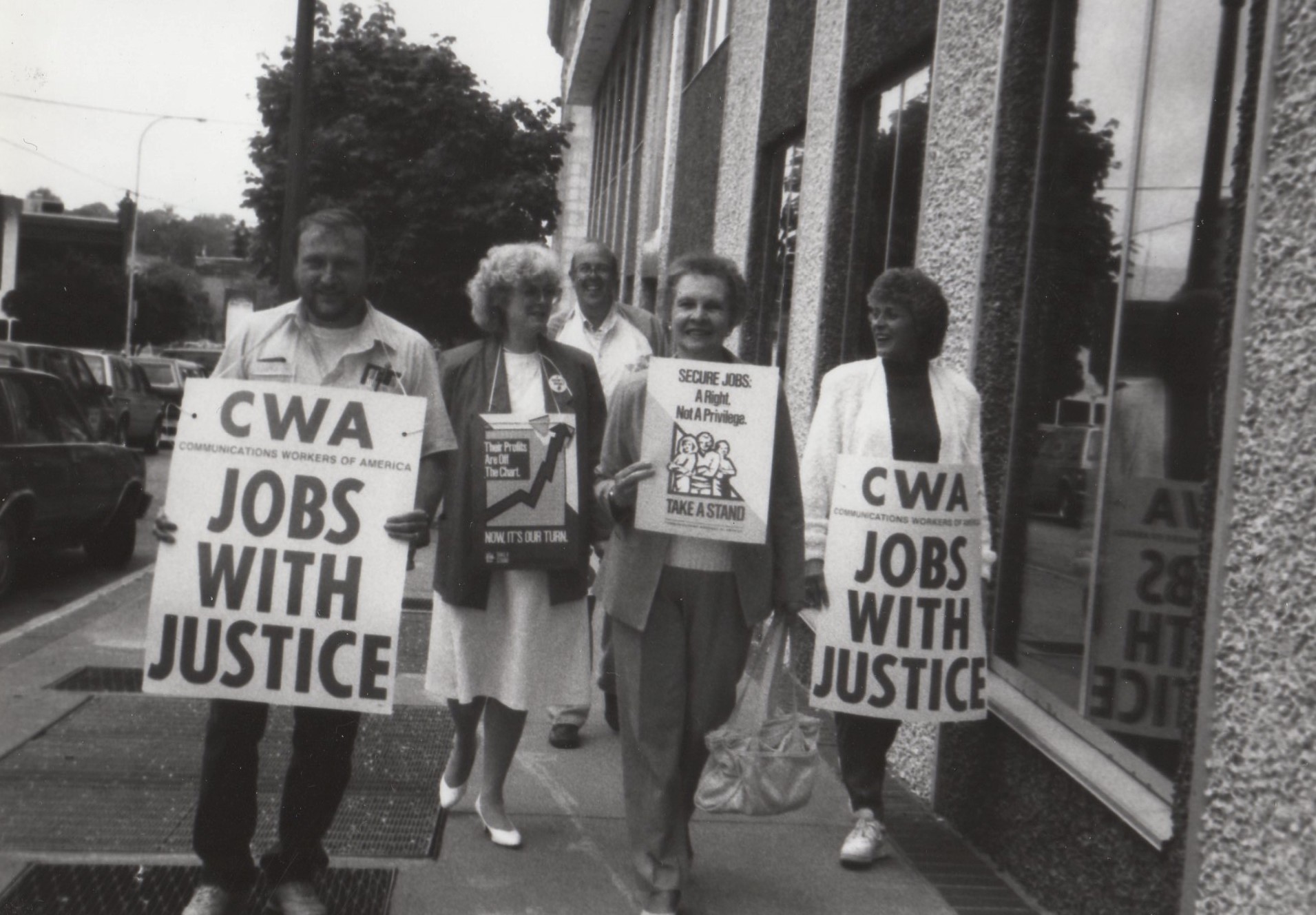 (LOCKPORT, NEW YORK) – Long-time Communications Workers of America (CWA) and Niagara County Union Activist Roger Chenez is being remembered for being “unselfishly different in order to make a difference,” “his passion (for) the Labor Movement” and for the work he did in “laying a foundation for the next generation”

Chenez’s son, Greg - who followed in his Father’s CWA footsteps and served as President of Local 1117 for 15 years, told WNYLaborToday.com: “While he was ‘known for his humor, ‘I have a unique perspective on my Dad, knowing him not only as my Father, but as a Union Guy.’  ‘It was hard to write this obituary because his accomplishments were so long.’  He was a ‘selfless Union person - unselfishly different to make a difference.’  The Union Movement ‘was his life and he helped lay the foundations for the next generation.’  ‘His passion really was’ the Labor Movement.” 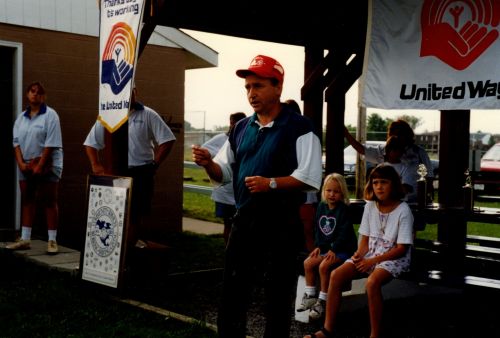 Roger Chenez - who worked for Verizon Communications where he was a Central Office Technician, retiring in 2001 after 32 years, also used his Union position to give back to the local community through his involvement in the United Way of Greater Niagara and the Niagara-Orleans Central Labor Council’s Workers Memorial in Niagara Falls (pictured above and below), his son said.

“He ‘helped so many’ sons and daughters of CWA Workers get scholarships through the E.J. Mays Scholarships, an annual golf tournament he helped found and through the Workers’ Memorial ‘to make sure those who died on the job were remembered,’” Greg Chenez told Your On-Line Labor Newspaper.

The E.J. Mays Golf Tournament is entering its 19th year and is credited with awarding more than 150 college scholarships over the years to the families of area CWA Members.

Chenez was recognized for his accomplishments in 2012, with the E.J. Mays Memorial Award for his leadership. 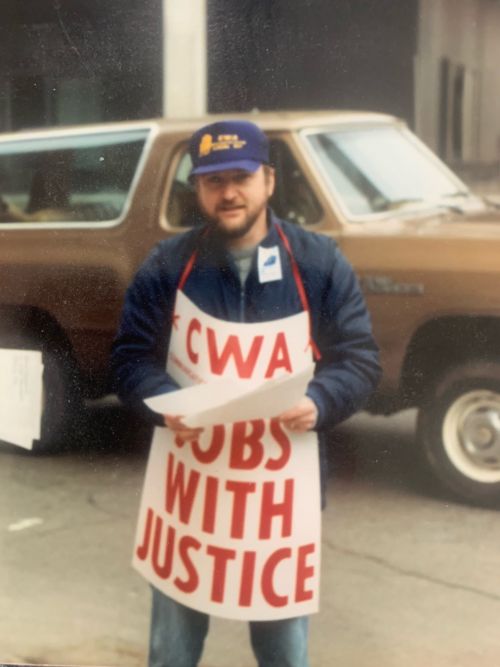 Fellow CWAer and CWA District One Area Director Debbie Hayes said of Chenez: “Even though he was President of a ‘small’ Local (in terms of Membership), he was ‘always there.’”

“He was a ‘complete and dedicated’ Unionist ‘who put hours and hours into his job’ - from walking a picket line to heading the CWA Western New York Council to the Alliance for Retired Americans.  Part of the CWA Triangle (Representation, Organizing and Community/Political Action) ‘is to serve your community.’  Roger ‘lived his life by the triangle.’  ‘He was just a good man and I am saddened’ by this news.  ‘I will miss him.’” 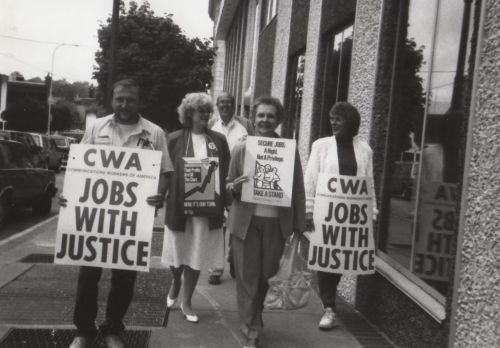 Asked what came immediately to mind when he learned of Chenez’s passing, Briggs said: “A friend, his solidarity and his honesty.”

“(Roger) was ‘fiery and fierce in defending Labor and kind and gentle when it came to his community,” Briggs continued.  “For a long time we used to call he and (CWA and Niagara County Labor Activist) Earl Frampton the ‘dynamic duo.’  (Roger) was a ‘very involved’ leader.  ‘He led by example - he walked the walk and talked the talk.’  ‘His legacy is that he helped create a place for (Working) People to maintain a quality of life.’”

“He was a ‘decent’ human being ‘and a great’ Union man.  We worked together, walked picket lines together (Roger Chenez, pictured above on the far left).  He and I started the CWA Strikers’ Relief Fund.  He always used to call me “Mr. CWA,” but ‘he was Mr. CWA’ - ‘(150%) Union,’” said Frampton (pictured below with Chenez). 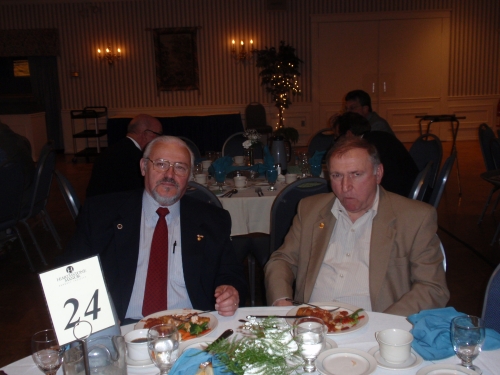 United Way of Greater Niagara/Niagara-Orleans Council Labor Council Labor Liaison Bill Jakobi (pictured below with Chenez) said: “(Chenez was) a ‘great’ Union Activist’ who was ‘always fighting the fight’ for Working People.’  He was a person ‘who believed in Organized Labor and the agenda that benefitted’ Working People.  He was a ‘great’ person.”

Relatives and friends may call Thursday, September 16th from 3 to 7 p.m. at the Prudden & Kandt Funeral Home, located at 242 Genesee Street in Lockport.

A Mass of Christian Burial will be celebrated Friday, September 17th at 10 a.m. in St. Brendan On The Lake, located at 3455 Ewings Road in Newfane.

Interment will be in St. Charles Borromeo Cemetery in Newfane.