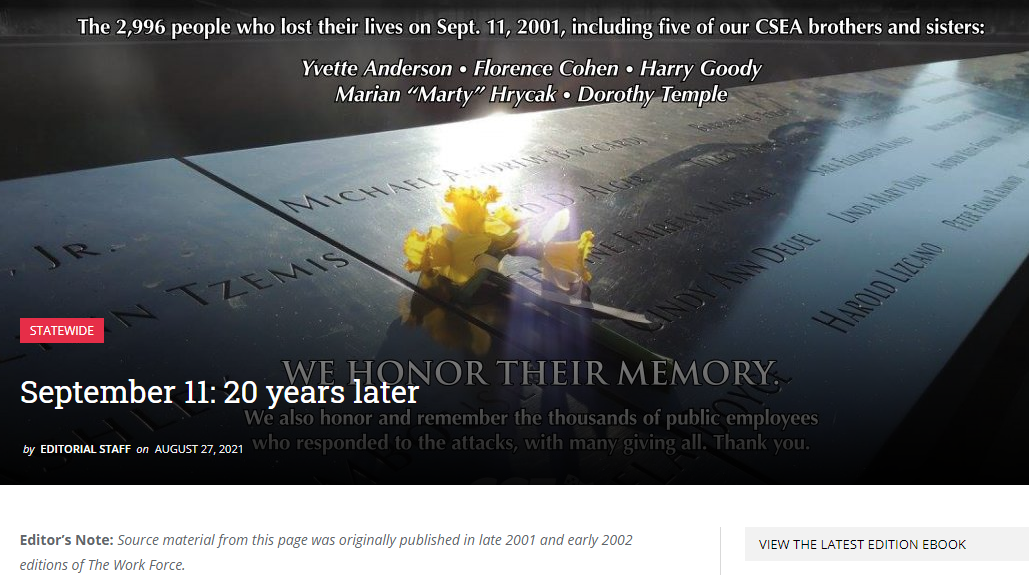 CSEA Editor’s Note: Source material from this page was originally published in late 2001 and early 2002 editions of The Work Force.

(NEW YORK CITY) - When the World Trade Center and Pentagon were attacked by terrorists on September 11th, 2001, Public Employees ran into the buildings to rescue the thousands of people inside, including other Public Workers.

Many of them never made it out.

Hundreds of Public Employees were among the nearly 3,000 people who died that day, including five Civil Service Employees Association (CSEA) Members who were employed at the New York State Department of Taxation and Finance.

They were among the 39 Employees at that agency who lost their lives.

Nearly as soon as the towers collapsed in lower Manhattan, CSEA Members from across the state mobilized help those directly affected by the attacks.

Numerous CSEA Members helped with rescue, recovery and cleanup efforts at the World Trade Center site, while other Union Members worked at efforts to ensure security at public buildings and that on-site Workers had adequate equipment and resources.

Yet additional CSEA Members worked at health care facilities to care for those injured and consoled those directly facing loss.

Twenty years after the attacks, we are still facing the effects.

Tens of thousands of people have been diagnosed with 9/11 related illnesses.

We will always remember all who were lost due to 9/11.

Longer versions of these profiles by David Galarza ran in the January 2002 edition.

Yvette Anderson, a Keyboard Specialist who worked for the state Bureau of Conciliation and Mediation Services, was active in the state Taxation and Finance (NYC) Local’s Social Committee and often cooked for Co-Workers.  Outside of work, Anderson had a passion for cooking and had wanted to pursue a career in the culinary arts.  Also active with her church, Anderson transported elderly parishioners to and from services and supervised youth ministry activists.  She was survived by her husband and two children.

Harry Goody, a Supply Assistant at the department’s Audit Division, was jokingly known as the Mayor at work who often gave his opinions, but he was also a helpful and humble person who had raised money for charities.  Goody also loved gadgets and trivia.  He was survived by his wife and three adult children.

Florence Cohen, a Keyboard Specialist, was known as an efficient Co-Worker who was described by one Co-Worker as always being “two steps ahead.”  She enjoyed collecting cups, newspapers and cartoon memorabilia, particularly Looney Tunes characters.  She was survived by a daughter.

Marian “Marty” Hrycak, an Investigator at the department’s Audit Division, had a passion for books, often reading several at one time.  Born in Austria, Hrycak particularly loved history books dealing with Russian and European history.  Shortly before the attacks, Hrycak and his wife were planning a Vermont vacation.  He was also devoted to his two adult children.

To Continue Reading This Labor News Report, Go To: https://cseany.org/workforce/?p=10232