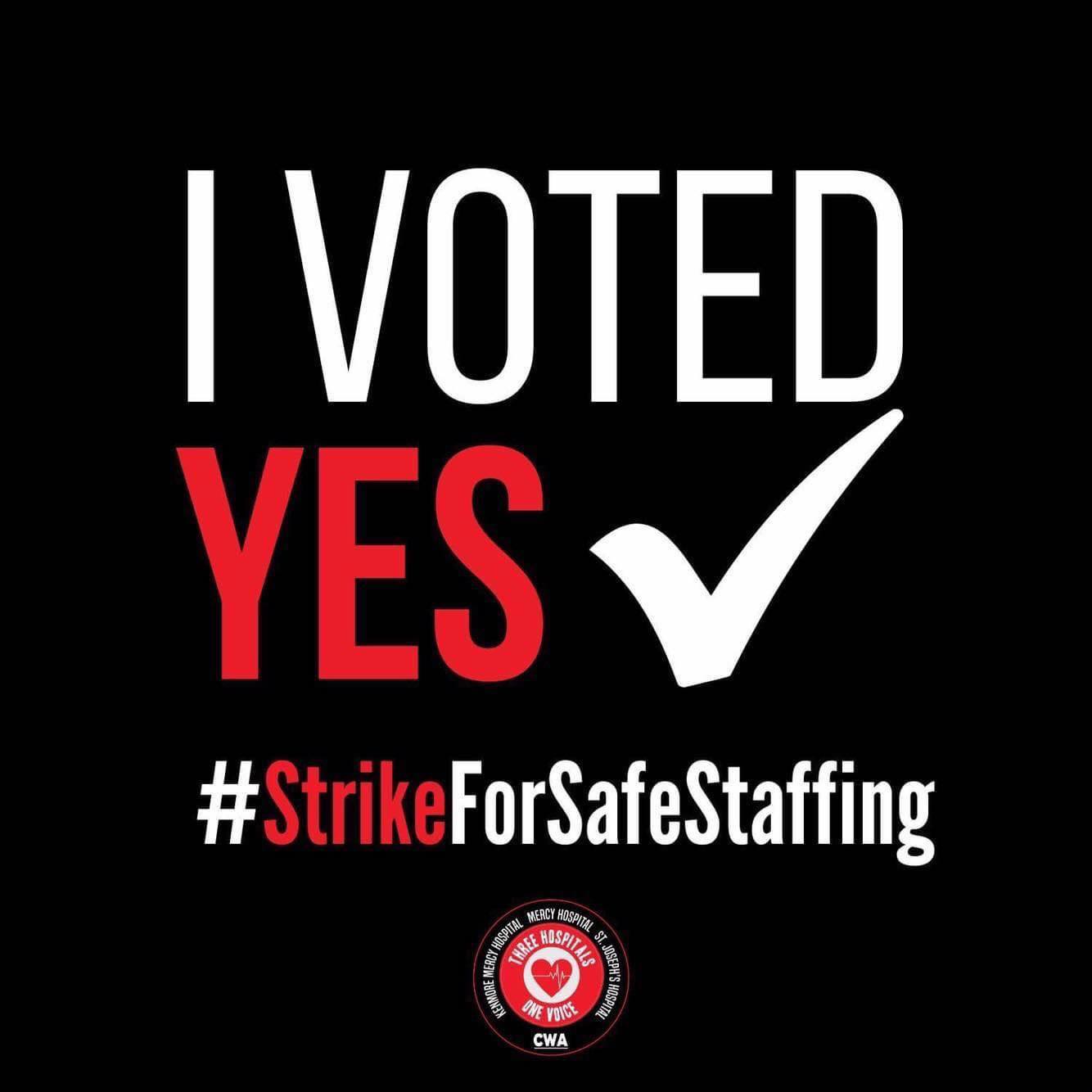 The Union-represented Health Care Workers have been raising concerns about worsening staffing shortages that are jeopardizing patient care.

Union Representatives say Catholic Health is refusing to settle a fair contract that will allow the hospital system to attract and retain the Workers needed to provide care.

The CWA Workers voted to Strike with 97% support and could walk out as early as October 1st when their contract is set to expire.

However, no Strike date has been set as of yet.

CWA Local 1133 President Jackie Ettipio, a 30-year Registered Nurse at Catholic Health Mercy Hospital in South Buffalo, said: “We voted to Strike - if necessary, because understaffing is so serious that it is becoming virtually impossible for Nurses to provide basic care to patients.  As a Nurse who’s dedicated my life to caring for people, there’s no way I can stand by and let that happen.  We are working around the clock as fast as we can, but when we’re expected to manage too many patients at once, the results are dangerous.  Patients are sitting soiled for lengths of time, falling trying to get to the restroom themselves, not getting fed in a timely manner and even waiting hours for medication.  Our community deserves much better.”

CWA Local 1168 President Cori Gambini, a Registered Nurse (RN), said: “We’ve been pleading with Catholic Health for months to invest in Front Line Workers so we’re equipped to provide the quality care our patients deserve, but there’s been no action, and we can’t keep going on like this, especially as COVID-19 cases rise in our community.”

CWA Local 1168 represents the Nurses and the Service Employees at Sisters of Charity Hospital-St. Joseph Campus.

“If Catholic Health can pay executives millions and millions of dollars, and pay over ($17 million) to Agency Staff, the hospital system can agree to a fair contract with the Health Care Workers who have been sacrificing our own health and well-being to provide care to Buffalo during the pandemic.  No one wants to go on Strike, but we are committed to doing whatever it takes to stand up for our patients and our families,” Gambini said.

Hundreds of new hires are needed to ensure safe staffing levels, as current Staff continues to deal with exhaustion and are increasingly concerned over their ability to provide adequate patient care as COVID-19 cases increase in Erie County, the CWA said.

Staff has publicly said they routinely working through lunch hours and breaks because coverage is unavailable.  Nurses also report working 12-hour shifts in the ICU (Intensive Care Unit) with zero breaks and a lack of necessary supplies to do their jobs properly, including basic essentials like urinals, pillows, sheets, blankets, washcloths, thermometers, vitals machines, blood tubes and syringes.

Rather than working to address understaffing at its hospitals, Catholic Health seeks a contract that, between a massive increase in out-of-pocket health care costs and the impact of inflation, would translate into major pay cuts for Workers over the life of the agreement, a move that will make it even harder to attract and retain the Nursing and Care Staff Buffalo needs, CWA Representatives say.

Meanwhile, Catholic Health CEO Mark Sullivan is paid $1 million in salary and the top 11 administrators at Catholic Health made more than $7 million combined in 2019, the Union said.

The Buffalo community has supported the Catholic Health Hospital Workers and has called on management to address staffing shortages, the CWA says.

To date, more than 1,300 people have signed a petition asking Catholic Health to settle a fair contract with their Health Care Employees and undergo efforts to attract and retain more Staff.