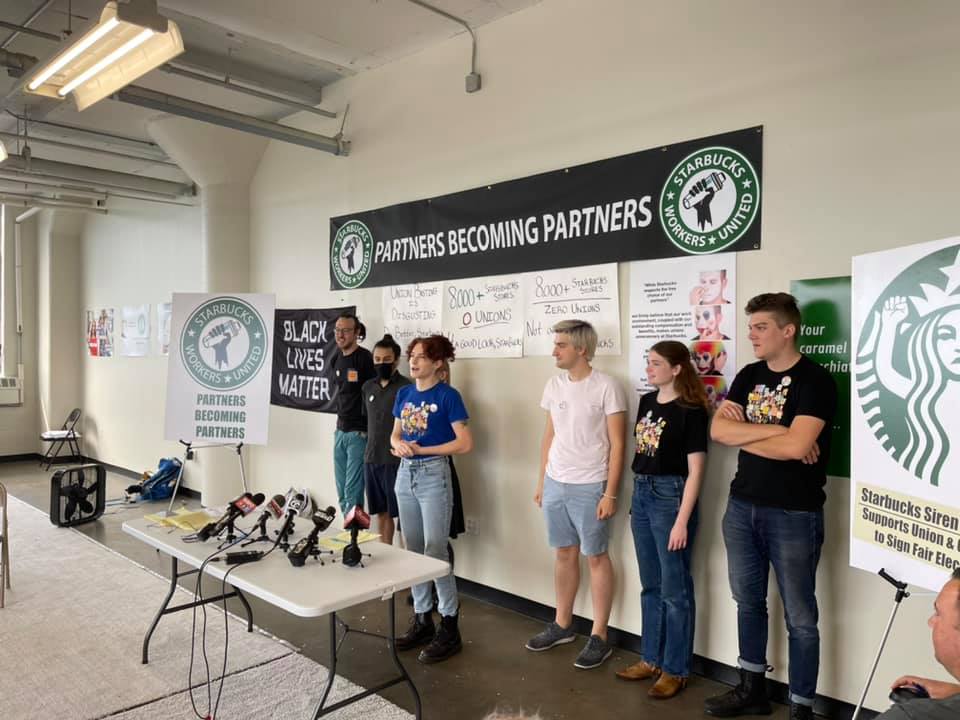 WNYLaborToday.com Editor’s Note: Pictured above, several area Starbucks Partners provided an update on their Union Organizing efforts on Wednesday (September 8th), saying Partners at two more Starbucks Coffee Shops have moved forward on filing for National Labor Relations Board (NLRB) Union Elections, bringing the total number of Buffalo area filings to five.  The Baristas were joined by U.S. Congressman Brian Higgins of Western New York, who told them: “Every Social Justice Movement ‘starts from the ground up and there is no better place than Buffalo for this organizing to take place.’”  (WNYLaborToday.com Photos)

(BUFFALO, NEW YORK) - Starbucks Partners attempting to Unionize at several stores in the Buffalo area thought it was strange that the company’s North America President would personally spend her Labor Day Weekend in Western New York, after not visiting the area in 17 years.  But the Workers soon found out that Rossann Williams was not in Buffalo to join the Starbucks Partners who marched in Buffalo’s Labor Day Parade - instead she was here to lead a Union-Busting effort by a company that makes $100 billion and pays no taxes.

“Starbucks ‘has a Union-Busting reputation and the company is sending in all of its corporate people to try to smash us,’” offered one Starbucks Partner who spoke during a news conference held Wednesday (September 8th) in Workers United Upstate’s Union Office in Buffalo.

“This indicates ‘you should be afraid if you’re going to Unionize,’ but ‘we are’ Starbucks ‘and we’re going to make sure we have a voice’ and that there’s a ‘real’ partnership,” said William Westlake, a Starbucks Partner employed at a store in Hamburg, located just outside Buffalo.

The Starbucks Partners who spoke at the news conference were supported by Workers United Upstate NY Leader Gary Bonadonna, Jr. and U.S. Congressman Brian Higgins of Western New York, who delivered a strong statement of support to the Workers as they seek to Unionize: “Every Social Justice Movement in America ‘starts from the ground up and your message is resounding’ as ‘Workers ‘organizing across this country is increasing.’  This is ‘not a partnership.’  A company ‘that will not listen to (you) is not a good partner.’  Starbucks made ($660 million) in profit this last quarter and (recently) ‘announced they are fully restored from the (Coronavirus) Pandemic.’  They are a ($100 billion) company ‘that pays zero in corporate taxes.’  A Starbucks VP ‘not here (in Buffalo) for seventeen years?’  I say, ‘Welcome to Buffalo!’ - ‘because there is no better place to organize than here in Buffalo.’”

The Starbucks Partners’ Union Election filings are part of a far-reaching movement of local Starbucks Baristas/Workers, who have come together under the name of SBWorkersUnited - with the goal is of establishing the first Union-contracted, corporate-owned Starbucks retail stores in the United States.

Starbucks currently operates more than 8,000 retail stores across the U.S., but none are represented by a Union contract.

In spite of what Starbucks Partners describe as an intense Union-Busting effort by corporate executives, including Starbucks North America President Williams, Workers from two more Buffalo-area locations - the Walden and Anderson and Transit Commons stores, are filing petitions with the National Labor Relations Board (NLRB) to hold official Union Elections.

The new NLRB filings come just over a week after three other Buffalo area stores - one on Camp Road in Hamburg, another in Suburban Cheektowaga and one on Elmwood Avenue in Buffalo, filed their own petitions for Union Elections.

“Why is the President of North America ‘spending her entire holiday (Labor Day Weekend) at so many (Starbucks) stores?’  ‘It was meant to intimidate and influence and it’s unethical and immoral,’” Workers United Upstate NY Leader Bonadonna said.

“She ‘wasn’t’ marching (with the Starbucks Partners) in the (Buffalo) Labor Day Parade.  ‘She was here because of the Unionization effort,’” he added. 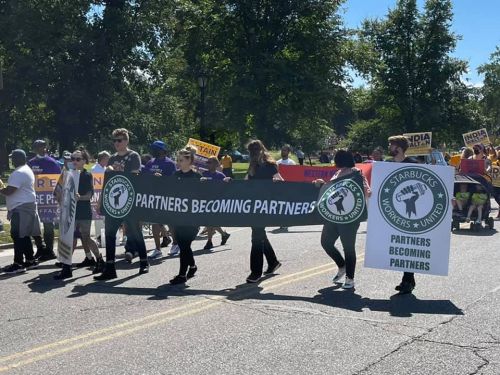 The day after the Starbucks Partners announced last week that they had gathered strong Union majorities at the three locations, Williams flew from Seattle to Buffalo with her corporate team and company representatives from other areas of the country to launch an Anti-Union Campaign, SBWorkersUnited Representatives charge.

Shortly thereafter, they said Starbucks Partners from around the Buffalo area began to report “an increased and overbearing presence of management on shop floors,” including store visits from Williams herself and other high-level executives.

Last week, Williams, along with the regional manager and partner resource manager, also hosted listening sessions with Buffalo-area Starbucks Partners, said SBWorkersUnited - who added according to Williams, the listening sessions were routine and not a response to the Partners’ Unionization Campaign.

“It’s ‘disrespectful and patronizing,’” said Casey Moore, a Partner employed at the Suburban Williamsville Place Starbucks. “Rossann called these conversations ‘open, honest, and routine.’ ‘Yet, no one has ever heard of top executives coming in for a listening session.’  ‘It’s clear Rossann and other management are here because we announced a campaign.’”

“These sessions ‘are completely one-sided,’” said Katie Cook, a Partner at the Walden and Anderson store.  “‘We want a Union so we can be true partners, so that our listening sessions can evolve into honest negotiations.’”

“Since the campaign started, lots of corporate executives ‘have swarmed’ the Buffalo-area stores, ‘more than I’ve seen in my four years with Starbucks,’” offered Michael Sanabria, who works at the company’s Transit Commons location. “I think they were ‘attempting to (determine) our frustrations so they can fix them and convince us to give up’ the campaign.  ‘I don’t count this as listening to our voices in the way a Union would make our voices heard.’”

In another development, Starbucks Partners at the three stores that filed last week for NLRB Elections were notified that they must attend mandatory one-hour meetings with management.

“They’re ‘shutting the store down early for them, which is - suspicious.’  They’re with upper management ‘and it’s honestly worrying me a lot,’” said Josh Pike, a Partner employed in Hamburg. “They’re ‘trying to intimidate us and instill fear, but it’s not working.’”

For Sanabria, this all contributes to a stronger sense of resolve for organizing.

Another Partner – Katie Cook, from the Walden and Anderson store, shared similar enthusiasm: “I am ‘very excited’ to be filing at my store.  ‘I believe our store will benefit significantly from a Union.’  We have had (95%) turnover from the time that I started a little less than a year ago.  ‘The enthusiasm is high among my Partners to finally have an equal’ partnership.”

On August 23rd, an Organizing Committee of more than 50 Buffalo-area Starbucks Partners sent a letter to Company CEO Kevin Johnson demanding a meaningful partnership in the operation of their stores and non-interference in the Union Election process.

The committee, which has since grown, has yet to receive a response from Johnson.