âWhen Unions Win, Workers Across The Board Win. Thatâs A Fact.â - President Biden Honors Union Workers In Event Held At The White House 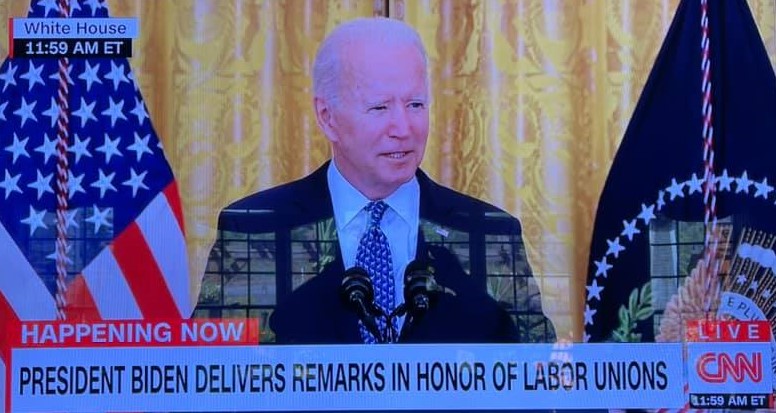 “In the economy my administration is building, instead of Workers competing with each other for the jobs that are scarce - everybody’s mad at me because now, guess what, employers are competing to attract Workers, having to raise pay.  ‘Worker Power’ is essential to building our economy back better than before,” Biden said.

“I’m so tired of trickle down.  When the Middle Class is booming and moving, everybody does well.  When Unions win, Workers across the board win.  That’s a fact.  Families win, community wins, America wins.  We grow.  And despite this, Workers have been getting cut out of the deal for too long a time.  America wasn't built by Wall Street.  It was built by the Middle Class and Unions built the Middle Class," Biden said.

The President touted his Build Back Better agenda, the massive $3.5 trillion spending package that Democrats are pushing in Congress: “My Build Back Better investments are going to allow us to keep and progress and move further in the years to come.”

He also called for Congress to pass the PRO (Protecting The Right To Organize) Act and send it to his desk “immediately.”

The Bill, which would stiffen penalties for employers who violate Workers’ Rights and strengthen protections for Employees against retaliation, is the top priority for Labor Unions - but it is stalled in the Senate.

“My measure of economic success is how families like mine growing up, Working Families busting their neck, how they’re doing.  Whether they have a little breathing room, whether they have a job that delivers some dignity, a paycheck they can support a family on,” he added.

He reiterated his campaign promise to be the most “Pro-Union President” and Walsh endorsed that, calling him the “Working Person’s President.”

To mark Labor Day on Monday, Biden visited the International Brotherhood of Electrical Workers (IBEW) Local 313 in Wilmington, Delaware to greet Workers and bring them sandwiches.

“If the last year has taught us anything, it’s what’s essential.  And what’s essential is you - not a joke - you and your Union Members.  Wall Street could go on Strike but all of a sudden in the middle of (Hurricane) Ida, every IBEW Member resigned, we’d be in real trouble,” he said.

Biden also said that Wall Street is “not all bad folks,” but that it was Unions who built America.

Walsh announced at the event that the Labor Department would be inducting Essential Workers of COVID-19 Pandemic into the Department’s Hall of Honor.

For More On This Labor News Story, Go To: https://thehill.com/homenews/administration/571304-biden-hails-unions-worker-power-is-essential?fbclid=IwAR3a1WQ6Xo6Jay1ptMtCYdUBt-mA3If0-QEDauMSHUjAu5KvDq1U-mnxAgc And www.fox17online.com/news/national-politics/biden-to-deliver-remarks-in-honor-of-labor-unions-wednesday

And To Read President Biden’s Full Remarks In Honor Of Labor Unions, Go To: www.whitehouse.gov/briefing-room/speeches-remarks/2021/09/08/remarks-by-president-biden-in-honor-of-labor-unions/