New Opportunities For Job Training For Careers In Carpentry, Construction Trades & Nursing Through A Pre-Apprenticeship Program Are Coming Soon For The Young & Underserved In Newburgh, New York 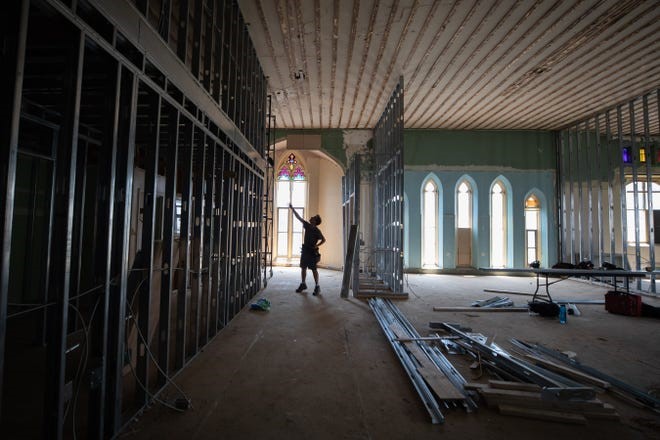 (NEWBURGH, NEW YORK) - Young Newburgh residents will soon have new opportunities to train for careers in carpentry, the Construction Trades and nursing through a Pre-Apprenticeship Program that will open in the historic First United Methodist Church on Liberty Street.  The program, called YouthBuild, aims to start next year and will also offer on-site child care to participants.

All told, the YouthBuild Program will provide training for 50 underserved City of Newburgh residents – age 16 to 24.

Participants must be out of school and able to commit to the training full time, according to eligibility requirements provided by RUPCO, the non-profit community development agency that helped secure funding for the program.

RUPCO is overseeing renovations in the church as part of the East End II project.

YouthBuild will be administered by LYNC, a Newburgh non-profit involved in community service.

Among its activities, LYNC - formerly the Blacc Vanilla Community Foundation, has worked with regional economic action non-profit RECAP to distribute food, home resources and protective equipment during the pandemic by forming the Newburgh Mutual Aid group.

The YouthBuild Program was founded in Harlem.

In Newburgh, it will also offer Trainees experience in building affordable housing with the hopes of having young Newburgh residents play a direct role in the city's revitalization.

YouthBuild will help its trainees with job placement for up to a year after they finish the program, according to RUPCO.

The church at 245 Liberty Street is being renovated into a 17,000-square-foot community and cultural hub called Highpoint.

The East End plan will provide a mix of old and new housing through historic renovation and new construction.

Highpoint, set to open next year, will place a special focus on boosting Women and Minority-led social enterprises, according to a press release.

The YouthBuild Program is essentially open to anyone, but LYNC President Melanie Collins described this as an opportunity to encourage young Women to learn more about the construction industry.

"Our mission is to inspire Women and Girls to become leaders in these male-dominated industries," Collins said.

"Our vision is that YouthBuild Newburgh students will go on to launch their own businesses in these fields and ultimately own and operate construction and development companies that reflect the diversity of our region," Collins added.

YouthBuild will be funded by a $1 million grant from the U.S. Department of Labor that was awarded last month to RUPCO and LYNC.

The grant is just one of four awarded in New York State this year and the only one given to a mid-Hudson Valley group, according to the release.

To Directly Access This Apprenticeship And Training Labor News Story, Go To: www.recordonline.com/story/news/2021/09/08/newburgh-youth-program-offer-construction-nursing-training/7984285002/