In California, A Women-Led Coalition âIs Fighting For The Passage A New Anti-Sweatshop Lawâ

According To The Garment Workers Centre, Garment Workers In Los Angeles Earn An Average Of $5.50 An Hour While The Cityâs Minimum Wage Now Stands At $15 An Hour As Of January 1st, 2020 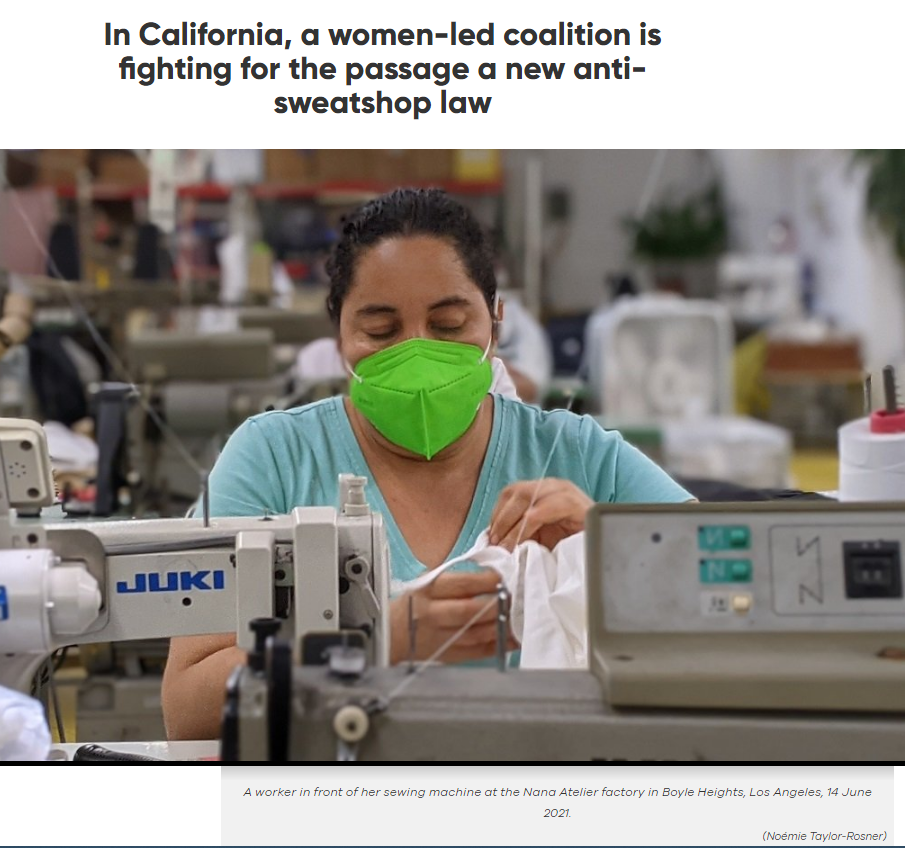 (LOS ANGELES, CALIFORNIA) - Maria, 58, rapidly sews one piece after another, deftly operating her sewing machine with the kind of skill that comes from her many years of experience as a Seamstress - but at just three cents for each label sewed and five cents for adding a trim to a piece of clothing, she never manages to make more than $6 an hour.

Maria, who is Undocumented, has been working for 30 years in the fashion district of Los Angeles - the capital of the United States’ garment industry, which employs more than 40,000 people, the vast majority of them Immigrants.

“As long as I’ve done this job I’ve always been paid by the piece rather than by the hour.  And the pay has never gone up,” she says.

The working conditions she faces aren’t too dissimilar to those found in some sweatshops in Asia.  Despite the high temperatures that prevail most of the year in Los Angeles, most factories are neither air-conditioned nor ventilated.

“Many Workers even avoid drinking so they don’t waste time going to the toilet.  My colleagues often develop kidney problems because of this,” she says.

A few months ago, Maria joined a female-led coalition fighting for passage of the Garment Worker Protection Act (also known as Senate Bill 62), a Bill currently being debated in the California State Legislature that would put an end to exploitative practices in the garment industry.

“SB62 targets the problem of wage theft, which is particularly prevalent in the fashion industry,” explains California State Senator Elena Maria Durazo, who authored the Bill.

“The garment industry in California owes more than ($7 million) in unpaid wages,” says Durazo, who understands the problem well.

“Despite the passage of several pieces of legislation over the last few decades aimed at ending the problem of unpaid wages, not much has changed.  Factories still manage to take advantage of loopholes in the system to continue their practices,” she says.

“The biggest problem with the Piece-Rate Wage System is that it is one of the main drivers of wage theft,” says Marissa Nuncio, who serves as the Director of the Garment Workers Centre, an organization that advocates for the rights of Garment Workers in Los Angeles.

“Prices have been stagnant for decades and can be as low as two cents apiece even though the minimum wage has increased in California.  Continuing to pay Workers in this way prevents them from meeting the minimum wage.  At the rates charged, they would have to sew an incalculable number of pieces in an hour that no human is capable of,” she said.

To Continue Reading This Labor News Story, Go To: www.equaltimes.org/in-california-a-women-led?lang=en#.YTi0rI5KiiN