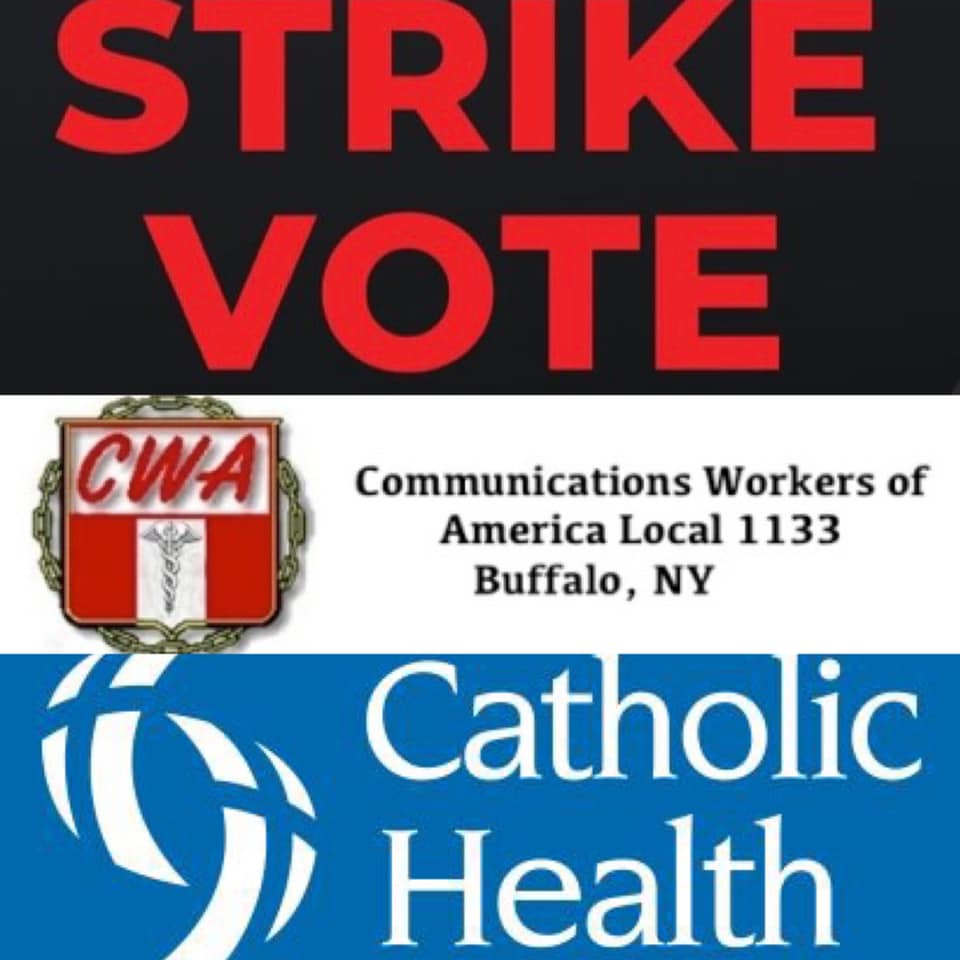 (BUFFALO, NEW YORK) - Growing increasingly concerned over worsening Staffing shortages that are jeopardizing patient care as COVID-19 cases increase across Erie County, Communications Workers of America (CWA)-represented Nurses, Technical, Service and Clerical Staff employed by Mercy Hospital of Buffalo will vote this week - on Wednesday and Thursday - whether to authorize a Strike should it be necessary.

If the Workers vote to authorize a Strike, they could walk off the job as early as October 1st when their contract expires.

Results of the Strike Authorization Vote will be announced on Friday (September 10th).

After more than a year of life-saving work helping Buffalo get through the COVID-19 Pandemic, Hospital Staff are “exhausted and see no action from the hospital system to attract new hires,” CWA Officials said.

Staff routinely works through lunch hours and breaks because coverage is unavailable and report a lack of necessary supplies to do their jobs properly, the Union adds.

Front Line Workers are also calling for the establishment of Safe Staffing Ratios to help ensure quality patient care, but they say Catholic Health is refusing to do that.

Rather than working to address understaffing, Catholic Health seeks a contract that would significantly cut Workers’ health care, freeze some Workers’ wages and freeze pensions, a move that will make it even harder to attract and retain the Nursing and Care Staff Buffalo needs, CWA Representatives said.

Meanwhile, Catholic Health CEO Mark Sullivan is paid $1 million in salary and the top 11 administrators made more than $7 million – combined, in 2019, the Union said.

CWA Local 1133 President Jackie Ettipio, a 30-year Registered Nurse (RN) at Mercy Hospital, said: “Despite deep staffing shortages and limited supplies, Nurses and other Front Line Workers at Catholic Health have been risking our own health and the health of our families to provide care to Buffalo during the pandemic.  The staffing crisis at our hospitals is only getting worse and after months of us pleading with Catholic Health to take our concerns seriously and work with us to protect our patients, we’re at a breaking point.  Striking is a last resort and we want nothing more than to work with Catholic Health to settle a fair contract that will prioritize patient care and the safety and well-being of Employees.”

CWA and its Bargaining Team have been trying to work with Catholic Health to settle a fair contract that recognizes the essential contributions of Front Line Workers and one that allows the hospital system to compete in a national Health Care Worker shortage - but Catholic Health has refused to bargain fairly, Union Representatives said.

Instead of coming to the table in good faith to address its staffing crisis, Catholic Health has used scare tactics and legal maneuvers to mislead and bully Employees, they charged.

Most recently, the hospital system illegally attempted to “deal directly” with Workers during bargaining by sending Employees inaccurate and incomplete communications about their proposed cuts to benefits, the Union also said.