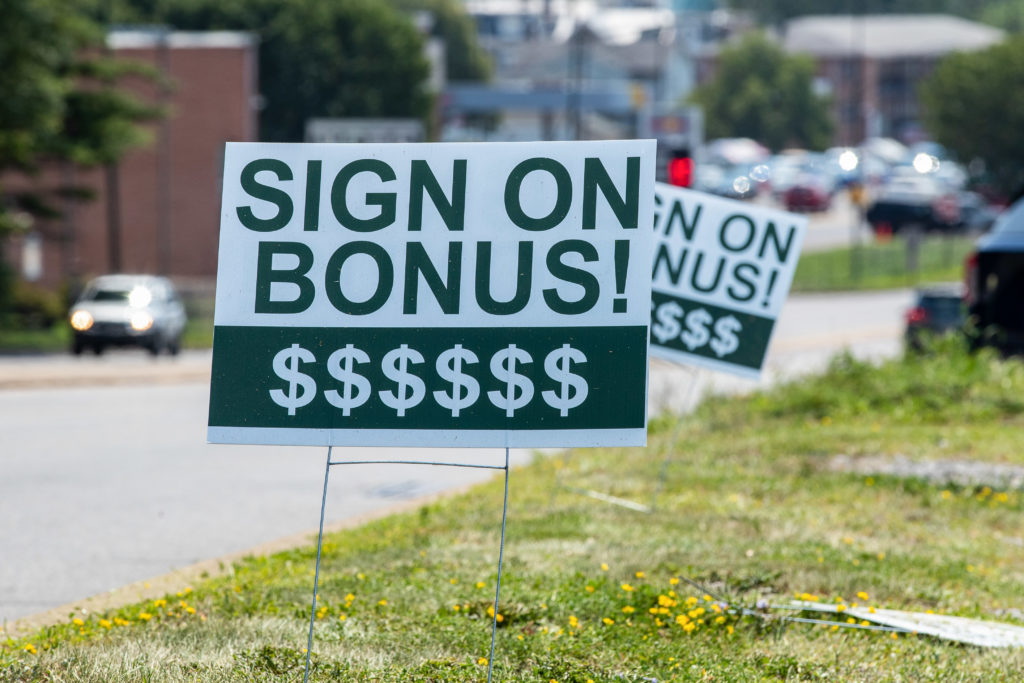 (NORFOLK, VIRGINIA) - When negotiations failed to produce a new contract at a Volvo plant in Virginia this Spring, its 2,900 Workers went out on Strike.

The company soon dangled what looked like a tempting offer - at least to the United Auto Workers (UAW) Local Leaders who recommended it to their Members: Pay raises, signing bonuses and lower-priced health care.

Yet, the Workers overwhelmingly rejected the proposal.

And then a second one, too.

Finally, they approved a third offer that provided even higher raises, plus lump-sum bonuses.

For the Union, it was a breakthrough that wouldn’t likely have happened as recently as last year.

That was before the Coronavirus Pandemic spawned a Worker shortage that’s left some of America’s long-beleaguered Union Members feeling more confident than they have in years.

With Help Wanted signs at factories and businesses spreading across the Nation, in manufacturing and in service industries, Union Workers like those at the Volvo site are seizing the opportunity to try to recover some of the bargaining power - and financial security - they feel they lost in recent decades as Unions shrank in size and influence.

“We were extremely emboldened by the labor shortage,” said Travis Wells, a Forklift Driver at the Volvo plant in Dublin, Virginia, near Roanoke. “The cost of recruiting and training a new workforce would’ve cost Volvo ten times what a good contract would have.”

In addition to 12% pay raises over the six-year contract, the Volvo deal provided other sweeteners: Many of the Union Workers will be phased out of an unpopular two-tier pay scale that had left less-senior Workers with much lower wages than longer-tenured Employees.

All current Workers will now earn the top hourly wage of $30.92 after six years.

And by holding out as long as they did, the Workers achieved a six-year price freeze on Health Care Premiums.

Volvo conceded that it’s had difficulty finding Workers for the Virginia plant, but says it offers a strong pay and benefits package “that also safeguards our competitiveness in the market.”

The improvements achieved by the Volvo Workers in Virginia provided a case study of how Union Workers may be gaining leverage as companies scramble to find enough Workers to meet customer demand in an economy that’s been steadily recovering from the pandemic recession.

The growing demand for labor has also benefited lower-paid Workers at restaurants, bars and retailers, but the financial gains for Union Workers mean that a category of jobs that have long been seen as supportive of a Middle-Class lifestyle may now be moving closer to that realty.

Chris Tilly, a Labor Economist at UCLA, said the shortages among Burger-Flippers and Cashiers is notable “because those low-end jobs more typically have a labor surplus.”

“But there are also shortages,” Tilly noted, “at higher skill levels - including jobs where there are chronic shortages like Nurses, Machinists and Teachers.”

To Continue Reading This Labor News Story, Go To: www.pbs.org/newshour/economy/labor-shortage-leaves-union-workers-feeling-more-emboldened