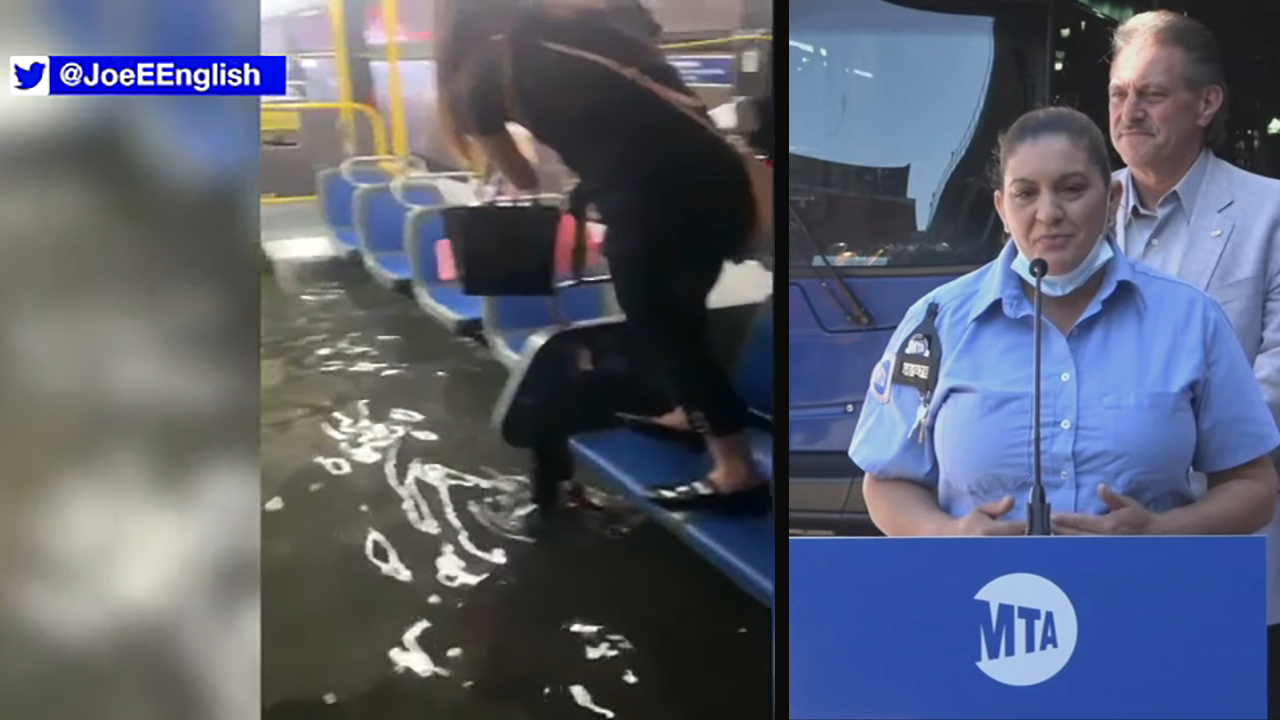 (NEW YORK CITY) - A New York City Bus Operator is being heralded in recognition of her heroic actions during Hurricane Ida.

Rosa Almonte (Pictured Above/ABC7 New York Photo), an eight-year veteran of the Metropolitan Transportation Authority (MTA) and mother of three, was driving her Q58 bus route in Queens on Wednesday (September 1st) when three-to-four-foot flood waters filled the road in front of them.

In video captured by a passenger, water is seen inside the bus itself, prompting riders to stand on their seats.

However, as water dramatically swirls both inside and outside the bus, Almonte remains calm, navigating through the treacherous waters.

Her deeds were so impressive that Governor Kathy Hochul talked about them during a press conference at the Fresh Pond Depot in Queens, after the historic storm was over.

Praising Almonte, Hochul said: “People were literally driving down rivers, many vehicles were abandoned, people fled for their lives, but people still needed to get where they had to go and get to the safety of their homes.  And how did they get there?  When the subways were shut down?  It was the Bus Drivers, the Bus Operators who never left their posts.  They sat there, they welcomed riders in, they took care of them, they gave them the assurance that, ‘I’m going to take care of you, I’m going to protect you, I’m going to get you where you’re going.  The water was in the vehicle, people were literally standing on their seats to make sure they did not drown inside a bus.  (Almonte) did what it took to make people get through there safely.  She didn’t pull over and say, ‘I’m outta here, I’m going home.’”

Hochul hailed Almonte’s “bravery” and “courage” and said: “As the Governor of the State of New York, representing over twenty million people, from the bottom of my heart, Thank You.”

Almonte herself spoke about the ordeal, focusing on the facts and appearing surprisingly humble given the amount of attention she has received.

“(I wanted to) take passengers to a safe place,” she said.

“I’m going to go through this water, take my passengers to the other side,” she added, describing her thought process as she drove through the raging flood.

Almonte emphasized that all her Transit Workers Colleagues are “heroes.”

Speaking on their behalf, she said: “We are just happy to serve.”

J.P. Patafio, Transit Authority Surface Vice President, said: “When everything was falling apart it was the Bus Operators that were out there making sure that people were safe and that’s exactly what she did.”