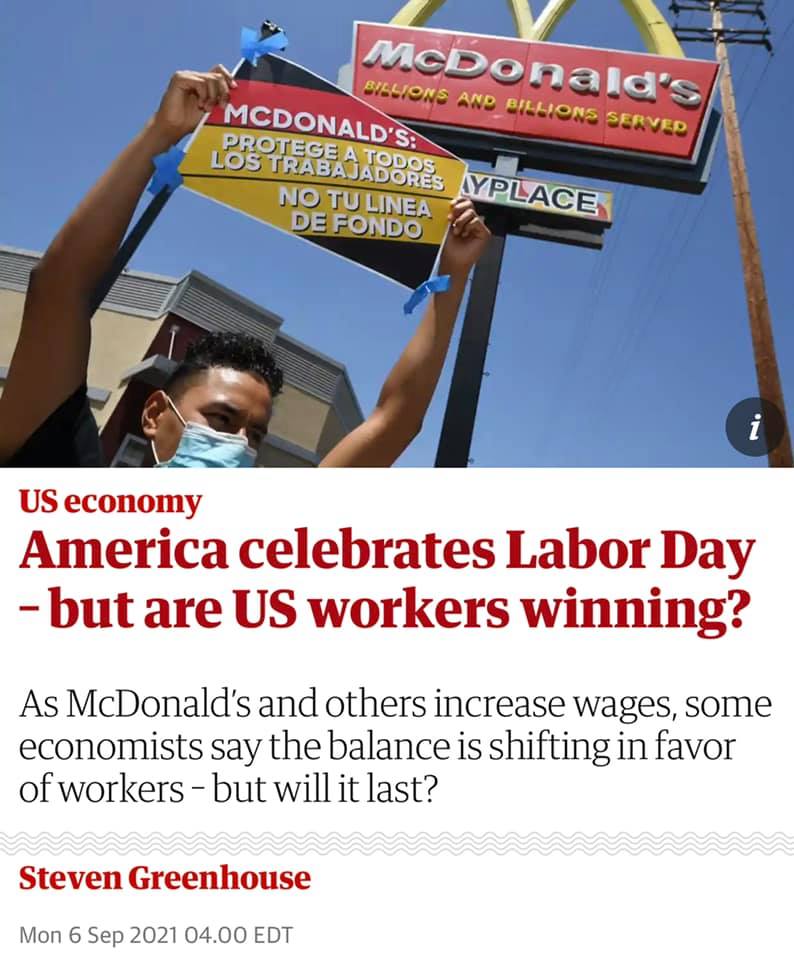 As the United States celebrated Labor Day, many employers are still struggling to find enough Workers.

McDonald’s, Chipotle, Walmart and many other companies have announced sizable wage increases to attract Workers and some economists argue American Workers have the most bargaining power they’ve had in years.

Many people, from low-wage workers to White House officials, are cheering this news, but there’s a fierce debate about this increased bargaining power.

Late last week the U.S. released disappointing jobs figures that show the Coronavirus is still affecting hiring - and while some argue this new-found Worker Power will be a longer-lasting phenomenon that yields years of better pay for Workers, others believe it’s just a temporary blip.

Already this year, Chipotle, CVS and Walgreens have raised their minimum pay to $15 an hour, while Costco has raised its minimum to $16.

Heidi Shierholz, Senior Economist at the Economic Policy Institute (EPI) - a Progressive Think Tank, applauds these increases, but sees them as largely a response to a temporary labor squeeze in specific industries, especially the hospitality industry.

Shierholz fears the increase in Worker Bargaining Power will be short-lived: “There’s nothing I see that gives me any feeling that it’s going to be permanent.  The reasons we’ve seen wage stagnation and declining economic leverage for Workers is four decades of policy choices.  A couple of months like this is not going to wipe that out.  How can anyone seriously think this will be a lasting situation?”

Dube says numerous factors have made many Workers think twice about returning to their jobs - especially to low-wage jobs - and that hesitation has given them more bargaining power.

On top of that, many Workers hesitate to return to work because of difficulties finding childcare and continuing fears about COVID-19.

“People have become more discerning about which jobs they’re willing to take,” Dube said. “A reasonable case can be made that we may be looking at a more extended period where Workers have greater power.”

Dube acknowledges that many of the factors that have let Workers remain on the sidelines will dissipate - their savings may dwindle, childcare will improve, the $300 jobless supplement have ended, but when the pandemic recedes, Dube notes, the jobless rate is likely to fall, strengthening Worker Bargaining Power.

Dube says wage norms have been changing for the better as many employers raised pay because of a low jobless rate.

To Continue Reading This Labor News Report, Go To: www.theguardian.com/business/2021/sep/06/america-labor-day-workers