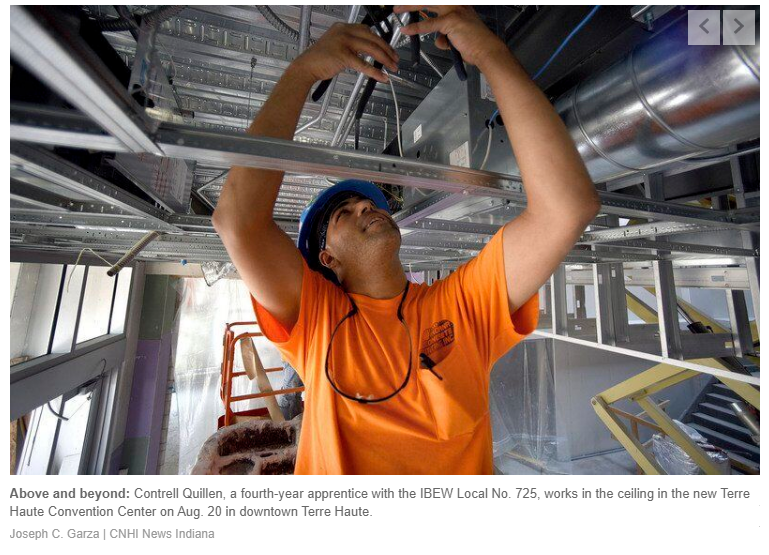 (TERRE HAUTE, INDIANA) - As he put on his white hard hat, Brian Richards crossed Wabash Avenue to enter into the construction zone of a downtown convention center in Terre Haute. Richards is a third generation Electrician, following in the footsteps of his grandfather and father.  Additionally, all three also served in the military, with Richards serving in the U.S. Marines from 1992 to 1997.  His grandfather and father each served in the U.S. Navy.

“I kind of bucked the trend,” Richards chuckled when talking about his family’s military service.

In 1998, he started as an Apprentice to become an electrician through the International Brotherhood of Electrical Workers (IBEW) Local 725 - now he’s Project Foreman for Sycamore Engineering working on the new Terre Haute Convention Center in downtown Terre Haute, with a crew of seven Workers.

“On this project alone, we are responsible for a smart lighting system with LEDs, power in the building and in the ballroom area, there is audio/visual displays with two large projector screens, plus we will have a sign out front, and lights in conference rooms and kitchen area.  There is quite a bit of work here,” Richards said.

“Even after all this time, I still enjoy what I do,” Richards said. “I like the challenge.”

Among Workers at the convention center is Contrell Quillen, 33, who was born in Fort Wayne, but graduated in 2006 from Sullivan High School and is now a resident of Terre Haute.

He joined the IBEW in 2018 and is a fourth-year Apprentice.

“Seems like Unions take care of people,” Quillen said of his decision to join the IBEW.

“I chose (the IBEW) because it is a way to use my brain and my body.  We are kind of ‘Blue Collar nerds.’  I enjoy the science and being able to use a lot of math.  We have to really know about everything to piece together our entire objective,” he said.

Brent R. McCoy, Assistant Business Representative for the IBEW Local 725, said the Union has a five-year Apprenticeship Program where “you earn money while you learn and work on the job.”

Apprentices also undergo schooling, either in a classroom or due to COVID-19, some are held virtually.

Starting Apprentices earn about $19 an hour, while a full Journeyman earns $40 an hour, with health and retirement benefits, McCoy said.

IBEW, which has been in the Wabash Valley for 108 years, works through the National Joint Apprenticeship & Training Committee to train its workforce, McCoy said.

Some Wabash Valley contractors that its members work at include Sycamore Engineering, HEF Services, Crown Electric and NRK.

The Electrical Workers Union this year has 150 Apprentices, with an active Membership of 718, McCoy said.

To Continue Reading This Apprenticeship And Training Labor News Story, Go To: www.newsandtribune.com/ibew-apprenticeships-lead-to-successful-careers/article_e151bcd0-0f33-11ec-94ad-0fb1d8d2b60b.html